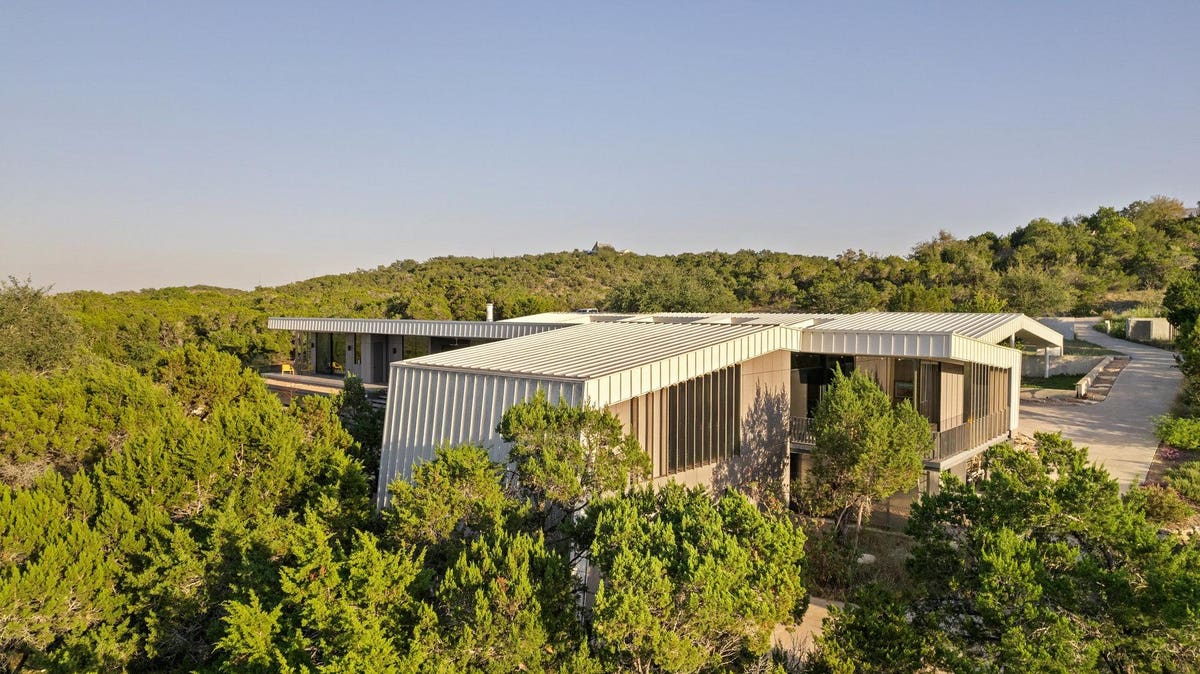 Deep in the heart of Texas, a newly finished residence suffused with boreal light and featuring miles of unobstructed Texas Hill Country views has swaggered onto the Lone Star State market.

Located 25 miles west of Austin, the 4,100-square foot home is sited near Dripping Springs––in 2014 named the state’s first International Dark Sky Community. An evening stroll around the home’s nearly two acres––graced with oak, Ashe juniper, Mexican buckeye, madrone and other vegetation––proves that in Texas, the stars at night are indeed big and bright.

“There will never be high-density development out here,” says Tom Griffith, who with his wife, Dana Griffith, purchased the then-incomplete home in 2016, finishing what the original owner began in 2014. He also cites the surrounding ranch developments that are either covered by a conservation easement or will be limited to 20- to 40-acre parcels.

A 40-foot pool fronts the $3.25 million retreat beneath an extensive shade pavilion that echoes the main house. Five apertures executed in square and rectangle shapes punctuate the structure’s roofline, revealing a cobalt sky during the day and those big bright stars at night.

“We’re great fans of James Turrell, so those are an homage to him,” explains Griffith. “You lie in the pool and look up––it’s absolutely gorgeous. The sunlight reflects off the water and dances on the ceiling and surfaces. Just beautiful.”

Among other works, “Light and Space” artist Turrell is known for his nearly 90 Skyspaces, chambers with ceiling apertures that open to the sky. A Skyspace termed The Color Inside is permanently installed near the Griffith residence at The University of Texas at Austin.

The property’s cantilevered roof and some exterior walls are clad in seam metal baked with off-white Kynar, a resin that drastically reduces energy consumption. “It’s got a high albedo so it reflects considerable heat,” explains Webber + Studio founder David Webber who mastered the design and most recent build. Albedo is the measurement of light reflected off an object after striking it without any absorption.

The roofing choice and the home’s optimally sited shade structure are critical given the region’s long, hot summers and short mild winters. American Fiber Cement mantles some of the exterior, completing the fire-resistant build.

The home’s exceptional linearity is apparent upon entering. To the right are the primary suite and an office. To the left, the kitchen, living and dining rooms, two guest bedrooms and an addition to the original build.

That sequential room lineup lends the home “reflexivity,” Griffith says. “There are little moments where you can sit in one part of the house and see another part; it’s a wonderful experience, a way to truly appreciate the lines of the house.”

The couple, who are selling to be near their daughter in Colorado, treasure the outdoor living areas. “You hear silence, birds and wind rustling in the trees. That’s it,” Griffith says. “We start the morning with a cup of coffee on the north porch. When a storm gathers in the distance, it’s absolutely gorgeous.”

The home’s floors are polished concrete. Cabinetry and paneling are of white oak that warms the rooms––along with the living room’s vintage-style white Malm fireplace. The walls are painted an elegant neutral gray: Benjamin Moore’s Stone. The color, along with the oak surfaces, assists in absorbing the pervading Northern light.

Quartzite is used on working surfaces. The metamorphic rock covers a poolside cabinet station, which is plumbed and wired. It’s also used on a kitchen inset wall, on countertops and covers a black and white kitchen island. The couple, both retired geologists, favor the material for its durability, acid resistance and veining that’s similar to marble.

All kitchen appliances are by Miele except for two built-in Liebherr refrigerator-freezer units.

The primary suite has a corner wall window, opening the bedroom to the vast Hill Country’s northeast horizon. Both the primary and guest bath walls are finished in an elegant gray plaster.

A recent addition leads away from the guest bedrooms. A sitting area with an adjacent terrace is sided by a wet bar with a refrigerator, sink and icemaker. Stairs behind the bar descend to a 900-square-foot conditioned garage and storage. There’s also a two-car carport and additional surface parking.

A slatted wood divider is positioned behind the wet bar and stairs. It delineates a larger room, which the Griffiths call their music room. The room harbors a built-in ceiling projection screen and Sony projector, which convey with the home along with a quadratic residue diffuser that banks one wall. “I’m kind of a sound nerd,” explains Griffith, adding that other items in his cutting-edge sound system are available for separate purchase.

Exterior unfinished aluminum louvers cover some of the home’s light-drenched wall windows, helping to pare heat and maximize privacy while affording generous views. Over time, the metal will develop a grayish-white patina. The design is echoed in the pavilion and other areas, helping to establish a cohesive look.

There’s also a roof solar array, and Haiku ceiling fans are installed throughout the home.

Edging the main living areas, a cantilevered north-facing rear deck is fronted by a shallow tray holding crushed granite and limestone. Proceeding down steps, the backyard is lined with low limestone walls. “We brought it in ourselves––120 tons, my wife and I are pretty good on a Bobcat,” Griffith says. “It was a labor of love.” The area is anchored with a fire pit and chairs.

A 30,000-gallon rainwater catchment system screened by trees is located on the opposite side of the property.

“There’s limited water in this region––there’s the aquifer, which is somewhat stressed,” Griffith explains. “So, we get all of our household and pool water from the sky. It falls on the roof, goes through a series of pipes into a rainwater bank and then it’s pumped through a filtration system.” The system includes particulate and activated charcoal filters as well as ultraviolet (UV) light sterilization.

“It’s the best water I’ve ever tasted,” says Griffith. “We’ve never gone below one-third full in the tank, even during severe drought.”

Drilled in 2017, a 586-foot well is employed for landscape irrigation, and six hydrants are distributed throughout the property.

The well was one of numerous enhancements that the Griffiths added to the property. In 2014, the property’s original owner hired Webber to design the house and a builder to realize it but the structure was left incomplete. After purchasing the home in 2016, the Griffiths hired Webber and collaborated with his team to greatly refine and add to the residence. Webber also acted as the builder, finishing the home in early 2022.

The Griffiths’ home is 10 miles from both Dripping Springs and Bee Cave, the latter a larger town preferred by the couple for shopping excursions. Hamilton Pool is a few minutes’ drive away––“widely recognized as the greatest swimming hole on Earth,” Griffith says. A dramatic rock grotto beneath limestone outcroppings is set with a 50-foot waterfall.

The couple often entertains guests at a few dozen craft breweries and six wineries within 10 miles of their home. The area also excels in outdoor recreation: 2,427-acre Reimer’s Ranch Park is less than four miles away, and the 5,212-acre Pedernales Falls State Park is about 17 miles from the residence.