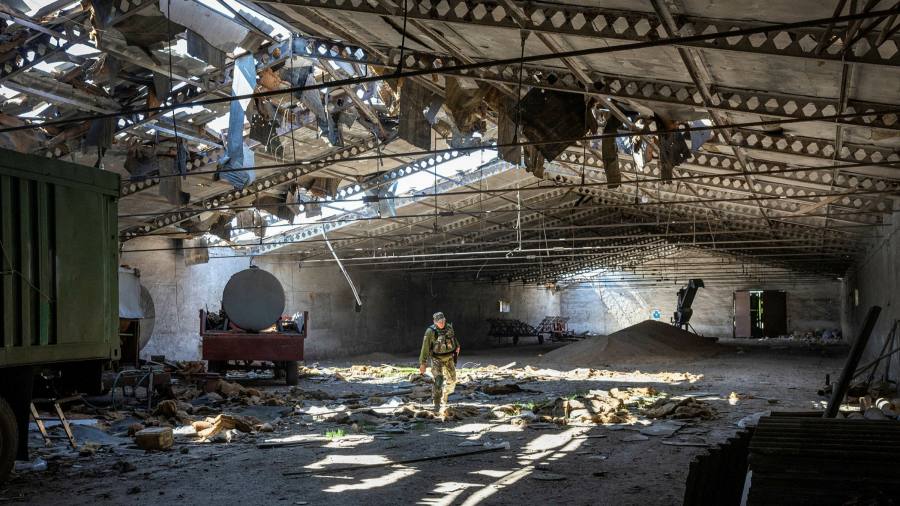 Hundreds of millions of people are at risk of “hunger and destitution” because of food shortages due to the Ukraine war, the chief of the UN warned, as talks stalled over ending Russia’s blockade of Black Sea grain shipments.

António Guterres spoke as negotiators from Russia and Turkey failed to break an impasse over how to get export food from Ukraine, one of the world’s biggest wheat exporters.

Talks have foundered over Moscow’s refusal to allow ships to leave Ukraine’s main port of Odesa and Kyiv’s fear of opening itself to more attacks, according to people familiar with the negotiations.

A deal to allow Ukrainian food exports was “essential for hundreds of millions of people in developing countries, including in sub-Saharan Africa”, Guterres said on Wednesday. The war “is threatening to unleash an unprecedented wave of hunger and destitution, leaving social and economic chaos in its wake”, he said.

People briefed on the UN-led negotiations, which involve Russia, Ukraine and Turkey, said they had failed to find ways to guarantee that grain can be shipped safely or that President Vladimir Putin’s forces will not mount an assault on Ukraine’s coastline. The sides have also not found a way to insure grain ships, they added.

The deadlock is preventing some 20mn tonnes of grain from reaching export markets such as Africa. Ukraine’s expected 50mn tonne harvest this year is also in danger as storage capacity runs low.

Russian foreign minister Sergei Lavrov said after talks in Turkey on Wednesday that Moscow was ready to offer guarantees “in some way or other” that it would “not take advantage of the situation” if Ukraine cleared a path to its ports. Ukraine has mined its Black Sea coast to protect Odesa, its main port city, and nearby regions from Russian assault.

But Kyiv wants more western weaponry to protect its coastline and export routes to be patrolled by a third-party navy, potentially Turkey’s.

“We need enough weapons to protect Odesa and this part of the Black Sea coast,” Ukraine’s foreign minister Dmytro Kuleba said in a briefing on Wednesday. “And we need a clear mission from countries we can trust to patrol this channel through which grain shipments will occur. In this respect, we can trust Turkey’s naval forces.”

An EU official said: “Everybody has lost trust in Putin. We are still trying to convince our friends in Kyiv to take into account what Russia is proposing as guarantees to build trust. But . . . the clock is ticking.”

Turkey, a Nato member that also has close ties to Moscow, believes it has both the military capacity and trust needed to act as an intermediary. It is offering vessels that can remove mines and warships to escort cargo ships, according to two people familiar with the matter.

Kyiv is willing to let Russia inspect grain ships to check they are not being used to supply arms to Ukraine, according to a person familiar with the matter, but has balked at Russian demands to be part of the naval escort.

Volodymyr Zelenskyy, Ukraine’s president, told the FT on Tuesday that Ukraine would not allow Russian ships to access its ports, saying he was trying to secure a “safe maritime corridor that can be used by all countries except the Russian Federation because we do not have any trust in Russia”.

Kyiv would not enter into any “arrangement” directly with Moscow to free up shipping, he added.

Instead, Ukraine wants more surface-to-ship missiles to push Russian warships farther back from the coast and limit Russia’s ability to mount an amphibious attack.

At the centre of the dispute is Odesa, the largest port still under Ukrainian control. Russia has pushed against using Odesa for grain shipments, two of the people aware of the state of talks said. Moscow likely fears that opening up the port could create an important economic and military lifeline for Kyiv, they added.

Instead, Putin has called to redirect maritime traffic through the Russian-held city of Mariupol, which was almost completely destroyed after a weeks-long siege, and nearby Berdyansk.

Russia has also refused to lift its blockade of the Black Sea unless the west relaxes sanctions against Moscow, including granting access to EU ports for its own grain. However the EU has said its port embargo exempts agricultural goods.

The UN-led talks have also failed to find a workable way to insure the grain shipments. If the humanitarian corridor is meant for grains to reach a poor country in dire need, a government or international organisation will need to arrange the insurance.

But if lifting the blockade means normal commercial transactions can resume, already expensive insurance premiums will be even higher, people familiar with the matter said.

Russia’s agriculture and fertiliser exports are not under sanctions but buyers in the Middle East and Africa have complained of difficulties accessing them due to restrictions on payments, shipping and insurance.