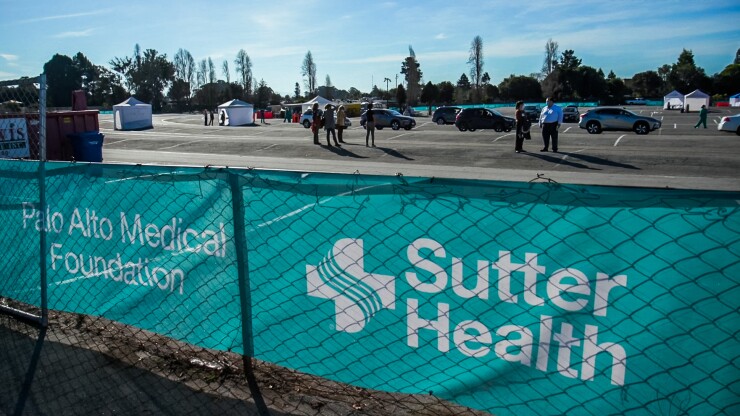 “The affirmation of the A1 rating and the revision of the outlook reflect our expectation that recent operating improvements will be sustained, and that current balance sheet and leverage measures will not materially weaken from current levels,” Moody’s analysts wrote in Tuesday’s report.

Sutter Health remains among the largest healthcare systems, on par with Kaiser Permanente and CommonSpirit, with $14 billion in revenues in 2021, according to Moody’s. It has 29 hospitals that serve 3 million, primarily in Northern and Central California.

Its powerful market position in California has brought Sutter Health into conflict with California authorities.

A federal judge granted final approval in August to a $575 million settlement between the health system and litigants that included the state attorney general.

The lawsuits alleged the health system engaged in anti-competitive practices including price gouging leading to higher healthcare costs for consumers in Northern California compared to other regions in the state. In addition to the cash settlement, the health system was also required to adopt reforms to restore competition, according to the attorney general’s office.

The agreements were for two lawsuits consolidated in December 2019, one brought by California’s then-Attorney General Xavier Becerra and another brought by a class of self-funded payers.

“Under the terms of the agreement Sutter’s transparency must increase, and practices that decrease the accessibility and affordability of healthcare must end,” Attorney General Rob Bonta said in a statement after the judge approved the settlement. “A competitive healthcare market is essential to ensure patients and families aren’t bearing the brunt of healthcare costs while one company dominates the market.”

The uncertainty wrought by the lawsuits, seismic upgrade costs and balance sheet weaknesses amplified by the COVID-19 pandemic resulted in ratings downgrades in 2021.

S&P dropped the rating to A from A-plus, assigning a stable outlook, in April 2021. Fitch downgraded it a notch to A in May 2021 revising the outlook to stable from negative. Moody’s had revised the outlook to negative during the same period, but didn’t lower the rating.

“The revision of the outlook to stable from negative reflects our expectation that recent operating improvements will be maintained, and that debt and balance sheet measures will not materially weaken from current levels,” Moody’s analysts wrote.