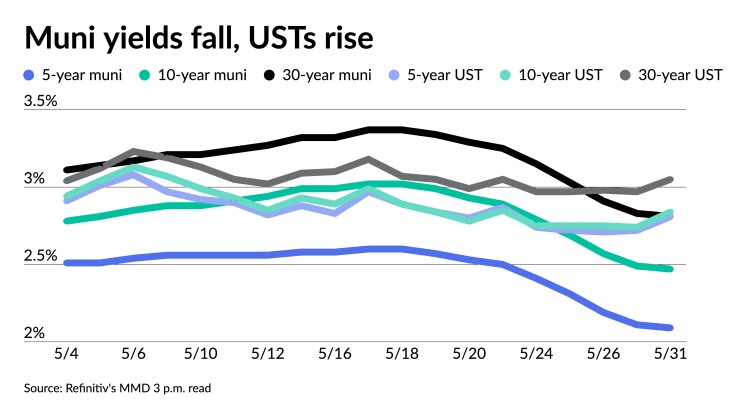 Municipals were slightly firmer in light trading Tuesday with the asset class ignoring a large selloff in U.S. Treasuries while equities ended the session with losses.

Kim Olsan, senior vice president at FHN Financial, said the municipal performance leading into month-end “has been nothing short of extraordinary.”

Olsan said despite a powerful rally into month-end, yield moves still have the 10-year spot of around 2.48% trading well above the last decade’s average of 1.79% for June.

The lows of 2020 and 2021 — less than 1% on the 10-year — “forced long-end commitments to reach reasonable taxable equivalent yields, but the current range has fair value at shorter points on the curve,” she said.

Recent demand has been partially stimulated “by the underperformance of munis relative to corporates,” which have “made tax-exempt yields compelling when compared to corporate bond after-tax yields,” said CreditSights strategists Pat Luby and John Ceffalio.

However, “last week’s strong outperformance of munis relative to corporates has erased most of the advantage that tax-exempt yields had offered, effectively closing the window of opportunity for corporate investors subject to the 21% federal tax rate to buy munis at yields higher than corporate bond after-tax yields,” they said.

Luby and Ceffalio expect the urgency of reinvesting this week’s maturing and called bond proceeds will continue to fuel market enthusiasm.

But, with banks and insurance companies now priced out of tax-exempts, they said, “that leaves the market once again dependent primarily on direct and indirect demand from individual investors.”

They noted June redemptions will be the highest of the year at $50.6 billion. Additionally, investors will also be receiving the largest monthly total interest payments of $14.2 billion, they said.

“The enormous wave of cash starts flowing on Wednesday when issuers will be paying out $37 billion of principal and interest,” Luby and Ceffalio said.

Compared to June, July and August redemptions, which will be $38 billion and $39 billion, respectively, may not look to be as significant but are still well above this year’s monthly average of $29 billion, they said.

The turn of the calendar into early June brings syndicate business that will struggle to approach the first round of called and matured bond volume, Olsan said.

While May’s total volume was down 9% year over year, coming in at about $32.2 billion, June’s average supply figure in the last 10 years is $40 billion, she notes.

“Near-term supply could be curtailed by taxable muni refundings that have moved out of the money for many outstanding issues,” Olsan said.

May’s smaller figures were led by a 70% drop in refunding volumes and a 31% drop in taxables.

Return figures for June show that the month has produced a near-flat result historically since 2012 but the start of upcoming month would appear on a better footing after the selloff of the last four months has been tempered, Olsan said.

“Although the market has recovered nearly 25% of the 2022 weakness, absolute yields still hold value levels over a wide timeframe,” she said, adding that muni to UST ratios are holding steady enough in the major spots.

Taxable equivalent yields on the short end are in the 3% area and intermediate yields offer TEYs over 4% (for a 21% bracket buyer and 50 to 75 basis points higher for a top-bracket individual), Olsan said.

Competitive:
The Iowa Board of Regents is set to sell $150.320 million of University of Iowa Hospitals and Clinics hospital revenue refunding bonds, Series S.U.I. 2022C, at 11 a.m. eastern Wednesday.

Munis firmer across the curve, outflows return
Pennsylvania Rep. Mike Kelly tapped as top tax writer on Ways and Means panel
Beyoncé, a $100,000-a-night suite and a red carpet of influencers: Dubai basks in its booming economy
Robots could surpass workers at Amazon by 2030, Cathie Wood says
Mortgage rates drop to the 5% range for the first time since September