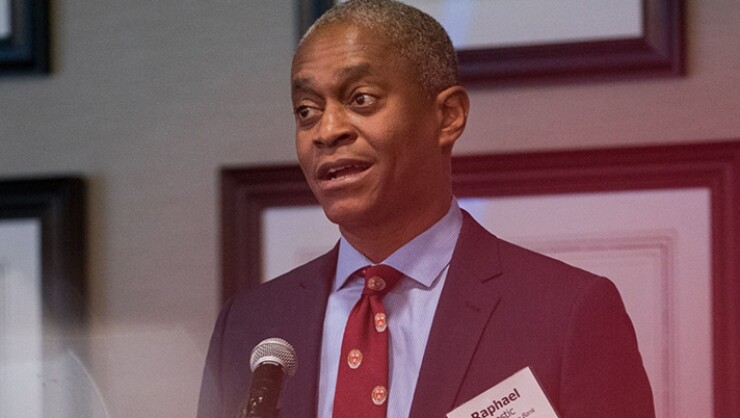 Federal Reserve Bank of Atlanta President Raphael Bostic said policy makers could potentially pause interest-rate increases in September after hiking by a half point at each of their next two meetings.

“I have got a baseline view where for me I think a pause in September might make sense,” Bostic told reporters Monday following a speech to the Rotary Club of Atlanta. “After we get through the summer and we think about where we are in terms of policy, I think a lot of it will depend on the on-the-ground dynamics that we are starting to see. My motto is observe and adapt.”

Bostic repeated that he supports Chair Jerome Powell’s plan to raise rates by a half point at the Federal Open Market Committee meetings in June and July, adding the caveat that an upside surprise on prices could call for more aggressive action. Inflation has been running close to a four-decade high and at rates more than triple the central bank’s 2% target.

“I’m at 50 basis points as long as the economy proceeds as I think it’s going to,” Bostic said. “If inflation starts moving in a different direction than it is right now, I’d have to be open to us moving more aggressively. I do want to make it clear that nothing is off the table. As we go through the months, we will see how it plays out.”

Bostic said he is forecasting inflation will likely be in the “high 3%” range at year’s end, with a lot of uncertainty around forecasts. He expects economic growth to be above trend for this year.

Recent financial-market moves, including a sharp decline in stocks last week, were consistent with the Fed’s goal for financial tightening, Bostic said. But there have been few signs in the real side of the economy that indicate slowing since the Fed commenced rate increases in March.

Bostic earlier told his Rotary Club luncheon audience that the Fed’s goal was a “soft landing” of bringing inflation down to 2% and slowing the labor market to a more normal functioning, adding it would require “dexterity” to achieve.

“It’s hard to know exactly how far or how hard we are going to push,” Bostic told reporters. “But I think getting us somewhere in the 2% to 2.5% range by year’s end would be a good place for us to get to.”