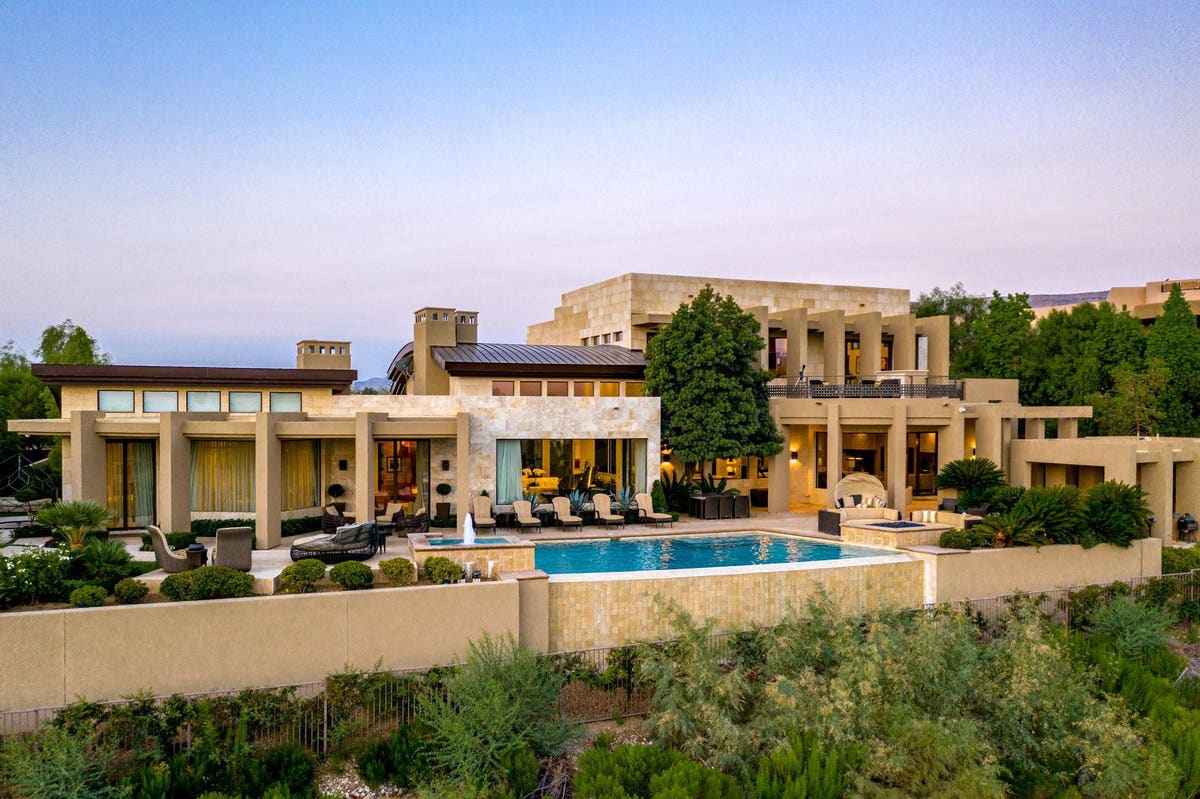 “It’s one of the nicest luxury communities in the city,” says listing agent Ivan Sher of The Ivan Sher Group. As for the neighborhood, he adds, “it’s heavily weighted toward primary residences.”

For those with an eye for architecture, the facade of this “timeless contemporary” for sale may evoke the Mayan-inspired designs of Lloyd Wright as exemplified in his landmark Sowden House in Los Angeles. While its buff-colored columns were patterned, this modern mansion uses massive colonnades protruding from stone-block walls to equally distinctive effect.

“In 10 or 20 years, it will still have that same timeless feel,” Sher says. “This is for somebody that has a sense of style and sophistication.”

Within the nearly 10,000 square feet of interiors are a vaulted-ceiling living room with a fireplace, a formal dining room, a wine room, a two-tier home theater, five bedrooms and eight bathrooms.

The kitchen features a breakfast bar, a double oven, dual refrigerators and a center island. Nearby, a semi-circular shaped wet bar has seating for four. The game room has a second wet bar. There’s also a guest casita and a four-car garage.

Despite the massive size, the home essentially offers single-story living, Sher notes. “Only the gym, a loft and the media room are on the second story.” Overall, the nearly three-quarters of an acre property is “very secure and private, with an enclosed courtyard.”

A vanishing edge pool and extensive outdoor living space sit off the back of the home, which takes in sweeping views of the fairways. An outdoor kitchen and bar, a firepit and a children’s yard complete the space.

Finding a home of this size and at this price point is no small feat in the local market, which has scant inventory – much of which is never listed publicly. “It’s all about the people you know and relationships,” says Sher, who has more than two decades in the real estate business and specializes in high-end and luxury properties. “A lot of what happens in Las Vegas is off-market.”

The Ivan Sher Group is an exclusive member of Forbes Global Properties, a consumer marketplace and membership network of elite brokerages selling the world’s most luxurious homes.

The Federal Reserve is likely to hike interest rates again. What that means for you
Metaverse Tokens Outperform Top Crypto Assets in 2023 With Decentraland’s MANA Leading the Pack
Nadhim Zahawi sacked as Tory party chair over his tax affairs
Millionaire Renters Have Tripled Since 2015
Stocks making the biggest moves after hours: Intel, Visa, Hasbro and more