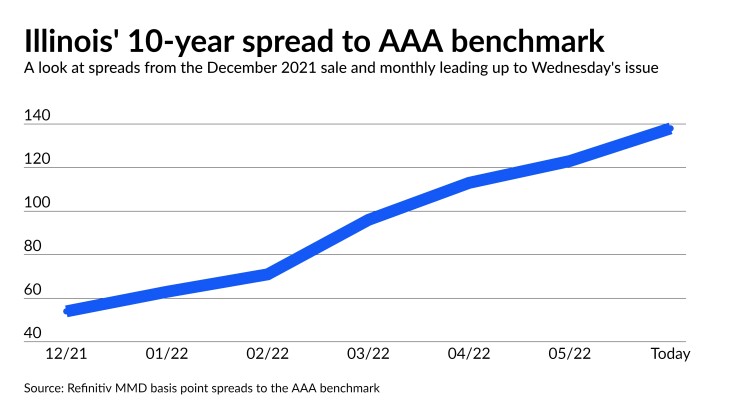 Illinois priced $1.64 billion of general obligation debt Wednesday at spreads on par with current trading levels that have more than doubled this year due to market turmoil despite a round of upgrades.

A U.S. Treasury market rally helped calm the market, but news of a 17th week of outflows from municipal bond mutual funds tamped down further improvement. The deal drew $5 billion of orders allowing the syndicate to shave several basis points off some maturities, according to the state.

“Overall it appears to have come with no surprises — not on the upside or the downside,” said Peter Franks, director of municipal analysis at Refinitiv MMD. “It looks to have come at current market levels with just slight concessions here and there. Everybody is seeing wider spreads.”

Spread widening has hit even high-grade credits, although Illinois’ numbers look more dramatic given the sharp narrowing it saw last year which spilled into early 2022.

The deal offered a series for $925 million of new money and $713 million of current refunding paper. The latter tranche was trimmed as rising rates cut into savings. The state last week had said it was aiming for a roughly $1.8 billion transaction.

“By state statute we must achieve a minimum of 3% present value savings, so we refunded as many bonds as possible that market conditions would allow,” according to Carol Knowles, spokeswoman for the Gov. J.B. Pritzker’s budget office.

Illinois confronted a vastly different market from the one it last entered late last year when it sold $400 million of GOs. The state then benefitted from a steady stream of mutual fund inflows and near record low interest rates, driving demand for any hint of extra yield which Illinois offers after several years with its ratings near junk.

Illinois’ 10-year maturity widened to a 138 basis-point spread to the Refinitiv MMD’s AAA curve on Wednesday, up from a 54 basis-point spread seen last December. Record outflows in recent weeks, weak liquidity, the war in Ukraine, rising inflation, and Federal Reserve actions to combat it have driven interest rates up and credit spreads wider.

The deal marked the state’s first primary outing with the benefit of a round of upgrades that put it at BBB-plus and Baa1.

The market situation has complicated pricings with flexibility needed on structuring options, such as coupons. Illinois offered 2037 and 2028 maturities at premium 5.25% coupons and the 2042 and 2047 maturities came with 5.5% coupons which are more popular in a higher interest rate environment for the additional current income and bigger kick to maturity they offer.

“The state of Illinois was very pleased to see such a strong reception from more than 90 different investors, including 30 new names, resulting in $5 billion of orders and 3 times oversubscription during one of the most turbulent markets in years,” the state’s Capital Markets Director Paul Chatalas said in a statement.

The true interest cost on the overall deal was 4.64% The new-money portion matures from 2023 through 2047 and will finance capital projects and ongoing pension buyouts while the refunding generated $21.9 million, or 3% of present value savings, according to the state.

The 2023 maturities in both tranches landed at a 2.81% yield with a 5% coupon after shaving nine basis points off from the initial pricing scale, which was in line with market appetite on the short end. The 10-year settled at a 4.40% yield with a 5% coupon and the 25-year at a 4.80% with a 5.5% coupon, both two basis points narrower from the initial pricing wire.

Illinois headed into the market with its 10-year trading at a 138 basis-point spread to the AAA and its 25-year bond at a 149 basis-point spread. The 10-year landed at the same level and the 25-year was one basis point off.

The state’s secondary trading spreads have steadily worsened this year after beginning 2022 with the 10- and 25-year at spreads of 63 and 66 basis points, respectively. The state’s 10-year was trading at the start of the year at a 1.67% yield, compared to 4.40% Wednesday.

The state has tapped tax revenue surpluses to put $1 billion into an empty rainy day fund, pay down bills, and supplement pension contributions.

The upgrades didn’t stop the widening, although some market participants said it might helped keep spreads from eroding further. The 10-year widened from 123 basis points at the start of May to 128 the week after the Fitch and S&P upgrades and further swelled to 138 basis points heading into Wednesday’s sale.

The state’s 10-year spread to the BBB benchmark at the start of the year was just eight basis points. It ballooned to 52 basis points this week, underscoring the impact along the curve.

CreditSights had put a “market outperform” label on the deal. “We find the current levels for Illinois attractive, especially when compared to other states and even local bonds,” read a report authored by John Ceffalio, senior market research analyst, and Patrick Luby, senior municipal strategist.

“Spreads could continue to push wider while mutual fund flows are negative and the large new-money sale could also push spreads wider” but “when the market stabilizes we expect that Illinois will begin to tighten and that the bonds will outperform other state GOs this year,” CreditSights said.

Secondary market liquidity is aided by the cross-section of institutional holders with Bloomberg data showing six asset managers with holdings of $1 billion or more and another dozen with $250 million.

“When the market is firm, this helps boost secondary market liquidity and tighten spreads,” Luby and Ceffalio said.

“While we encourage buyers to consider adding to state of Illinois positions, this is (and has always been) an income, not a performance, trade,” Municipal Market Analytics wrote in a recent outlook piece.