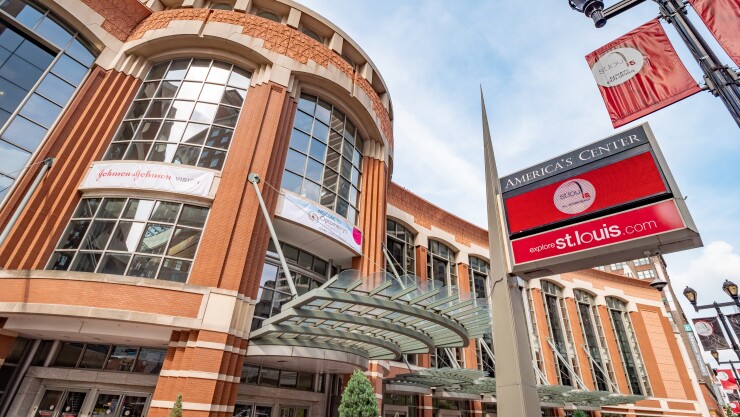 St. Louis County, Missouri, takes competitive bids Wednesday on $114 million of special obligation bonds that will provide its long-stalled share of public financing for the expansion and renovation of the downtown convention center.

The bonds mature from 2034 to 2047. Columbia Capital Management LLC is advising the county.

The bonds are rated AA rating by S&P Global Ratings based on the county’s appropriation pledge. S&P rates the county AA-plus.

“In analyzing the series 2022A bonds, we analyze the obligor’s involvement with the project, which we consider moderate, as the project involves renovations of a convention center, which we view as an auxiliary function of the county,” S&P said. “We assess the intended payment sources, which we consider to be strong, as the county intends to use receipts for its hotel/motel tax and sports and entertainment tax upon appropriation.”

“The industry is rebounding globally and today we are going to take a huge step for the next generation of business events in St. Louis,” said Kitty Ratcliffe, head of the Convention and Visitors Commission, which is leading the makeover of the convention center.

The financing plans received approval last month only after several county council members raised concerns about whether the county would be asked down the line put more in the financing pot after the sole construction bid for the first phase of the project came in more than $40 million over the estimated $80 million price tag. Earlier this month, officials disclosed that no initial bids were received for the second phase.

The city issued $105 million in late 2020 to cover its share of the public tab but the county’s financing had long been in a holding pattern.

Council Chair Rita Heard Days delayed a vote to pursue funding for a recreational center in the northern part of the county that had been built into the county’s support for the expansion and makeover. The council signed off on an additional $40 million of borrowing for the rec center.

Inflation, supply chain struggles, and the economic impacts from the Russian invasion of Ukraine have driven up prices and some county board members voiced concern that the convention center managers would eventually return for more public support.

Although the county can tap any available funds to repay the debt, it intends to use funds in a special trust fund that includes collections of a 3.5% hotel tax.

Voters approved the sports and recreation tax on hotels in 1990. Collections were primarily going to repay debt issued for The Dome at America’s Center, the former home of the National Football League’s Rams, which moved to Los Angeles in 2016. The dome’s debt is being retired this year.

The renovation and expansion of the Cervantes Convention Center that is part of America’s Center Convention Plaza Complex calls for new additions to space, expanding parking, ballroom improvements, and outdoor plaza renovations.

Local officials agreed to the public financing for the downtown convention center in 2019 before the COVID-19 pandemic struck and put a deep dent in tourism-related revenues. Officials have said with the Dome’s debt retired the funds are available to cover debt for the expansion project.

When originally completed four decades ago, the downtown convention center was the eighth-largest facility of its kind in the United States. Local authorities completed an expansion in 1993 and in 1995 built the Dome. The Convention and Visitors Commission operates the campus. Officials are aiming to complete the new expansion by 2023.