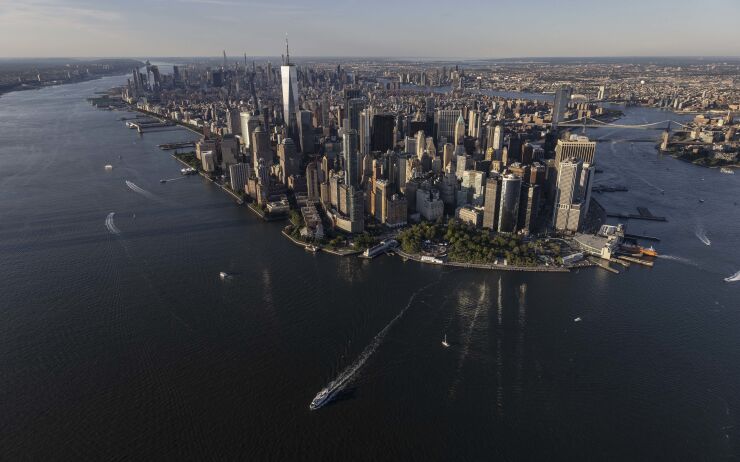 New York City got some good news just as it prepares to come to market with more than $1 billion of general obligation bonds next week.

Fitch Ratings revised the outlook on the city’s AA-minus rated GOs to positive from stable citing improved revenue performance as the city sees a recovery from the COVID-19 pandemic.

The rating agency also noted the improvement in budgeted reserve levels that would help mitigate against existing unknowns, such as geopolitical uncertainties and inflationary pressure.

“The city has a diverse revenue base and we were very impressed with the revenue that occurred in 2021 and 2022,” Kevin Dolan, director at Fitch, told The Bond Buyer. “While it might be difficult to repeat that performance in some categories in the next fiscal year, which begins July 1, we do feel there’s momentum.”

He said that the city may see some headwinds as it faces new labor negotiations with its unions, feels the sting from high inflation and sees rising geopolitical risks including Russia’s war on Ukraine.

Fitch also affirmed the city’s GO and issuer default ratings at AA-minus and affirmed the A-plus ratings on the NYC Health and Hospitals Corp.’s outstanding health system bonds and the Hudson Yards Infrastructure Corp.’s Fiscal 2017 Series A and Series B and Fiscal 2022 Series A revenue bonds.

PRAG and Acacia Financial Group are the co-municipal advisors while Norton Rose Fulbright and Bryant Rabbino are co-bond counsels.

The city also expects to sell $300 million of tax-exempt variable-rate demand bonds during the week of May 23, bringing the total amount of bonds issued by the city to $1.38 billion.

Proceeds will be used to fund various capital projects.

The GO bonds carry the city’s full faith and credit pledge and are supported by an unlimited levy by the city of ad valorem taxes on property. The city is not subject to the state’s 2% property tax cap.

City Comptroller Brad Lander said the rating action followed a meeting that his senior staff had with Fitch to discuss the city’s credit.

“Prudent fiscal management is key to ensuring a strong economy for New York City, especially through a time of unprecedented challenges,” Lander said in a statement emailed to The Bond Buyer. “NYC is in better-than-expected financial condition made possible through historic federal relief, as well as strong revenue collections.”

He said however that the work is not done and the city should use this opportunity to continue bolstering reserves.

Lander noted Fitch said that setting aside reserves above current levels and plausible structural solutions to out-year budget gaps as factors that could lead to them to upgrade the city’s credit rating.

“My office remains committed to critical oversight of both the city’s budget and economy to ensure an inclusive recovery and a sustainable future for all New Yorkers,” Lander said.

The city is also responsible for five separate pension systems, of which the police and fire are single-employer plans. As of January, the funds had $265.9 billion in assets under management and were the fourth largest public pension plan in the country. Lander is fiduciary for the systems.

“Although the other three are cost-sharing plans, the city bears the responsibility for the majority of the liabilities and virtually all for the two education-related plans,” Fitch said. “On a combined basis, the ratio of assets to liabilities is 96% on a reported basis as of fiscal 2021, or approximately 86% using Fitch’s 6% investment return assumption.”

Mayor Eric Adams presented his $99.7 billion executive budget for fiscal 2023 last month. The revised budget is up $1.2 billion from the $98.5 billion preliminary proposal unveiled in February and adds $200 million to the city’s rainy-day fund bringing reserves to $6.3 billion, the highest level in the city’s history.

Dolan said the mayor’s executive budget “was relatively conservative” and the projected growth in reserves was something the rating agency wanted to see.

The City Council is currently holding a series of public hearings on the fiscal 2023 budget. When these are concluded, the Council, the mayor and the Office of Management and Budget will sit down and negotiate final adjustments. By law, the 51-member council must vote on a balanced budget by July 1.

New York City is one of the biggest issuers of municipal bonds in the nation. As of the first quarter of fiscal 2022, the city had about $38.13 billion of general obligation bonds outstanding.

Fitch said factors that could lead to a rating upgrade include sustained revenue growth and resilience to the various economic headwinds and geopolitical risks; financial reserves at or above current levels when compared to spending and plausible structural solutions to out-year budget gaps; or improved expenditure flexibility as evidenced by manageable changes in fixed cost spending.

The agency said factors that could lead to a negative rating action or a downgrade include an increased gap between revenue and spending growth or a sustained erosion of the city’s reserve cushion or reduced ability to use budget management tools, such as the annual prepayment of expenditures.