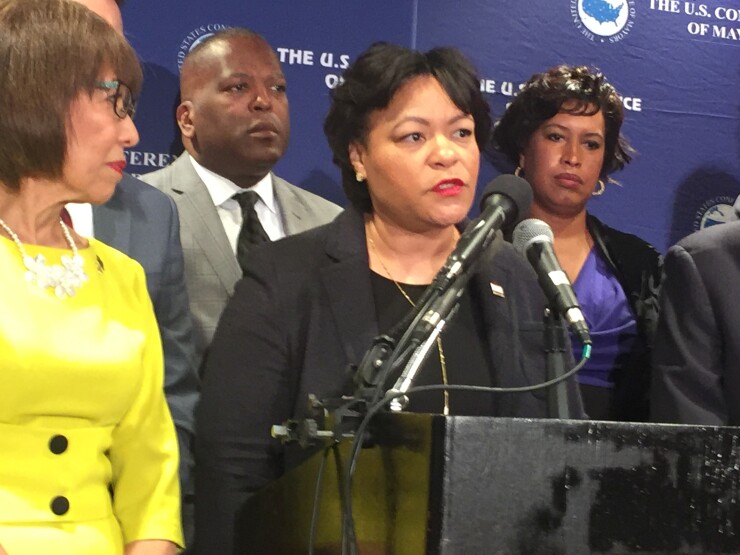 “We’re seeing an impact on RFPs that are being released,” the mayor said. “We may get no bidders or we get one bidder, or we find the cost of the project based on the bid has escalated or increased by double in some instances,” Cantrell said Monday during a National League of Cities’ press conference that was one of a series of events kicking off National Infrastructure Week.

NLC President Vince Williams said that with the enactment of the $1.2 trillion Infrastructure Investment and Jobs Act last year, this week marks “the very last infrastructure week, because we have won the battle and this is the time for us to applaud.”

The IIJA, also known as the Bipartisan Infrastructure Law, provides billions of dollars directly to local governments, marking a first for many federal programs.

But inflation poses a problem, Cantrell said, especially when coupled with the Great Resignation and supply chain disruptions.

“We’re having to take another look at projects, look at the design, how we may be able to leverage additional resources,” Cantrell said. “It is a reality, it’s something that we’re working through,” she said, adding that the Biden Administration “sees and understands” the issue.

Construction-put-in-place in January 2022 was 8.2% above the January 2021 estimate, according to Rider Levett Bucknall’s most recent quarterly construction cost report.

Some cities are looking to private money to help leverage the federal infrastructure dollars, said Vince Williams, mayor of Union City, Ga. and the NLC president.

“We’re having conversations as we speak for several opportunities for public-private partnerships,” said Williams. He named water lines and transit mobility as areas the city is exploring to “make sure we hone in on those opportunities that are going to give us the best bang for our buck.”

Cantrell named affordable housing and utilities as areas where P3s are being considered.

Private money and local agencies will need to be coupled with additional federal money to adequately address the country’s massive infrastructure needs over the next few decades, said Denver Airport CEO Phillip Washington, who spoke Monday at United for Infrastructure’s program for infrastructure week.

“When I look at the amount of work that’s needed in terms of infrastructure, and then I look at climate change … it ain’t enough,” said Washington, who recently founded a group aimed at doubling minority participation as prime contractors. “It’s not going to be enough over the next 20 to 30 years, so we have to be thinking about that three-legged funding and financing stool, which is the private sector, local initiatives and federal dollars.”

As local governments apply for IIJA funds, federal agencies need to make sure they have hired enough staff to keep up, said Miami Dade County Commissioner Eileen Higgins, who spoke at a separate panel.

The IIJA provision that pledges to expedite the environmental review process, also known as One Federal Decision, will be key, Higgins said.

“The stakes are high and we absolutely appreciate having another set of eyes as we go through the environmental process,” Higgins said. “We just have to make sure the federal government staffs itself up and makes sure it goes faster.”

The first ETF is 30 years old this week. It launched a revolution in low-cost investing
Murdoch scraps merger of Fox and News Corp after investor pushback
US and Germany to send main battle tanks to Ukraine
Connecticut’s fiscal 2023 revenue estimate gets a boost
Demand For Cold Plunge Pools Heats Up