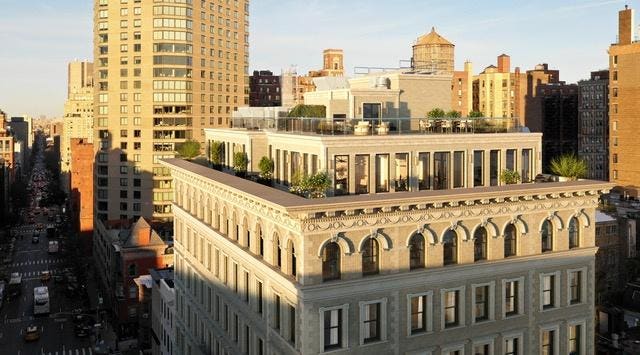 Atop a landmarked Beaux-Arts building dating to the turn of the 20th century in Manhattan’s Carnegie Hill, a pavilion rises above the roof, its clean lines and vast windows unabashedly announcing this as a brand new luxury penthouse.

The Wales Hotel was built in 1899 and operated as a hotel until recently, when it was converted to condominium use. Historic preservation consultant Bill Higgins, principal at Higgins Quasebarth & Partners LLC, advised the owners and developers during the building’s restoration and conversion.

“New York is a vertical city,” he says. “So, it is logical to build up when creating space.”

He points to the Hearst Tower in midtown as a famous example: in 2006 a Norman Foster-designed glass skyscraper was placed on top of the six-story 1928 masonry office building that housed the media conglomerate. Both the Wales Hotel and the Hearst Magazine Building were landmarked. Thus, the construction was regulated by the New York City Landmarks Preservation Commission.

“The Landmarks Commission is concerned with visibility: the term they use to govern these cases is ‘appropriate,’ by which they mean that we are to work with the character and the visibility of what was there,” Higgins says. “We knew that ‘appropriate’ meant that we should not overpower what was already there. The new needs to be harmonious with the old.”

A key part of placing the penthouse on the roof of the Wales was the restoration of its original cornice, a beautiful but fragile element at the top of the exterior walls that had been removed in the 1940s.

“We put back a new cornice that is very close to what had been there,” Higgins says. The design of the new cornice was guided by photos of the original, as well as surviving cornices on similar buildings. “It was an affirmative preservation measure: where the new building meets the historic part, the cornice covers the base of the new construction while it makes for a good transition.”

He explains that, structurally, not every building can bear the weight of a new building.

“However, in the late 19th century, steel frames began to be used in building construction. That’s what made skyscrapers possible and it made the Wales a good candidate for a rooftop penthouse.”

He points out that, since it was built when elevators were in use, the Wales always had structures on the roof. The new penthouse is sleeker than the cluster of utility buildings that were there, and far less obtrusive when viewed from the surrounding area.

The rooftop trend is gathering momentum. Earlier this month, New York billionaire Bill Ackman and wife, Neri Oxman, earned approval from the Landmarks Preservation Commission to build their penthouse in the sky despite years-long push back from their Upper West Side neighbors. Similar projects are located at 360 Central Park West and, in Tribeca, at the famous Cast Iron House.

Higgins has worked on a number of vertical expansions of historic buildings. He considers the Wales a successful project because it preserved the old building, brought back the cornice and created new space for modern use. The design of the penthouse, while clearly modern, is in harmony with the corner quoins, stone window surrounds, horizontal banding and masonry exterior of the historic Beaux-Arts building.

“We didn’t want to make a big design statement, but not to create a copy of what was already there,” Higgins says. “This is a simplified version.”