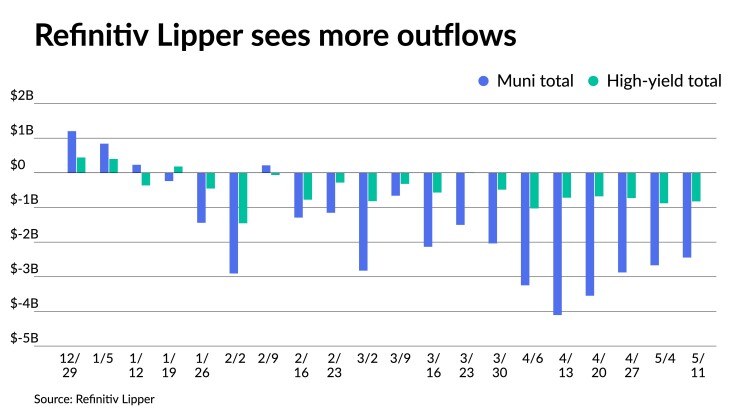 Municipals were mixed Thursday as the last of largest new-issues priced in the primary led by the Port Authority of New York and New Jersey, while U.S. Treasuries caught a risk-on trade and equities rebounded near the close after larger losses earlier in the session in another volatile day.

Triple-A benchmark yields rose up to three basis points, while UST yields fell across the curve.

Exchange-traded muni funds reported $1.600 billion of inflows after inflows of $618.167 million the previous week, while high-yield saw outflows to the tune of $824.578 million after $879.41 million of outflows the week prior.

The start of 2022 has been a “perfect storm” for the muni market, said Insight Investment strategists, Daniel Rabasco and Jeffrey Burger.

“The Federal Reserve’s ‘hawkish pivot,’ inflationary pressure and uncertainty driven by the Russian invasion of Ukraine contributed to uncertainty across all fixed-income assets,” they said.

The result, they said, “has been the heaviest net outflows since the onset of the pandemic in 2020,” and is “in stark contrast to a stream of almost continuous inflows over the year prior.”

They noted that “these types of sell-offs have been rare in muni history.” When they have happened, Insight Investment strategists said, “the market has consistently rebounded strongly, with inflows sharply rebounding.”

They expect a “potentially similar trajectory, particularly as technicals are set to reverse by the summer.”

From a supply perspective, “$39 billion of munis are scheduled to mature in June, followed by $35 billion in July and $36 billion in August,” they said, adding there should be $5 billion to $10 million of calls monthly.

From a valuation perspective, muni-UST ratios are increasingly attractive as they’re at their cheapest levels since March/April 2020, they noted.

“We believe that the perfect storm of municipal bond underperformance has delivered an excellent opportunity for investors to consider entering the asset class, particularly before supply materially falls over the summer,” they said.

Treasuries were better across the curve.

The four-week moving average narrowed to negative $2.885 billion from negative $3.300 from in the previous week.

“Despite the sharp moderation in April, the solid 11.0% increase from a year ago, suggests producer inflation will persist and will likely be passed along to consumers in the months ahead, thereby keeping consumer inflation elevated,” said Scott Anderson, chief economist at Bank of the West.

With food and energy costs still pushing prices higher, albeit less than in March, the core rate, which excludes those volatile factors, he said, “slowed to 8.8% year-on-year from 9.6% in March, a modest step in the right direction.”

Still, higher fuel and energy prices “are likely to exert further upward pressure on distribution and shipping costs while the effects of disruptions to production and supply chains related to Russia’s invasion of Ukraine and China’s lockdowns could further exacerbate price pressures,” said Mickey Levy, Berenberg Capital Markets’ chief economist for the U.S. Americas and Asia.

The jump from year-ago levels, he said, “points to continued increases in consumer prices as businesses adjust prices with a lag, although a critical consideration going forward is the degree to which businesses will maintain pricing power amid the current backdrop of four-decade high inflation, depressed consumer confidence, and squeezed real purchasing power.”

The markets still focus on the Federal Reserve rate hikes. Edward Moya, senior market analyst at OANDA, said, “persistent inflation, uncertainty with commodity prices impacted by the war in Ukraine, and China’s COVID situation are all short-term risks that could lead to aggressive tightening by the Fed later in the year.”

Indeed, neither CPI or PPI confirm “we passed the peak of the inflation mountain,” said Liz Young, head of investment strategy at SoFi. And until there is a clear decline in inflation that allows the Fed to “retract its claws,” she said, “volatility is likely to persist.”

Even with a drop in inflation, Young said, “it’s going to be sticky and uncomfortably high without a deeper pullback in demand.”

But Morgan Stanley’s key takeaway “was the big divergence in outcomes for key details that matter for the April PCE inflation data pointed to an increasingly stark divergence between CPI and PCE inflation.”

While airfares played a major role in CPI’s increase, they said, “PPI details pointed to a lower outcome for PCE inflation, where we expect airfares will only be up about 3% compared with a more than 18% increase in CPI airfares.”

And while inflation may have peaked, Scott Ruesterholz, a portfolio manager at Insight Investment, said, it will stay “well above target” through the year, finishing 2022 near 4%.

“This means that the Fed’s hiking cycle may already be priced in to a large extent, allowing diligent investors to find value opportunities,” he said. “Absent falling commodity prices, it will be incredibly challenging for the Fed to bring inflation close to its 2% target over the next year. Ultimately, we believe rate hikes alone will not be enough.”

Besides rate hikes, Ruesterholz said, “the Fed will need assists from fading fiscal stimulus, supply chain improvements, housing supply increases and slowing consumer demand. The good news is that many of these scenarios are starting to transpire.”