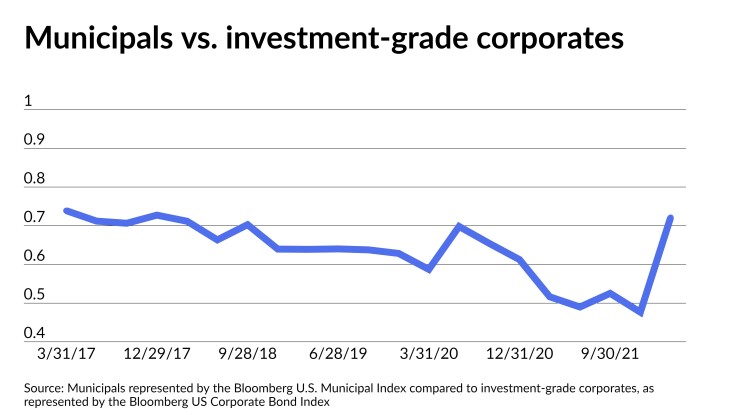 In our first-quarter municipal (muni) bond outlook, the twin risks of higher inflation and rising interest rates were a key focus.

We maintain now, as we did then, that these risks could also present opportunities in certain corners of the fixed-income market, especially among shorter-duration municipal bonds.

At the end of 2021 into the early days of 2022, consensus expectations were for the Federal Reserve to introduce three interest-rate hikes throughout this year. But in March, the Fed introduced the first of a planned series of seven increases for the year.

The Fed has increased the intensity of its rate-hiking plan to combat inflation, which has risen in the wake of the pandemic. For some time, inflation was largely viewed as transitory. However, it has become more entrenched in the economy over time. The Russia/Ukraine conflict, which began in late February, has only exacerbated the prospects for higher inflation in the near term.

Global geopolitical instability, rising rates and persistent inflation have combined to create a complicated market backdrop. In light of this, muni bond performance was somewhat disappointing over the first quarter. Municipal high yield, municipal bonds and taxable municipals returned -6.53%. -6.23% and -8.28%, respectively, during this period. This compares to U.S. corporate high yield, Treasuries and investment-grade corporates, which returned -4.84%, -5.58% and -7.69%, respectively.

During the first quarter, issuance was down 12% compared to the first quarter of 2021, based on lower refunding issues. The muni bond asset class experienced outflows of $21 billion, with AAA rates rising by more than 100 basis points over the quarter.

But, in spite of a difficult first quarter, we believe as firmly as ever that there remain opportunities among municipal bonds over the longer term.

Strong fundamentals surpass first-quarter faltering
Muni bond performance may have been weak in the first quarter, but fundamentals are strong. Munis have relatively strong credit quality compared with other fixed-income asset classes. In fact, the median rating of muni issuers is Aa3, compared to Baa3 for global corporates, according to Moody’s Investor Services.

And, during the quarter, several issuers received notable upgrades from credit-rating agencies. These include Illinois, New Jersey and Detroit general obligation credits.

Another key development during the first quarter was the end of Puerto Rico’s nearly five-year bankruptcy. This could present a compelling opportunity as we look ahead. The reduction of Puerto Rican debt from about $22 to $7 billion through a bond exchange should help to facilitate the island’s economic repair.

With this change, the Puerto Rican government can focus on growth and on putting to work billions of dollars in federal disaster funds, pandemic aid and hurricane insurance reimbursements. Investors who received cash payouts as a result of the debt exchange may be looking for a new place to reinvest. As a result, we’re sanguine about the lower-rated, high-yield municipal market.

The ratio of municipal bonds compared to U.S. Treasuries in terms of relative value is favorable as well.  The current ratio is about 105%, which is higher than we’ve seen in the past five years, when the average was about 93%, despite the notable anomaly of 2020.

Continuing to concentrate on shorter-duration
We remain cautious on duration. Inflationary pressures are likely to continue in the short term as pandemic-induced supply-chain issues shake out and, tragically, the war in Ukraine persists. Most likely the Fed will remain committed to tightening monetary policy to rein in inflation. This is still a point of volatility in the market. We suspect that shorter-dated and high-yield credit will be more likely to succeed in this type of environment.

With our favorable view of municipal fundamentals and our reticence on duration, we maintain that there’s a case to be made for ultra short and shorter-dated municipal strategies.

Biden administration rolls out a blueprint for a ‘renters bill of rights’ – Here’s what it includes
Top 10 bond counsel list sees some changes
NYSE says Tuesday’s trading glitch due to ‘manual error’
Stocks making the biggest moves midday: 3M, Paccar, Bed Bath & Beyond, AMD and more
92% of millennial homebuyers say inflation has impacted their purchase plans, but most are plowing ahead anyway, study shows