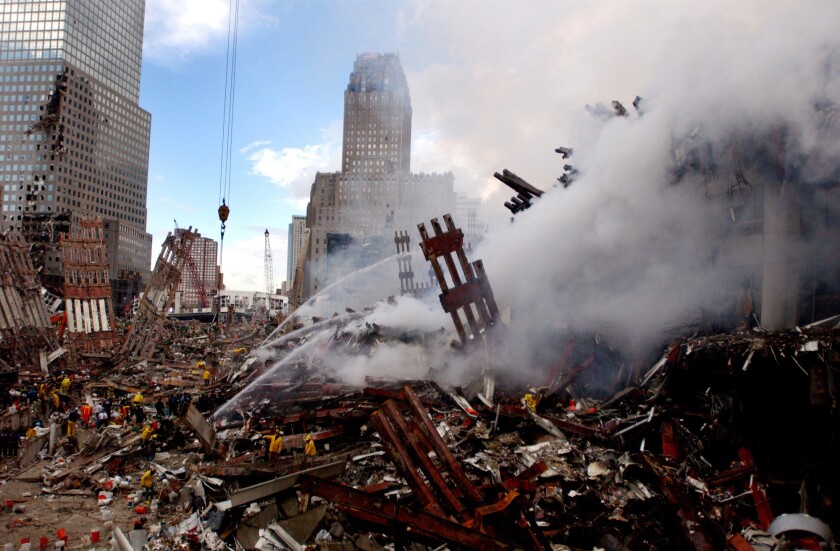 Visceral memories of the Sept. 11 terrorist attacks on the World Trade Center in New York City — and more positively, the response from the capital markets — linger 20 years later.

The anniversary comes as the city is trying to emerge from a newer crisis, the COVID-19 pandemic. Meanwhile, generational problems of crime, budget strife and inequality continue as the August withdrawal from Afghanistan underscores questions about the American military and foreign policy response to the attacks.

Andrew Rein, senior policy advisor to New York City schools Chancellor Harold Levy at the time and now president of the watchdog Citizens Budget Commission, voted early in Brooklyn on that Tuesday in a primary election ultimately postponed after the attacks. Rein chatted for a half-hour with City Council candidate Bill de Blasio in one of his longest conversations ever with the future mayor.

“Neither one of us, of course, knew what was going to happen,” Rein said.

Back at the former Department of Education headquarters at 110 Livingston Street, also in Brooklyn, he saw second plane hit the World Trade Center. “It was confusing for all of us, but we knew this wasn’t a fluke,” Rein said. He informed Levy what happened as the chancellor met with senior superintendents.

The attack on and destruction of the Twin Towers by terrorists in hijacked jetliners killed 2,753 people. Another 226 died that day when terrorists flew another plane into the Pentagon and when United Flight 93 crashed in rural Pennsylvania after passengers fought their attackers for control.

Howard Cure, now the director of municipal bond research for Evercore Wealth Management, was working at 115 Broadway as a director for bond insurer Financial Guaranty Insurance Co., and saw both planes strike the towers.

“We evacuated the building as soon as the second plane came in,” he said. The building, one of the closest to the trade center complex that was not severely damaged, was just south of Zuccotti Park, which became a staging area.

His daughter, 4-1/2 at the time, was attending pre-school at nearby Trinity Church. He got her out.

“The other children were being brought downstairs to what they called their jumping room in the basement, which ultimately filled up with smoke when the towers collapsed.”

Cure and his daughter took the No. 4 subway train from Wall Street to the Upper East Side, where they lived. “I probably should not have gotten on the subway knowing a terrorist attack was going on, but we got home before the towers collapsed,” he said. “It was one of the fastest subway rides I had ever taken.”

Kathryn Wylde, president of the business group Partnership for New York City, drove a young friend to her job at trading firm Cantor Fitzgerald, which occupied floors 100 through 105 of the trade center. The friend never returned.

Wylde learned of the attacks while at a meeting with Consolidated Edison chief executive Eugene McGrath at the utility’s Irving Place location. ConEd’s main operations center was under the trade center and McGrath heard the police reports real-time on radio.

“As I walked back to our building at 1 Battery Park Place, everything turned black,” Wylde said. “It was from the collapse of the first building.”

Her office never lost electricity or phone service. At 5 p.m., hers was one of the last cars to drive out of Manhattan. “The Army was there and three inches of white dust were on the ground,” she said.

“I was a young attorney living in Manhattan working at my law firm’s Stamford office.” he said Thursday at a dedication at Sherwood Island State Park on Long Island Sound, which offered a distant view of the towers. “I’ll never forget when I was pulled out of a meeting to find myself in utter shock and disbelief as my colleagues and I watched the second plane crash into the twin towers.”

New York came together on that horrific day.

“Three things stand out in my mind,” Rein said. “One was the amazing effort that the New York City Board of Education employees made to make sure that 1.1 million school kids got home safe. I think the last one was confirmed around 2 to 3 a.m. the next morning.

“People stayed on task. That was a wonderful experience and I remember seeing a principal from lower Manhattan who had walked across the bridge, come to 110 Livingston Street to report to the chancellor that her students were safe, and then broke down crying.”

Shortly thereafter, the state, city and even foreign governments collaborated on triage and recovery.

“The authoritative response to 9/11 by the public sector was particularly effective, and fast,” Wylde said. “Within a week, Scotland Yard was here helping us how to deal with terrorism.”

The markets, already grappling with the dot.com recession, also kicked into gear with municipal bonds playing a key role.

Washington delivered with a $20.5 billion aid package for the city that included $8 billion in so-called Liberty Bonds, which the federal government authorized to encourage commercial and residential development in lower Manhattan through triple-tax-exempt, private-activity bonds.

“It was really the first time you really had a federally geographically targeted tax program to respond to a disaster,” Cure said. It also enabled agencies such as the state-run Metropolitan Transportation Authority, which operates the city’s subway system, and the city’s Water Finance Authority and Health & Hospitals Corp. to reissue debt.

Two days after the attacks, the state legislature authorized the New York City Transitional Finance Authority to issue an additional $2.5 billion of bonds and notes — so-called recovery bonds and notes — to fund the city’s costs related to the events.

The state established the TFA in 1997, when the city was bumping up against its general obligation debt limits, which were based on its property tax base. Proceeds helped the city meet immediate cash-flow needs for cleanup and recovery efforts, with expected federal and state aid securing them in part.

“The state, almost immediately, allowed the TFA to issue debt for the short-term operating needs to cover the expenses of the 9/11 tragedy, because they were, in the past, restricted just to capital needs,” Cure said. “So you had that, plus they also increased the amount that could be issued under the TFA.”

The city also raised property taxes by 18% to boost its coffers.

In August the New York Liberty Development Corp., which provides loans and grants to businesses within the state, issued $1.22 billion of revenue refunding green bonds for its 4 World Trade Center project. Fitch Ratings and S&P Global Ratings assigned A-minus and A ratings, respectively.

Underwriters repriced and lowered some of the early serial bonds. Goldman Sachs was bookrunner.

The city has a history of recovering from disasters, some unexpected, some not. They range from weather disasters — including the recent remnants of Hurricane Ida — to the near-brush with bankruptcy in the mid-1970s.

“I think the city had a big reckoning in the mid-1970s with its financial crisis and now there’s greater vigilance on fiscal planning,” said Natalie Cohen, president of National Municipal News and a longtime municipal bond analyst.

“Nationally, we’re going through bunch of major interchanges — Federal Reserve policy, technology and growing inequality. The aftermath of the George Floyd death showed up in the recent mayoral primarily with the varying viewpoints you saw.”

Rein, citing the city’s history of coping with disasters, differentiated between the expected and the unexpected.

“Let’s think about the last 50 years. We look at the 1970s: political upheaval, social upheaval, the decline of manufacturing, Rust Belt cities to Sun Belt cities. Obviously compounding that is, of course, as we saw, mismanagement of New York City government, questions about how we managed our social service sector.

“The recovery from the 1970s took a long time because there were those underlying trends. But New York did come back and we can think through the 90s as a more governable, livable city.”

A recession and a “localized disaster” were the dynamics in 2001.

“Think about New York coming together after 9/11 within New York, and with New York city, state, the federal government. Think about those forces and the speed of the response and the cohesion of that recovery. Things like encouraging residential influx to downtown, right at the heart of where the attack was.”

Such unity is absent today by contrast, according to Rein.

“Politics are divisive within the city. We can see the land-use decisions and the push and pull. We have national political divisiveness, the impact of 40 years of income inequality growing, and housing inaffordability in this city becomes more and more challenging.”

Joseph Krist, publisher of Muni Credit News, detects “a sense of almost doom” regarding prospects for the economy.

“In 2001, there seemed to be more of a spirit of putting effort into restoration,” Krist said. “Now, the various interests look like they are almost trying to game the politics of the recovery from the pandemic for their own parochial ends. It’s like the whole recovery is about doing what 25- to 40-year-old bike riders want.”

He added: “There was also more of a community spirit in 2001. Now, all we hear about is how different groups are impacted differently. It makes the recovery more complicated.

“Now, the pandemic has only heightened differences.”