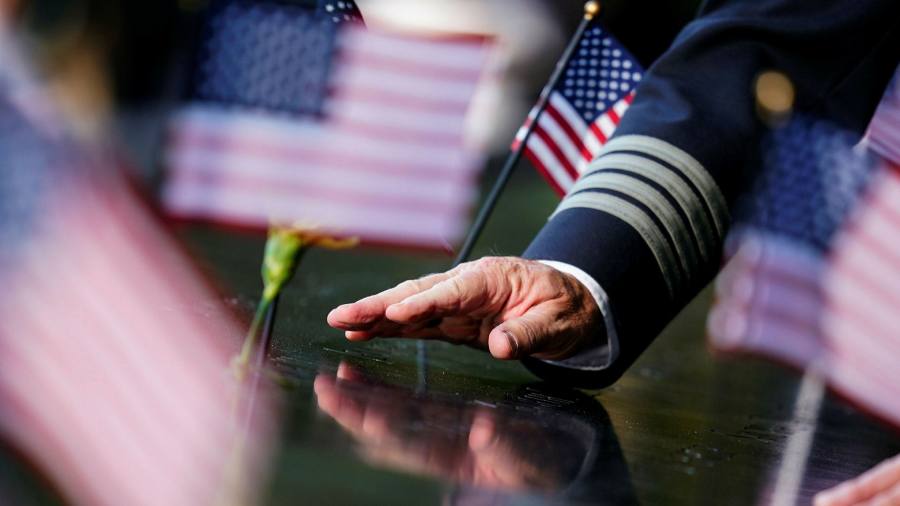 US president Joe Biden is to commemorate the 20th anniversary of the September 11 attacks on Saturday by visiting all three US sites that were targeted by al-Qaeda.

Biden called on Americans to mark a moment of silence beginning at 8.46am, the time the first of four hijacked planes ploughed into the North Tower of the World Trade Center in New York.

The attacks were “one of the most unconscionable tragedies in our country’s history”, he said on Friday, one that “tore a hole in the heart of our nation”.

Nearly 3,000 people were killed in the 2001 attacks on New York’s Twin Towers, the Pentagon in Virginia and a fourth flight downed in Pennsylvania after passengers overwhelmed the hijackers.

Former presidents George W Bush, leader at the time of the attacks, Barack Obama and Donald Trump were also set to mark the anniversary.

Families of the victims at the National September 11 Memorial and Museum next to where the Twin Towers fell were due to read out the names of their deceased loved ones in a ceremony starting at 8.30am, which would be marked by six moments of silence.

Events planned across the country include an annual “Waves of Flags” commemoration on a Malibu hillside in which 2,977 US flags will be flown to remember every life lost in the attacks. Family members of the victims were expected to gather at all three sites.

More than 2,400 US personnel were killed in the wars that followed the attacks, which were conducted by al-Qaeda jihadis and planned from Afghanistan, and 20,000 wounded. The fatalities include 13 from the US withdrawal from Afghanistan last month. Eighteen US veterans die by suicide every day, Biden said last month.

Karestan Koenen, a Harvard professor of psychiatric epidemiology who witnessed the planes fly into the World Trade Center and subsequently escorted grief counselling visits to what became known as Ground Zero, said the trauma had left an indelible mark on the nation.

“It’s never closed,” she said. Koenen cited a “collective need” to remember the attacks, which had led to the burgeoning study of post-traumatic stress disorder affecting both veterans and civilians.

Antony Blinken, secretary of state, on Friday described this year’s commemoration as an “especially emotional” anniversary for veterans of the war, an oblique reference to the fall of Kabul to the Taliban last month in the wake of the US withdrawal from Afghanistan.

Washington deposed the Taliban following the 2001 US invasion of Afghanistan. On Saturday, the same ultraconservative Islamist militancy that has ties to al-Qaeda inaugurated a new government.

Biden has attempted to place this year’s commemoration in the context of the US drawing a line under its response to the attacks — one that has shaped America’s role in the world over the past 20 years.

“As we turn the page on the foreign policy that has guided our nation the last two decades, we’ve got to learn from our mistakes,” Biden said last month, following the completion of the US drawdown from Afghanistan that ended America’s longest running war.

Biden has argued that withdrawal marks the end of an era of big military operations intended to remake other countries, and the beginning of a new one focused on competition with China and more pressing issues at home.

Richard Fontaine, chief executive of bipartisan think-tank Center for a New American Security, said the US had pulled off “huge successes” in its response to September 11, including preventing another mass-casualty attack on the homeland. But he also highlighted cases of “terrible overreaches”, including the harsh treatment of detainees and the war in Iraq.

“The whole thing was over 102 minutes later but . . . what we remember is the fear, the chaos, the confusion and the trauma of that day,” said Garrett Graff, author of an oral history of the September 11 attacks.

“The fact that we reacted so emotionally to that day, and chose to let ourselves be driven by that fear, is key to understanding sort of everything that the US got wrong,” he said, referring to Washington’s global war on terror that followed, which included military interventions in Afghanistan and Iraq, the CIA’s resort to black sites and torture, and the Guantánamo Bay detention camp, all of which harmed US global standing and polarised opinion at home.

Biden has promised to declassify parts of the FBI investigation into the attacks over the next six months, acceding to demands from family members of victims who want Saudi Arabia’s alleged role revealed.

In a video address to mark the anniversary, Lloyd Austin, secretary of defence, a veteran of the wars in Afghanistan and Iraq, paid tribute to the lives lost, and invoked US democracy and the constitution as guiding core principles.

“America will always lead,” he said.