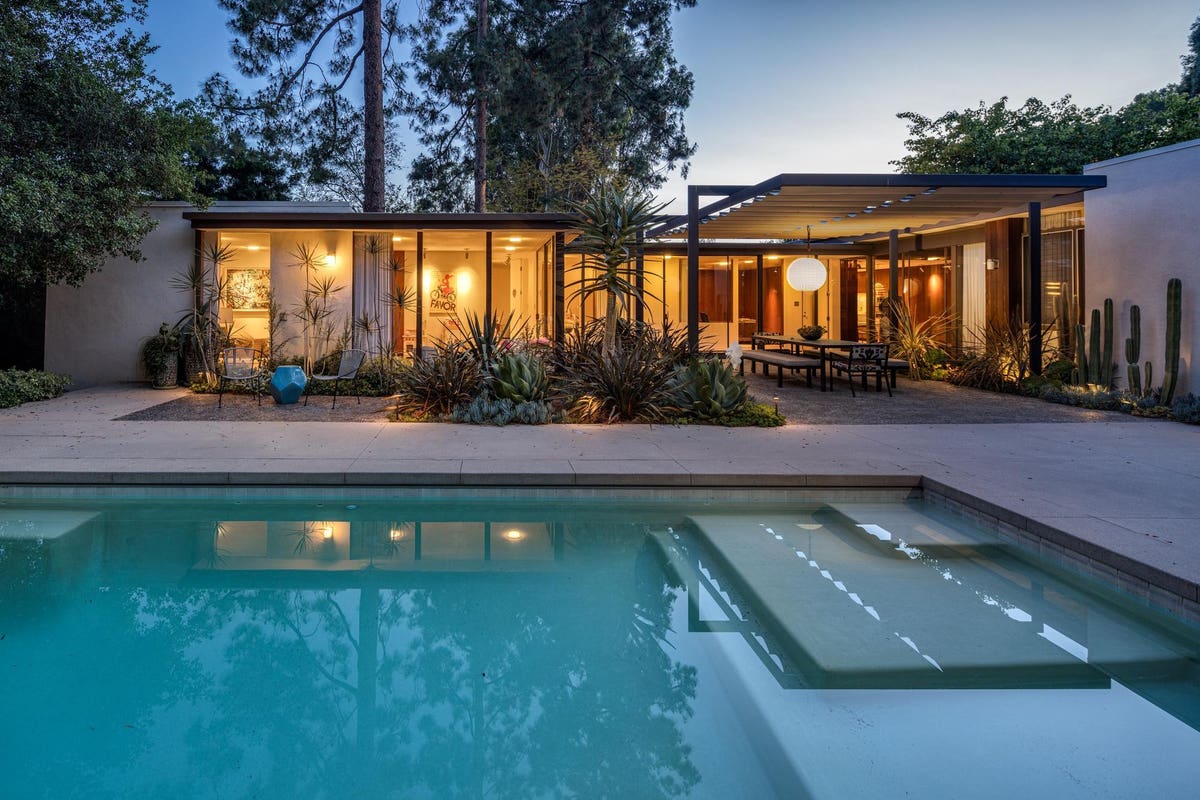 When it comes to Southern California luxury homes, the Ellen DeGeneres touch is akin to that of the mythological King Midas. Except instead of gold, every house the longtime talk-show host and her wife Portia De Rossi touch turns into a gem.

The serial home-flippers’ latest real estate purchase, however, is already a jewel in its own right. The Midcentury Modern showplace known as the Rowan Residence sits in Beverly Hills’ gated Hidden Valley Estates. The Robert Skinner-designed house was listed with Brett Lawyer of Hilton & Hyland at $9.35 million, but the duo picked it up for $8.5 million at the end of August.

Skinner unwittingly cemented the house’s place in Modernist history books by commissioning architectural photographer Julius Shulman to shoot the property soon after construction was completed in 1961. The home is immortalized in “Julius Shulman: Modernism Rediscovered.”

Shulman’s photographs informed the recent two-year restoration of the house by architect John Bertram, known for his work refurbishing the Modernist homes of Richard Neutra, and designer Sarah Shetter.

Particular attention was paid to the kitchen, the office, the bathrooms and the primary suite. The sophisticated end-product integrates Douglas fir cabinetry, terrazzo flooring, marble countertops and museum-quality lighting. Tongue-and-groove redwood siding was used inside and out.

Appearing low-slung from the street, the house is entered through a courtyard. A garden of succulents and drought-tolerant plantings give way to a central tree surrounded by dark stone.

Walls of glass set the stage for the open-concept indoor/outdoor living and entertaining spaces.

A glass-sided hallway leads to a window-wrapped sunken living room. The original brick fireplace anchors one corner of the high-ceiling room, which is surrounded by a balcony.

Steps connect the living room to the open dining area. Beyond that is a modernized kitchen with a center island and a long skylight above.

Another floor-to-ceiling window brings light into the wood-walled office.

The bonus room is currently outfitted as a playroom.

Expanded since it was originally built, the Rowan Residence has five bedrooms and six bathrooms within more than 4,600 square feet of living space.

Dining patios, a swimming pool with a built-in lounging area and bar, mature trees and lush greenery complete the grounds.

So what will the celebrity owners leave and what will they change? We wouldn’t be surprised to see some splashes of bright colors in the décor, but perhaps this time they’ll just unpack and enjoy some peace and quiet.

Hilton & Hyland is a founding member of Forbes Global Properties, a consumer marketplace and membership network of elite brokerages selling the world’s most luxurious homes.

Homebuilder sentiment rises in January for the first time in a year, thanks to lower mortgage rates
Top 10 bond counsel list sees some changes
Biden administration rolls out a blueprint for a ‘renters bill of rights’ – Here’s what it includes
Inclusive Capital takes a stake in Bayer — 3 ways it may build value with a sustainable focus
Germany defies allies’ pressure to send tanks to Ukraine