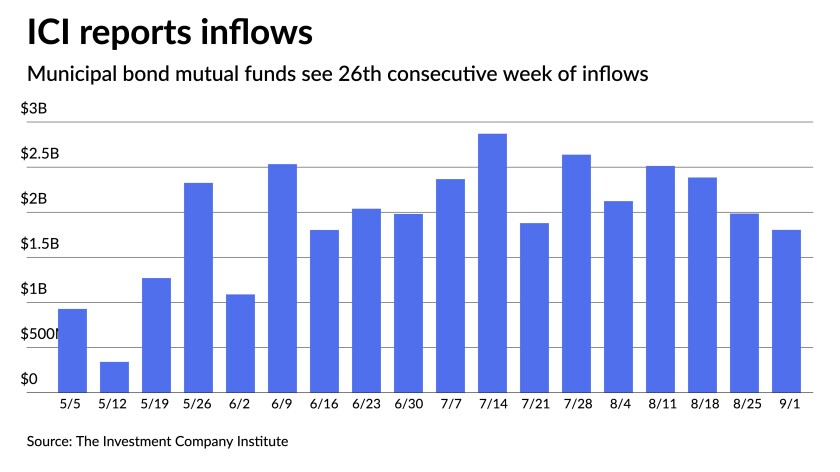 Municipal benchmark yield curves were little changed amid light trading and few deals pricing, but the market had a stronger tone Wednesday amid an improved U.S. Treasury market and equity losses on coronavirus fears.

For the 26th week in a row, municipal bond mutual funds saw inflows of nearly $2 billion, bringing the total to $71 billion year-to-date.

Exchange-traded funds saw $251 million of inflows after $378 million a week prior.

“Seasonally, the flows dropped a little bit last week so it will be interesting to see the post-Labor Day flows and how those look this week,” a New York money manager said. “There is still a fair amount of cash sitting around. But people seem to be a little picky about what they want to get involved with.”

Large new issues from Minnesota in the competitive space Thursday should help direct benchmark yields. A taxable corporate CUSIP healthcare deal out of Georgia joins the growing list of corporate CUSIP deals getting done in the muni space.

Some traders were already looking to the following week. Thirty-day visible supply ticked up to $10.35 billion as more larger well-known names add themselves to the calendar including several New York names and a $2 billion-plus California deal slated for next week.

A $633 million New York City Municipal Water Authority deal pricing for retail on Monday and institutions on Tuesday should pique a lot of market demand, according to the manager.

Secondary trading and scales
The secondary was fairly quiet with little more than $4 billion traded near the close.

Job openings at record high; Fed may consider taper
The number of job openings in July increased 749,000 to a record high of 10.9 million, the Labor Department reported Wednesday.

The rate of jobs openings rose to 6.9% in July, also a new high, Labor said in its job openings and labor turnover summary (JOLTS) report.

Hires and total separations were little changed at 6.7 million and 5.8 million, respectively. Within separations, Labor said the quits rate was flat at 2.7% while the layoffs and discharges rate was nearly unchanged at 1.0%.

Job openings increased in several industries, with the biggest increases in health care and social assistance, in finance and insurance, and in accommodation and food services. The number of job openings rose in all four regions of the U.S.

In July, hires dropped by 277,000 in retail trade, fell by 41,000 in durable goods manufacturing and declined 23,000 in educational services. However, the number of hires increased in state and local government education and in the federal government.

In the 12 months ending in July, hires totaled 72.6 million while separations were 65.6 million, a net gain of 7.0 million jobs.

“Assuming the economy continues to improve as I anticipate, it could be appropriate to start reducing the pace of asset purchases this year,” he said. “I will be carefully assessing the incoming data on the labor market and what it means for the economic outlook, as well as assessing risks such as the effects of the Delta variant.”

Even after the asset purchases end, “the stance of monetary policy will continue to support a strong and full economic recovery and sustained attainment of 2% average inflation,” he said.

“In particular, the FOMC has indicated that it will continue to hold the target range for the federal funds rate at its current level until the economy reaches conditions consistent with its assessments of maximum employment, and inflation has reached 2% and is on track to moderately exceed 2% for some time,” he said. “There is still a long way to go before reaching maximum employment, and over time it should become clearer whether we have reached 2% inflation on a sustainable basis.”

Williams noted that the U.S. economy was continuing to grow at a strong rate.

“The reopening of the economy means more jobs, more demand for products, and good momentum toward a full recovery,” he said. “But, even with the strong pace of growth we are seeing, a full recovery from the pandemic will take quite some time to complete.”

Williams said job gains have been strong in recent months, particularly in sectors that were especially hit hard during the COVID-19 pandemic, such as leisure and hospitality.

However, he said “I cannot stress enough that we still have a long way to go to get back to our maximum employment goal. For example, there are still over 5 million fewer jobs today than before the pandemic and the unemployment rate (at 5.2% in August) is still far above the levels reached early last year.”

Williams noted that in typical recessions, the challenge is that there aren’t enough jobs for those who want them.

“In today’s job market, demand for labor is very high — we hear that from employers who are finding it hard to fill all their openings — and a lot of people are getting hired,” he said. “At the same time, people are leaving their jobs in large numbers, either to look for new work or exit the labor force altogether.”

He noted the cycle of hires and quits reflects the nature of the coronavirus pandemic as workers and employers have to quickly adapt to changing situations.

“These vacancies won’t be filled instantly — it takes time for employers to find the right workers,” Williams said. “But as demand for workers and progress on hiring remains strong, I am confident that we will continue to see meaningful job gains and continued progress toward maximum employment.”

Meanwhile, the Federal Reserve said Wednesday in its Beige Book report that U.S. economic growth slipped slightly to a more moderate pace in the period between early July and the end of August.

“The stronger sectors of the economy of late included manufacturing, transportation, nonfinancial services, and residential real estate. The deceleration in economic activity was largely attributable to a pullback in dining out, travel, and tourism in most districts, reflecting safety concerns due to the rise of the Delta variant, and, in a few cases, international travel restrictions,” the Fed said. “The other sectors of the economy where growth slowed or activity declined were those constrained by supply disruptions and labor shortages, as opposed to softening demand.”

The Fed noted all districts continued to see rising employment, though the pace of job creation ranged from slight to strong.

“Demand for workers continued to strengthen, but all districts noted extensive labor shortages that were constraining employment and, in many cases, impeding business activity,” the report said. “Contributing to these shortages were increased turnover, early retirements (especially in health care), childcare needs, challenges in negotiating job offers, and enhanced unemployment benefits.”

Some districts said return-to-work schedules were pushed back due to the Delta variant’s increase.

“With persistent and extensive labor shortages, a number of Districts reported an acceleration in wages, and most characterized wage growth as strong — including all of the midwestern and western regions. Several Districts noted particularly brisk wage gains among lower-wage workers. Employers were reported to be using more frequent raises, bonuses, training, and flexible work arrangements to attract and retain workers.”

The Fed said that inflation was steady but at an elevated pace, with half of the districts saying the pace of price increases was strong and half calling it moderate.

“With pervasive resource shortages, input price pressures continued to be widespread,” the Fed said. “Some districts reported that businesses are finding it easier to pass along more cost increases through higher prices. Several districts indicated that businesses anticipate significant hikes in their selling prices in the months ahead.”

The Dublin Unified School District, California, is set to sell $116 million of general obligation bonds at 12:30 p.m. eastern on Thursday.