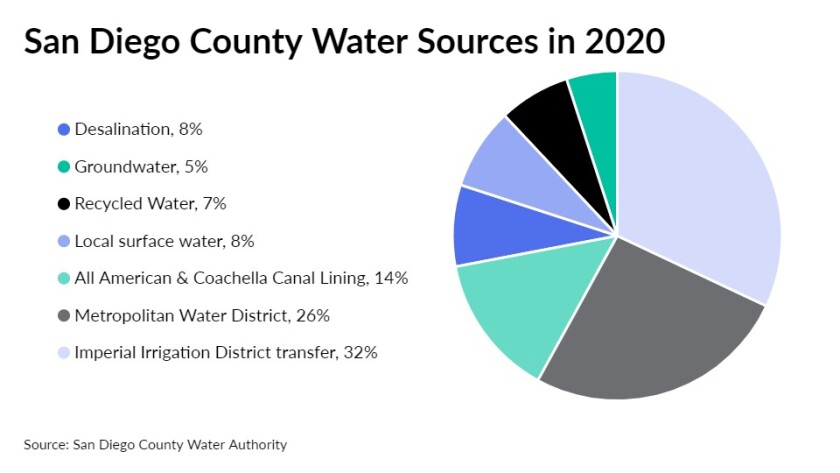 As California coastal cities look for methods to avert the harsh realities of the state’s second drought in a decade, desalination has returned as a hot topic.

In San Diego County, the drought makes the argument that the controversial choice to build a coastside desalination plant was correct.

The Claude “Bud” Lewis Carlsbad Desalination Plant opened in Carlsbad in 2015. It supplies water to the San Diego County Water Authority, a wholesale agency that supplies about three-quarters of the water used within its 3.3 million population service area for 24 member agencies.

The reverse-osmosis plant supplies about 50 million gallons of water daily and was created through a public-private partnership between the authority and Poseidon, a private desalination development company.

The 500-page agreement shifted the majority of the risk for the project on to the private enterprise, said Lisa Marie Harris, the authority’s finance director and treasurer.

“It lays out if something went wrong,” Harris said. “If the plant ever did not produce water, we were not required to pay for the water or the debt structure. It was an arms-length distance from any challenges.”

The deal was struck under the leadership of former general manager Maureen Stapleton “and she wanted to minimize the risk as much as possible,” Harris said. She wasn’t with the agency then, but Harris said she would have done it in the same way.

“We were the first desalination plant of this size in the Western hemisphere,” Harris said.

“There was risk for completion and the production of water,” Harris said. “It was issued through a conduit. So, the actual cost of the transaction was not on the balance sheet of the water authority.

“It’s a risk transfer – and you pay for that risk transfer,” Harris said. “It has served the water authority well.”

Desalination is considered a highly capital-intensive and environmentally controversial response to the state’s water problems.

If you think of the different ways of gaining water to provide consumers similar to a financial portfolio, you have different sources of water with different levels of reliability at different costs, Hanak said.

Desalination “has a high level of reliability,” she said. “It’s a low return financially, but its reliable. While some other sources are cheaper, but less reliable. Urban suppliers have to juggle that against the need for water to come out of the tap.”

Bonds for the Carlsbad project were issued in 2012 by the California Pollution Control Authority, a conduit issuer under the auspices of the State Treasurer’s Office, for Poseidon Resources. The CPCFA issued $530.3 million of private activity bonds on behalf of Poseidon to build the plant and $203 million in tax-exempt governmental bonds on behalf of the water authority for the 10-mile pipeline. CPCFA won the Bond Buyer’s Far West regional Deal of the Year award in 2013.

Originally assigned the lowest investment-grade rating of BBB-minus, Fitch Ratings upgraded the debt to BBB from Fitch Ratings in October 2019 ahead of plans to privately place a $45 million note to finance construction of a new intake system.

Moody’s affirmed its Baa3 rating ahead of that deal. Both rating agencies assign stable outlooks.

The ratings are in the triple-B level because the deal because it’s a P3 and not on the balance sheet of the double-A to triple-A water authority, Harris said.

Outstanding pipeline bonds, which were issued with a five-year call provision, were refunded in a $183.2 million deal in February 2019.

California has 2,900 community water systems, and about 400 of those are urban suppliers, Hanak said.

Reverse osmosis or desalination actually has applications for cities to not just remove salt from ocean water, but also brackish water. The latter is cheaper because there is not as much salt to remove, Hanak said.

“The general consensus is that water is becoming more expensive, because of all the investments needed to improve water infrastructure,” she said. “Most water systems are funded locally.”

Local funding comprises 84% of water funding in California, 12% to 14% comes from the state and a sliver has historically come from the federal government, she said.

“The federal matching funds vary, but even if we get a big boost from pandemic spending or the infrastructure bill, it might go up to 5%,” she said.

Poseidon received approval in December 2019 from the California Pollution Control Authority to issue up to $1.1 billion for its second desalination plant, in Huntington Beach. It would supply water to the Orange County Water District.

The Huntington Beach plant received its permit from the Santa Ana Regional Water Quality Control Board in April, but it still has to clear the State Coastal Commission.

The regulatory hurdles are steep, but other coastal cities are exploring desalination.

“It offers a template for high-capacity plants that could be built up and down the state,” Joffe said. “California has more coastline than Israel so there is every reason we could equal or exceed what they have accomplished if environmental review and litigation could be contained.”

Joffe penned an opinion piece for the Orange County Register in December 2018 that argued the state should look to the successes Israel has had in using reverse osmosis to provide water for its citizens.

“Like California, Israel has an arid climate,” Joffe wrote. “Unlike the Golden state, Israel has solved its water shortage by commissioning a series of privately built and operated seawater desalination plants. Built over a decade ago, five desalination plants now supply 70% of Israel’s drinkable water and a sixth facility is in the planning stages.”

The same financing mechanism used for the Carlsbad project can be reused for multiple additional facilities, especially now that rates are so low, Joffe said.