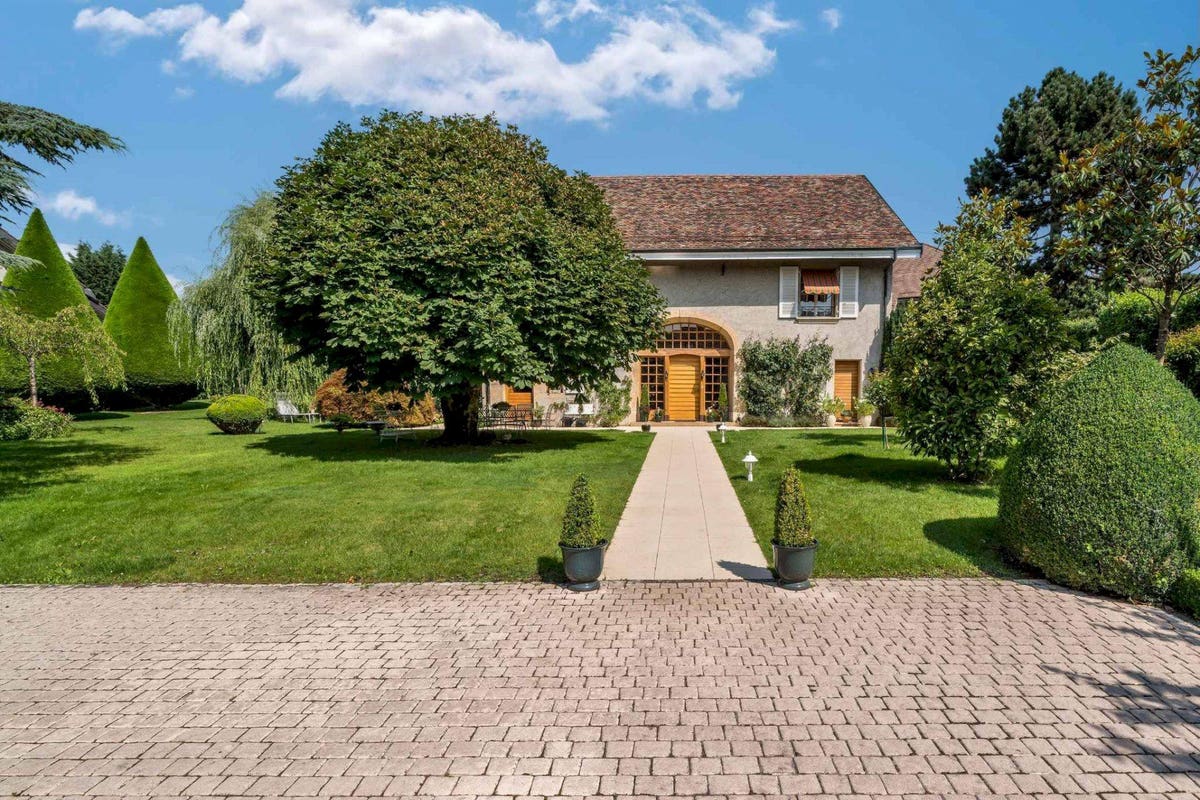 This tidy residence in the western Swiss village of Etoy was built in 1830 as a sheepfold. At the time, Switzerland was largely rural. Shepherds would move their flocks seasonally — grazing them during the summer months in mountain pastures and moving them in the winter to valleys, where they maintained homes.

Completely restored in 2011, the two-story house today sits on a half-acre dotted, not with lambs, but with mature and sculptured trees and shrubbery.

A broad walkway leads through the lawn to a front door topped by a wide arch of transom windows and flanked by paned sidelights. White shutters frame the windows, and ivy crawls up a corner of the façade.

The character continues indoors with high ceilings in the foyer, a wide flight of wooden stairs and a second-story landing adorned with lathe-tooled stair railings and richly paneled doors.

The fine woodwork throughout the home creates a warm, traditional vibe.

A wood-beam ceiling tops the main living room, which has a fireplace, tile floors and French doors. A dining room, an updated kitchen, a study and a guest bathroom complete the ground floor.

Four bedrooms and two bathrooms are on the next level.

The attic has more living space set beneath rough-hewn exposed beams. There is also an office and another bedroom for a total of five bedrooms and two bathrooms within the 286 square meters, slightly more than 3,000 square feet, of white-walled living space.

The house is surrounded by gardens and terraces. In addition to the garage, a large paved courtyard provides parking.

Aurore Lucido of FGP Swiss & Alps is the listing agent for the property, which is priced at CHF 3.8 million or about US $4.2 million.

The village of Etoy, between Lausanne and Geneva in the Vaud region, is family friendly with schools, a sports center with a swimming pool, tennis and shops. It is part of the Federal Inventory of Heritage Sites, which works to preserve nature and the culture of selected communities.

The Geneva Cointrin International Airport is about 36 kilometers, or 23 miles, away.

Lausanne, about 22 kilometers – or nearly 14 miles — from Etoy, has numerous attractions including museums, boat tours on Lake Geneva and restaurants. A train ride from Etoy to Lausanne will take about 25 minutes.

FGP Swiss & Alps is a founding member of Forbes Global Properties, a consumer marketplace and membership network of elite brokerages selling the world’s most luxurious homes.