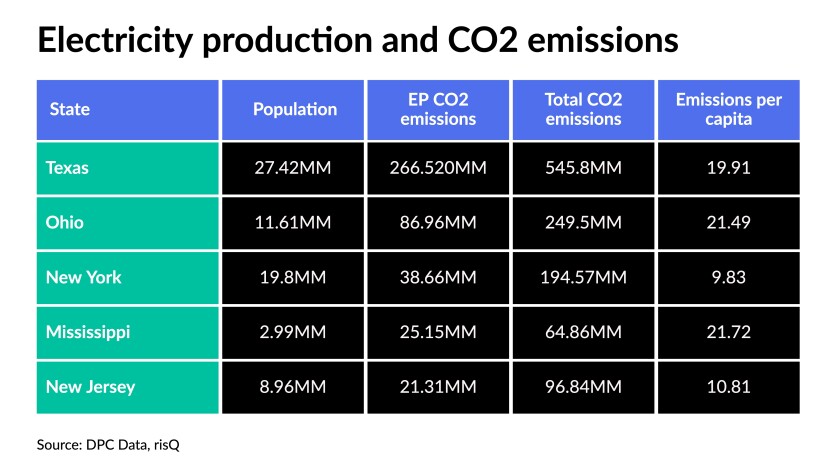 Carbon transition risk is both a credit and social impact risk for the municipal market and investors can and should explicitly incorporate views and data on carbon emissions into risk management and ESG-related decisions, a report from DPC Data and risQ says.

Carbon is a massive financial liability in the U.S., pegged at about $294 billion annually, the report says. In the electricity production (EP) sector alone — one of the largest components of the risk to municipal issuers — stands at about $116 billion annually.

“What drew us to this project was finding a way to come up with the methodology to quantify transition risk in dollar terms,” said Triet Nguyen, vice president, strategic data operations, at DPC Data. “It was interesting to at least put a number or estimate on this potential liability and the data show that it is significant. In some cases, the estimated transition liability may even dwarf the reported unfunded pension liability.”

The firms looked at 334 debt-issuing counties across five states and identified county obligors with high levels of exposure and vulnerability to the transition away from carbon intensive EP.

They define exposure as the level of CO2 emissions attributable to the EP sector, while vulnerability is defined as a municipality’s ability — given its financial, socioeconomic, and physical climate risk profile — to withstand the emerging risks posed by potential carbon policy as well as related social, political and financial pressures.

The firms looked at total CO2 liabilities for each debt-issuing county, and denominate CO2 liabilities in terms of each county’s total assets, general fund revenues, and assessed value according to the most recent year’s data sourced by DPC Data.

Scope 1 emissions data was sourced from Vulcan Project 3.0, a NASA-sponsored effort that estimates bottom-up CO2 emissions from multiple sources of fossil fuel combustion, and was merged with risQ’s 100×100-meter grid covering the U.S. The county-level data sourced from DPC Data.

The state with the most debt-issuing counties, Texas with 95, is also the state with the highest total Scope 1 EP emissions with about 266 million tCO2 emitted annually on average during the period 2010-2015, more than double the second highest emitting state of Florida, which recorded 119 million tCO2. Of the 334 county obligors, 202 have non-zero EP CO2 emissions.

There is a “useful conceptual parallel to the notion of inflation for municipal obligors with high carbon transition liabilities — regardless of the level of ‘obligorship’ of those liabilities — wherein the cost of living, commercial operations, project financing, and so on increase within a municipality’s taxable boundaries enough to materially impact credit,” the report says.

Areas with some of the worst physical climate risk contribute the most to emissions: Texas and Florida, two states with outsized physical climate change risk, have the highest electricity production liabilities.

One of the critical assumptions established when calculating each municipal obligor’s CO2 liability is the social cost of carbon (SCC), the report said. The interim figure proposed by the Biden administration is $51 for every metric ton of CO2. Harris County, Texas, for example, ranks No. 1 in aggregate carbon emissions with 67 million tCO2 annually, Applying the SCC figure, Harris County’s liability equates to $3.4 billion annually.

“The real novelty of what we’ve done here is to define the carbon transition vulnerability of each one of the thousands of obligors across the U.S. — both the financial vulnerabilities by using the DPC Data but also the socioeconomic risks using our Social Impact Scores,” said Collin Sullivan, chief operating officer at risQ.

A socioeconomic vulnerability analysis using all U.S. census tracts shows communities with the highest per capita electricity emissions are those with the highest levels of risks from an employment-sector perspective, have significantly lower educational attainment levels and more health risks.

“Of course, the estimated transition cost has to be assessed in the context of each local government’s fiscal resources,” Sullivan noted. “Some communities may display a large transition burden but they may also have the wealth and tax base to handle it.”

Communities that are currently heavily dependent on fossil fuel, and especially those that are vulnerable from employment, educational, racial and municipal credit perspectives, can and should be proactively targeted by appropriate public and investing capabilities, the report said.

Carbon-intensive municipal obligors will experience revenue and cost-line impacts, resulting in higher costs of living and operating for their constituents as a direct function of carbon transition mandates and/or as an indirect function of financial market and social pressures, the report notes.

In parallel, there is also a social impact to consider in any given carbon transition in the U.S. The local populations around carbon intensive locations will bear the brunt of any significant transition, but they also would bear the costs of not transitioning.

“Municipal bond issuers need to be aware as to what their liabilities are. Some of the issuers risQ studied are 5%, 6%, 10% reliant on electricity production on tax revenue streams that are based on fossil fuel-related operations,” said Chris Hartshorn, chief commercial officer at risQ. “From an issuer perspective, you’ve got to be aware. There’s got to be some disclosure about it.”

“If you’re buy-side, you want to know about the issue. Do you have a plan for this? What is your future plan if this tax revenue starts to dwindle? It starts with quantifying these risks,” Hartshorn said.

“The cost of the transition needs to be done in such a way that those who have been historically disadvantaged are not more so by it,” he said. Federal, state and local authorities are more than bystanders and need to be a part of the solution, he added.

“This would flow through to materially reduced county tax revenues and assessed values at the generation locations,” the report notes.

Potential credit positives include capital inflows from federal and state levels directed toward investments in renewable energy plants and infrastructure that could stimulate economic activity, the report says.

“Debt investors have the leverage to pressure issuers/utilities and the capital and apparatus to fund the transition away from fossil fuels,” the report says. “In the bigger (more abstract) picture, investors should also have the self-interest to do so — more fossil fuel burning equates to practically permanent increases in property and GDP losses from physical climate risk.”

U.S. municipal market investors, especially those with ESG, social impact or responsible investing mandates and genuine strategies, “can advocate for state-level legislation to accelerate the transition to clean energy that is equitable to people facing employment risk and those whose property values might suffer,” the report says. “State and federal investment should be weighted toward those often historically marginalized communities that both will be impacted by the economic implications of carbon transition and are comprised of populations least capable of doing so due to limited individual and collective financial and infrastructural resources.”