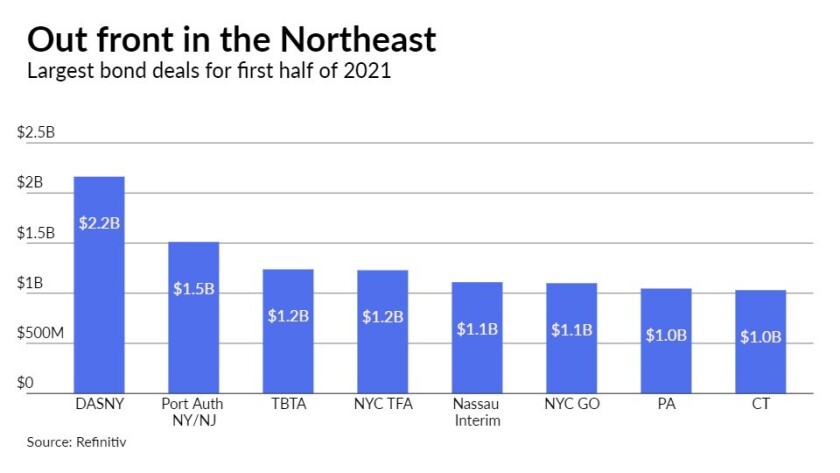 Northeast municipal issuers sold $59.9 billion of debt over the first six months of this year, up 4.8% from the same period of 2020 as states, cities and agencies adjusted to the COVID-19 environment and other variables.

Many traditional issuers, notably in infrastructure, topped the list, according to data provided by Refinitiv.

“You saw a very healthy response to market conditions, in my opinion,” said Natalie Cohen, president of National Municipal News. “Interest rates are still low and you saw capital improvements where they were needed.

“When you look at the top issuers in this region, you saw transportation, airports and large government offerings.”

“The use of taxables, while not new, is clearly here to stay,” said Joseph Krist, publisher of Muni Credit News. “It makes the case for doubling efforts at market expansion and all of these issuers certainly have name recognition.”

In addition, said Krist, the perception of credit risk clearly improved as reflected by the presence of many issuers who might have been seen as vulnerable pre-COVID.

“And why shouldn’t that perception have existed as the tsunami of federal money came in?” Krist added. “The limits on advance refundings and [private activity bonds] could not be clearer when you look at the state-by-state data.

“The doubling of issuance by New Jersey shows what stemming credit decline with tangible action can do.”

The New Jersey Turnpike Authority’s $995.2 million offering on Jan. 21 was the ninth-highest from the Northeast.

The Northeast’s largest sale was the $2.2 billion offering of state personal income tax bonds on March 19 by the Dormitory Authority of the State of New York.

Other big Northeast names included the Port Authority of New York and New Jersey; New York City — both general obligation and its Transitional Finance Authority, which backstops a portion of the city’s capital program; and the Metropolitan Transportation Authority’s Triborough Bridge and Tunnel Authority.

All executed deals that exceeded $1 billion. So did the Nassau Interim Finance Authority as well as Connecticut and Pennsylvania.

DASNY was the largest issuer in the nation during the first half, with more than $4.6 billion. New York City’s Transitional Finance Authority sold $2.4 billion, second in the Northeast.

The Port Authority’s $1.5 billion deal on Jan. 21 was the largest for transportation. The authority is observing its 100th anniversary.

Many states being in “hybrid” lockdowns freed issuers to complete broad, bridge and rail projects with fewer people on highways and transit during the pandemic.

New York MTA, for instance, was able to conduct more work on overnight projects with subways closed from 1 a.m. to 5 a.m. for much of the pandemic.

“We’re getting onto the track more often,” Janno Lieber, now the MTA’s acting chief executive, told board members. “We’ve gotten a ton of work done that’s actually being accelerated. If you’re going to shut down, you might as well do all the work at once.”

Connecticut made the region’s top 10 with a $991 million transaction on May 20. The state this year has been riding the wave of across-the-board upgrades from all four bond rating agencies.

They cited Connecticut’s buildup of reserves to its legal maximum of 15% of general fund spending.

Connecticut intends to complete two bond transactions by year’s end, state Treasurer Shawn Wooden said. The first one is up to $500 million of special tax obligation transportation infrastructure bonds. The other one, for up to $800 million of tax-exempt general obligation bonds, will fund local school construction and clean water fund grants, and other projects statewide.

“A lot has happened this year,” said Tom Kozlik, Hilltop’s head of municipal research and analytics.

One major development, Kozlik said, was the unexpected win by Democrats in both Georgia runoff elections for the U.S. Senate, giving that party a majority when factoring in a vice-presidential vote to break a 50-50 tie.

“I was expecting there to be some federal relief around the periphery, but I wasn’t expecting direct, almost unencumbered relief that was going to flow through to stakeholder governments,” Kozlik said.

“What we saw was that the Democrats took both of those Senate seats in Georgia and right after that, most knew that that would really set up Democrats to get something done.”

Variables that could affect issuance in 2022, Kozlik added, include new pandemic waves, interest rates and the fate of infrastructure legislation.

“I think interest rates are probably going to stay a little lower, longer,” he said.

BofA Securities was the top Northeast bookrunner in the first half of the year, which Reinfinitiv credited with $12.4 billion of deals.

New-money issuance jumped 35%, to $48.7 billion from $36 billion. “New money is in pretty good shape,” Cohen said. “Is it big enough to do major projects? That’s a big question.”

Variables, according to Cohen, range from federal legislation including a $1 trillion infrastructure bill that is bogged down in Congress to the level of vaccinations and a moratorium on housing evictions.

New data from the U.S. Census Bureau, notably through its “household pulse” survey, sheds some light on economic projections.

Massachusetts, for instance, has a roughly 52% vaccination rate, the same as New York State, but the Census Bureau projects 64.2% of respondents are likely to receive the vaccine, compared with about 52% for New York.