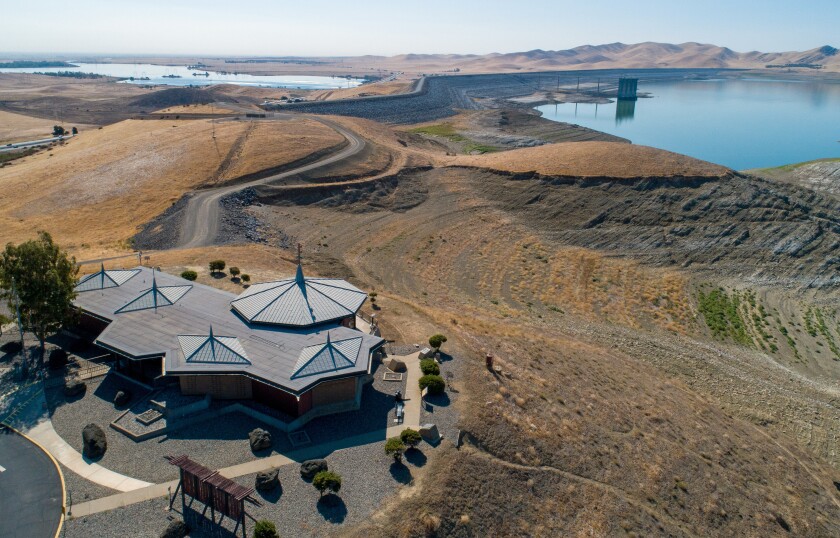 In California, some communities are contemplating desalination and other ways of stretching water supply after two exceptionally dry winters.

California relies on precipitation from November through April to provide the water it uses throughout the year. The two dry winters have left reservoirs at low levels with months to go before hoped-for winter rains and snowfall.

Desalination is one highly capital-intensive and environmentally controversial response.

The firm Poseidon received approval in December 2019 from the California Pollution Control Authority to issue up to $1.1 billion for its second desalination plant, in Huntington Beach.

The company’s first plant in Carlsbad opened in 2015.

The Huntington Beach plant received its permit from the Santa Ana Regional Water Quality Control Board in April, but it still has to clear the State Coastal Commission.

Poseidon’s first plant, in Carlsbad, was built as a partnership between the San Diego County Water Authority, Poseidon and other partners.

Bonds for the Claude “Bud” Lewis Carlsbad Desalination Plant and a related pipeline were issued by the California Pollution Control Financing Authority, a conduit issuer under the auspices of the State Treasurer’s Office, in December 2012.

The CPCFA issued $530.3 million of private activity bonds on behalf of Poseidon to build the plant and $203 million in tax-exempt governmental bonds on behalf of the water authority for the 10-mile pipeline. CPCFA won the Bond Buyer’s Far West Deal of the Year award in 2013.

It has taken decades to clear approval hurdles for both the fully-operating Carlsbad plant and the sister plant in Huntington Beach, but other coastal cities are exploring desalination.

“These things are tough, because of the environmental approvals they have to go through,” said Tim Schaefer, deputy treasurer for public finance. “And in the environment we are in right now Poseidon would need some public activity bond allocation. And there is a lot of competition for that right now.”

Santa Barbara brought a desalination plant that had been decommissioned back on line in 2017.

The capital costs to reactivate the facility were $72 million financed over 20 years with a 1.6 percent interest rate loan, according to the city’s web site, which equates to $4.2 million per year in debt service.

In 2018, the city was awarded a $10 million grant from the state’s Department of Water Resources, which significantly reduced the overall cost of the project, according to the city. The grant came from Proposition 1, a state general obligation bond passed by voters in 2014 to fund water quality, supply, and infrastructure improvements. Annual operating costs are estimated to be about $4.1 million at full production and about $1.5 million in non-operation or standby mode.

Antioch, in the San Francisco Bay area, is moving ahead on plans for a $110 million desalination plant to maintain drinking water for its more than 100,000 residents as the Delta provides increasingly brackish water.

The State Treasurer’s Office hasn’t organized a cross-conduit effort for water, as it has for housing and K-12 school construction bonds, but is evaluating what headroom it has in existing bond measures to support projects, Schaefer said.

“I would not say we are seeing bonds sold for water projects right now,” Schaefer said. “We are just looking at the obvious water propositions that have room to issue more bonds.”

The Proposition 1 bonds from 2014, of which voters authorized $7.5 billion, has $5.5 billion to go, Schaefer said. The $4.1 billion Proposition 68 from 2018 that includes money for drought, water, parks and coastal water production has $3.5 billion remaining, he said.

Once voters approve a bond measure, it returns to the finance committee, who authorizes the sale creating a binding contract for future bond investors, Schaefer said.

Tuesday, Gov. Gavin Newsom suggested he may put mandatory water restrictions in place as soon as six weeks from now as the state’s historic drought continues to worsen.

“Drought is very much on the mind of this administration, as it was for the Brown administration,” Schaefer said, referring to Newsom’s predecessor, Jerry Brown.

Newsom made the announcement as he evaluated recovery efforts with U.S. Environmental Protection Agency Administrator Michael Regan at Big Basin Redwoods State Park in the Santa Cruz Mountains. A massive wildfire burned through the park’s ancient redwoods a year ago.

“At the moment, we are doing voluntary,” Newsom said.

If the state appears to be entering its third year of drought by the end of September, stricter restrictions could be considered, Newsom said.

During the statewide drought from 2012 to 2016, former Gov. Jerry Brown implemented mandatory water conservation targets that asked communities to reduce water use by 25% when the drought entered its third year.

Currently, 88% of the state is in drought, according to the U.S. Drought Monitor, a weekly report issued by the U.S. Department of Agriculture.

Newsom has already declared a drought emergency in 50 of California’s 58 counties, which can make them eligible for state and federal assistance.

Of this amount, $2.1 billion in the general fund over three years is set aside for water resilience investments that will be negotiated this summer, according to H.D. Palmer, a spokesman at the Department of Finance.

“The Administration is continuing its discussions with the Legislature on how to allocate the remaining $2.1 billion for water resilience investments that was deferred for action until after the budget was approved,” Palmer said. “As these discussions are still continuing, we don’t at this point have specific details to announce.”

NAWI was awarded a $100 million grant from the US Department of Energy, which has a 25% cost share requirement from non-Federal sources, Palmer said. Funding from this request, will contribute to the nonfederal share, he said.

“The purpose of the research is to identify possible desalination efficiencies and reduce energy use,” Palmer said.

With 11 Western states suffering from intense drought, S&P Global Ratings analysts are watching credits that could be affected.

S&P has not taken any ratings actions solely related to drought, “but if conditions intensify to a degree that affects long-term credit stability we may make a rating or outlook change,” S&P analysts wrote in a Wednesday report.

“While our municipal ratings largely incorporate drought conditions, we remain on alert for potential impacts throughout the region such as increased risk of catastrophic wildfires, drinking water shortages, electric grid disruptions and land subsidence, all of which could lead to credit events without mitigation measures,” analysts wrote.

Hackers take over Azuki’s Twitter account, steal over $750K in less than 30 minutes
New York AG will seek sanctions on Trump, lawyers over ‘false’ court filings in fraud suit
Bitcoin bulls plan to flip $23K to support by aiming to win this week’s $1B options expiry
Here’s what the Federal Reserve’s 25 basis point interest rate hike means for your money
Millionaire Renters Have Tripled Since 2015