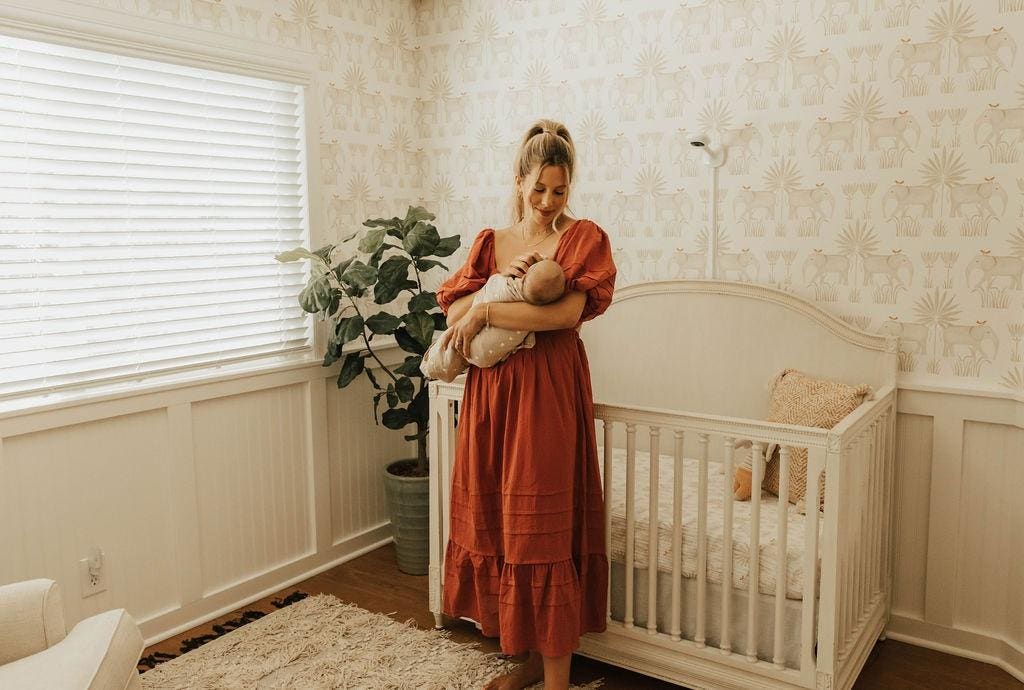 With the second season of The Hills: New Beginnings recently coming to a close, it’s been a very busy time for Jason and Ashley Wahler, especially with the arrival of their baby boy, Wyatt Ragel, who was born on June 16th, 2021. Although he was busy making his television debut on the last episode, he’s spending most of his time away from the camera in his safari-themed meet boho-chic gender neutral nursery.

While the space might look as if it were put together by a seasoned interior designer— Ashley Wahler surprisingly designed the room herself. While some aspects of this were easy, anyone who is currently trying to complete a home improvement project will tell you nothing ever goes quite according to plan during the pandemic.

The elephant theme of the room was chosen not only because elephants are good luck, but also because elephants have been a part of Wahler’s family history. “My mom lived in Africa for two years when she was younger. So she used to tell me these stories. As a kid, she would do her homework outside, and there’d be elephants and giraffes eating from the bushes. It was something I always loved hearing stories about. So, when I saw this beautiful wallpaper, it just reminded me so much of my mom telling me these stories. The colors were so beautiful. It was very neutral,” she reveals.

In addition to being perfect for Wyatt’s nursery, the design also has a versatile quality to it. “We could use it in the room forever or turn it into an office. The wallpaper is just so pretty.”

However, obtaining the wallpaper was far more of a challenge than choosing it. “Everything is delayed. So getting that wallpaper was a mission. It’s from Serena and Lily. The wallpaper was back-ordered and they kept telling me they didn’t know when it was going to come in. This was my whole entire vision. I really wanted to have this very bohemian eclectic, safari vibe. My good friend Kelly Nutt is a big designer in Orange County. She [ended up] having her assistant go all the way out to Northern California to get that wallpaper for me. I kid you not! I was so grateful I was literally in tears. This quality problem was so embarrassing, but I was pregnant.”

The crib and changing table are from Restoration Hardware’s Bellina Conversion Collection. It was previously used in her daughter Delilah’s nursery.

Although Wahler was planning to use this set for her indefinitely because the crib converts to a full-size bed, Delilah’s bedroom in their new home only fits a twin-size bed. She also loved the set and wasn’t quite ready to part with it. “So I started laying out pictures of what it would look like with like wallpaper and using the same crib and different kinds of knobs. I figured it is gender-neutral.”

This also turned out to be a smart choice that made life easier. “Let’s be honest, if I were to order another crib, who knows if it would have gotten here in time?”

However, the smart mom made one minor change, swapping out the original knobs for new ones purchased from CB2.

One of the most noticeable pieces in the room is the Bamboo Open Weave Orb Pendant Shade from World Market. “I’m a really big budget finder,” she says, “I love [choosing] expensive pieces and then mixing them with some other less expensive pieces. World Market is great for that,” she tells me.

The rug is from Rugs.com, which Wahler shares is another one of her favorite go-to’s for home accessories. “This rug was very reasonable, I think under $200.”

The mom also notes that she doesn’t think it is smart to overspend on rugs for children’s rooms because there’s a good chance they will inadvertently become stained or damaged.

Another place she likes to shop is Homegoods, which is where she bought the pillow she used to refresh the look of the glider.

One of Wahler’s favorite pieces, a knit elephant, is one of a kind. “My cousin made that for me for my baby shower. She spent weeks making it, hand knitting it and I felt like that was such a beautiful piece to add to the room. It just felt so special.”

Her Advice For Other Moms

Designing a chic nursery on your own isn’t always easy. Wahler’s best advice for other moms is to stop overthinking the process. “Don’t put so much pressure on yourself, who knows how long the kid will be in your bedroom before they go into the nursery?”

She also suggests reusing children’s furniture for the next child and swapping out the hardware and bedsheets. “It really can change the whole entire nursery,” she says.

Wahler also recommends reaching out to your friends “A lot of times, they will use a crib for a short amount of time and then their kid will grow out of it. Or they have a crib from a while ago that they’re storing. The same thing with a bassinet, ask your friends, do you need this right now? A lot of times friends will let you borrow, which is great, especially if you’re on a budget or even if it’s during this time when you can’t get something that you want right now.”