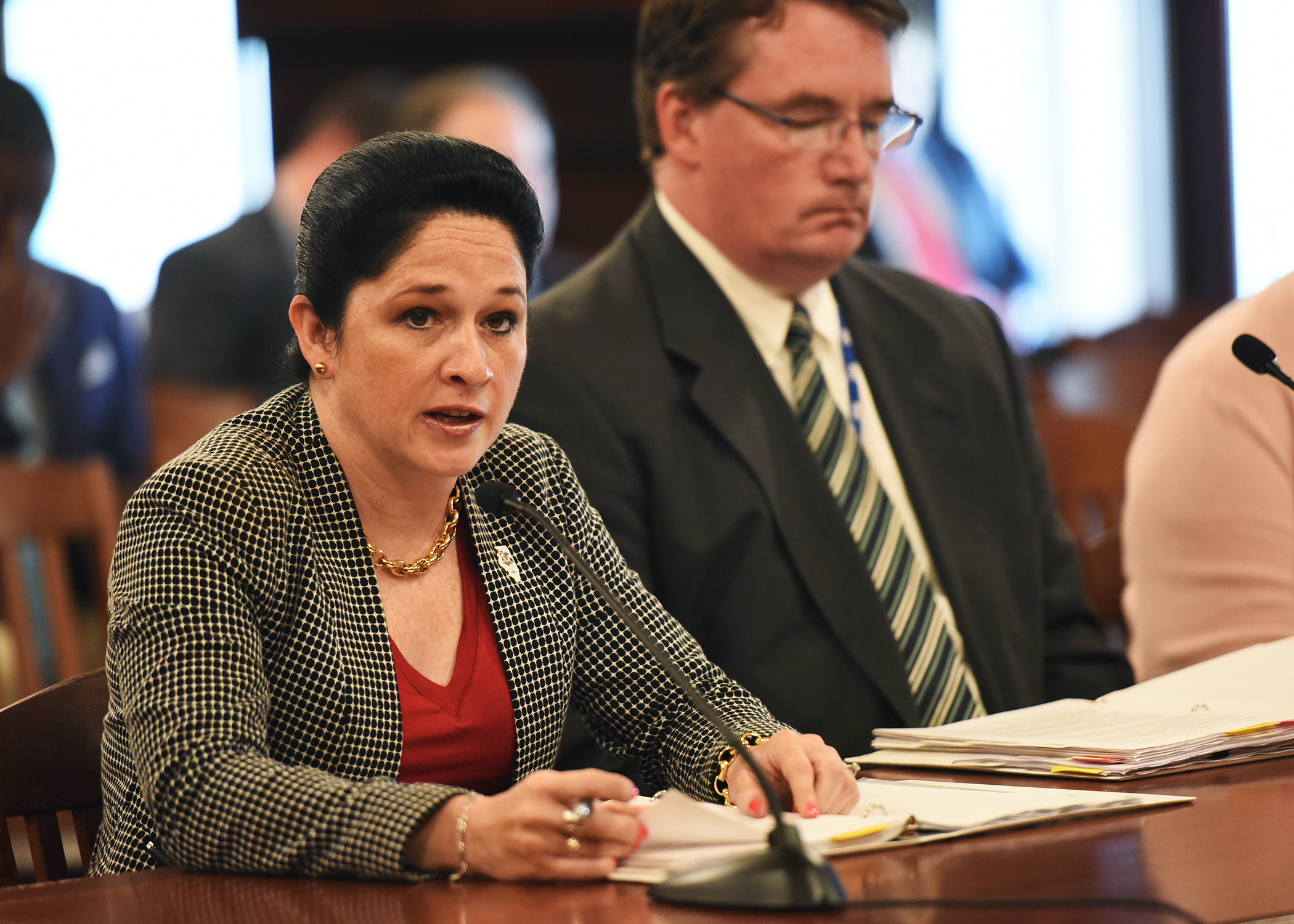 Automatic transfers into Illinois’ meager budget reserve and empty pension stabilization fund would kick in when the state holds its unpaid bill backlog below $3 billion at fiscal year close under legislation Comptroller Susana Mendoza is promoting.

The low rainy day balance is one of the factors that keeps Illinois’ bond ratings the lowest among the states.

Analysts took the state to task for failing to build up reserves during the economic recovery that followed the 2008 financial crisis, as many other states did, leaving little room to maneuver when revenue plummeted in spring 2020 due to the COVID-19 pandemic-driven economic shutdown.

“Illinois is one of just a few states with no sizable amount of money in its rainy day fund,” Mendoza said in a statement. “We’ve worked hard to manage back-to-back fiscal crises in Illinois — the two-year budget impasse and the COVID-19 pandemic. There’s no question our state must do a better job of planning for future emergencies. It’s the fiscally responsible thing to do.”

The impasse refers to the two years when state’s previous governor, Bruce Rauner, a Republican, could not agree on a budget with the Democratic-controlled legislature.

Gov. J.B. Pritzker’s office did not provide a comment on the legislation that was introduced earlier this month.

House Bill 4118, sponsored by state Rep. Mike Halpin, D-Rock Island, would trigger automatic deposits of up to $200 million into each fund beginning in fiscal 2023.

“It’s time for Illinois to take advantage of our recent financial momentum and begin to prepare for future rainy days,” Halpin said a statement.

Every May beginning in 2023, the comptroller would report to state leaders the estimated backlog of bills at the end of the fiscal year and if the amount is less than $3 billion at the fiscal year close then transfers would be triggered.

On the last day of each month over the next fiscal year, the treasurer would transfer the lesser of $200 million or the amount necessary to maintain the rainy day fund at 5% of the total general fund revenues. The transfers would occur in equal monthly installments. There’s no cap on the pension account.

The transfer rules give the comptroller’s office and lawmakers some leeway to halt transfers or dip into the fund for certain purposes so they wouldn’t enjoy a firm lockbox structure that makes withdrawals and repayments as difficult as in some states.

The comptroller could halt transfers after notifying state officials that the backlog is in danger of rising above $3 billion and could seek a transfer to the general fund to hold it in check. The General Assembly could dip into the fund for the upcoming fiscal year as necessary to provide for the health, safety, and welfare of citizens.

Backers will press for passage of the bill during the state’s 2023 session and while the state’s bill backlog has only just recently at times dipped below $3 billion the hope is the state can keep chipping away at its accounts payable tab so that regular transfers would be triggered.

The tally last week was at $4.1 billion. Under existing law, the comptroller can draw from the rainy day fund when the backlog exceeds $4 billion. The backlog peaked at $16.7 billion in November 2017 as the full weight was felt from the recently ended two-year budget impasse and it’s mostly been heading downward since.

Mendoza told rating agencies the backlog hit a years-long low of $3.5 billion in a letter making the state’s case for upgrades ahead of the receipt of the state’s $8.1 billion of federal American Rescue Plan Act money. It has hovered between $3 billion and $4 billion since but has on some days dipped below $3 billion, said comptroller’s office spokesman Abdon Pallasch. It was at $3.2 billion at the start of the current fiscal year.

Illinois first established the budget stabilization fund in 2000, according to the legislature’s Commission on Forecasting and Accountability. It was first funded with a $226 million deposit form the tobacco settlement recovery fund that was made in 2001. It received an additional $50 million infusion in 2004.

That fund was first established in a state pension overhaul approved in 2013 to pay down pension liabilities, but no deposits were ever made. The Illinois Supreme Court later overturned the benefit cuts as unconstitutional.

For the budget stabilization fund, the state enacted a target of 5% of the state’s annual general funds revenues in 2004, according to a Chicago Civic Federation report.
Deposits into the rainy day fund are currently triggered by projected revenue growth of more than 4% from the prior year, which has not resulted in any material deposits. When lawmakers approved the sale of recreational cannabis in 2019 they earmarked 10% of cannabis tax revenues, after various administrative expenses are covered, for the rainy day fund.

The state has fallen far short of stated goals for the fund. It held $125 million at the close of fiscal 2016. Over the next four years it was empty at fiscal year close, according to the state’s last offering statement. A healthy fund balance for the state of Illinois would be at least $2 billion, or 5% of the fiscal year 2013 general funds revenues, COGFA wrote in 2014 report.

“After the backlog of bills is paid off and the state has recovered financially from the pandemic, the state of Illinois should work toward building a rainy day fund equal to 10% of general funds revenues to cushion the budget from the next economic downturn,” the Civic Federation recommended in its fiscal 2022 budget review.

“Legislation must explicitly indicate when deposits will be made and in what amount and the circumstances under which withdrawals will be allowed,” the federation wrote.

“Building a meaningful reserve fund will likely take several years, but achieving that would also support credit quality by improving the state’s resilience in the event of inevitable economic downturns,” said Fitch’s lead Illinois analyst, Eric Kim. “Not having a substantive reserve fund was one of the reasons Fitch downgraded the state last year.”

Early in the pandemic Fitch downgraded the state one notch to BBB-minus and assigned a negative outlook. Fitch moved the outlook to positive from negative in June.

“Illinois’ lack of any significant budgetary reserves makes the state more exposed to economic downturns and is consistent with its weaker governance profile,” Ted Hampton, lead Illinois analyst at Moody’s Investors Service, said, speaking generally. He did not comment on the bill proposal.

Moody’s in June upgraded the state’s general obligation rating to Baa2 from Baa3 and assigned a stable outlook recognizing its pandemic recovery with growing tax revenues and federal help.

S&P Global Ratings lead Illinois Geoffrey Buswick also did not comment directly on the legislation but said “we have commented in past credit reports that the state’s lack of money in the rainy day fund was a negative rating consideration so funding a reserve would, in turn, be a positive credit condition,” although that can depend on future actions and whether legislatures abide by the goals. S&P upgraded the state to BBB in July.

“It is significantly underfunded or, more accurately, practically non-existent,” said Howard Cure, director of municipal bond research at Evercore Wealth Management. “There is clearly a need for all states to establish and maintain a rainy day fund for basic economic downturns.”

In states where revenues tend to fluctuate the most, usually based on capital gains, there have been legislative changes to place monies in reserves and/or deal with liability backlogs or pension issues, Cure said. Other states have reserve policies set at a specific level of expenses or revenues and rules on withdrawals and repayment.

The Volcker Alliance in a 2019 report said states had amassed $62.4 billion in rainy day funds, more than double their level at the end of the 2007–09 recession. Seven states — Illinois, Kansas, Kentucky, Maryland, Nebraska, Ohio, and Wyoming — lacked or have limited policies governing use of rainy day funds. “Many of the other forty-three could improve their procedures for withdrawals,” the alliance said in the report.

Reserves came in handy heading into the pandemic.

Pew reported in May that the total amount set aside in state rainy day funds fell for the first time since the Great Recession as lawmakers in fiscal year 2020 filled early pandemic-drive budget gaps. Fifteen states tapped a total of $12.4 billion from rainy day fund and nearly a third of states reported declines in the total dollar amounts of their savings—the most since 2010, Pew said citing data from the National Association of State Budget Officers.