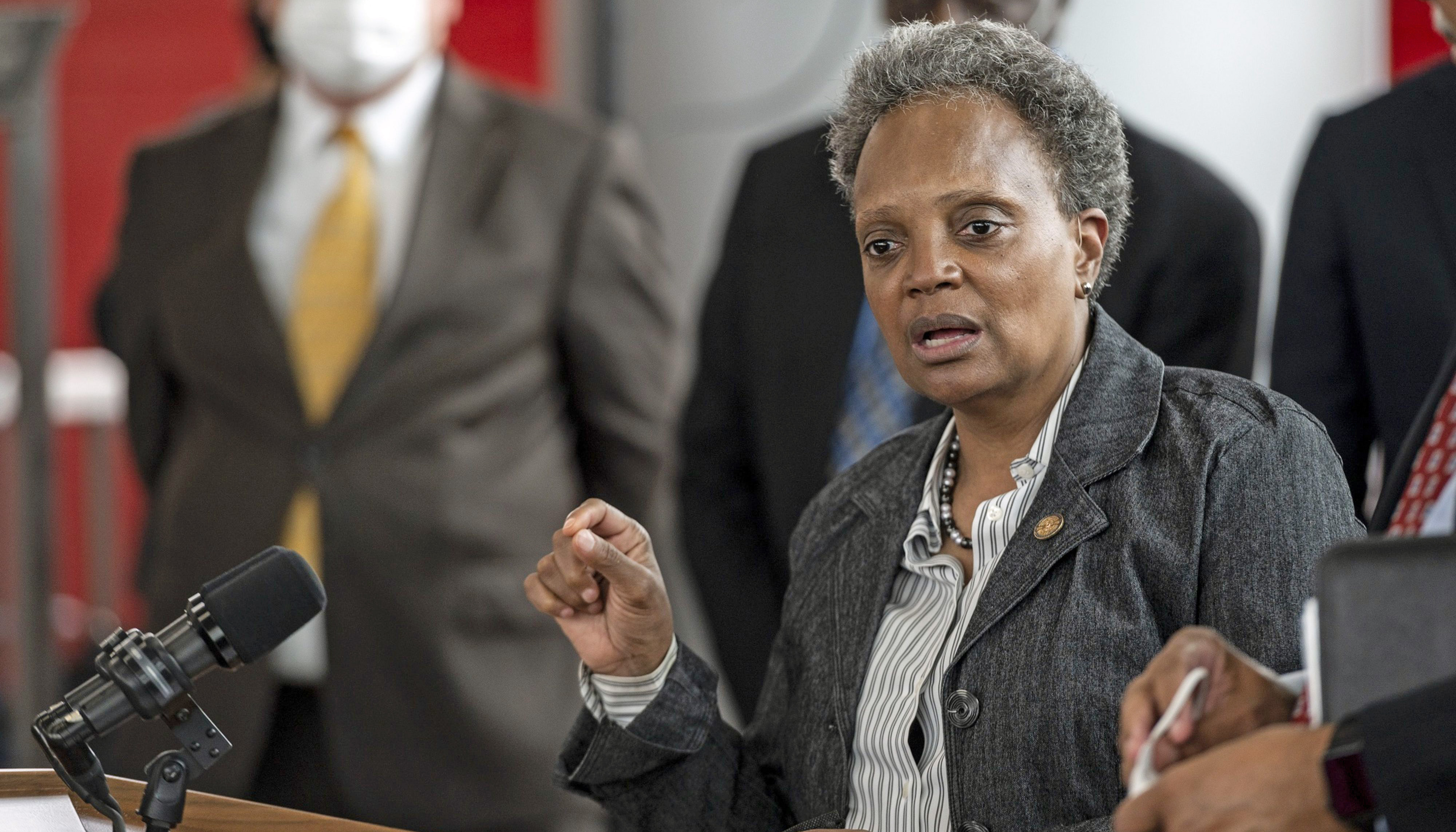 Chicago must close a $733 million gap in its next budget as it looks to federal relief and savings from a $1 billion refunding to balance the books this year after scrapping scoop-and-toss plans.

“While we still have hard work ahead of us in order to close this gap, this figure is a great indication that our city is fiscally bouncing back from this crisis,” Mayor Lori Lightfoot said at a news conference Wednesday with the city’s finance team to announce the 2022 budget forecast. “Last year we were faced with a $1.2 billion pandemic budget. This year we have shifted to a recovery budget.”

Before tackling the shortfall that looms in the 2022 budget Lightfoot plans to unveil next month, the city must close a revised gap in the current budget of about $1 billion after accounting for $210 million in higher-than-projected revenue collections.

The city will use $782 million of its $1.9 billion from the American Rescue Plan Act signed last March and expects $230 million from a roughly $1 billion refunding later this year to fill that hole. The latter is specifically earmarked to cover much of a new expense — $274 million — not originally budgeted for to cover a retroactive raise under a proposed police labor contract.

In addition to the police contract, the current-year hole deepened as the city previously nixed $500 million of scoop-and-toss debt restructuring that was part of the city’s 2021 budget fix approved last November. The city also will now dip into its corporate fund to repay a $450 million short-term credit line used to help balance the 2020 books.

The city took out the line with JPMorgan late last year to delay the first tranche of scoop-and-toss debt restructuring, rolling the dice that the federal government would eventually approve additional relief that could go to cover revenues losses. The March 2020 CARES Act only covered pandemic-related expenses.

The $1.9 billion fiscal lifeline from ARPA allowed the city to preemptively cancel the planned $500 million debt restructuring as pushing off debt service provided the city with a fix for revenue losses, an eligible expense of ARPA funds.

But the city can’t repay the $450 million 2020 credit line as the U.S. Treasury’s May guidance barred using ARPA dollars to pay off debt. The city appealed to Treasury ahead of a mid-July deadline to submit comments but it’s no longer banking on a change in guidance.

The city will pay off the line later this year after City Council passage of the new budget, which is expected in October, according to Chief Financial Officer Jennie Huang Bennett.

The city estimates its revenue losses that can be compensated for with federal funds at $750 million for 2020 and are projected at $250 million to $300 million for this year. The $782 million fits within those parameters.

The city expects to issue a roughly $1 billion refunding in the fourth quarter that will generate an estimated $230 million of savings to be taken upfront, much like a prior refunding that helped close a pre-COVID-19 deficit.

“There is no extension of debt or the term of the debt and there is no increase in debt service in any year. It’s truly a refinancing for savings,” Bennett said. “It’s a great time for the city to be in the market now. Our credit spreads have come in significantly since last year and interest rates are very low.”

The city expects to mostly refund general obligation bonds but will use both the GO credit and its higher-rated Sales Tax Securitization Corp. credit with more being moved to the STSC credit.

The city, which does all its deals using a negotiated structure, last week launched a request for qualifications process to establish a new underwriting pool. Bennett said firms already named to deals would keep their spots.

The Chicago Civic Federation said it was encouraged by the forecast that shows signs of economic recovery and believes the use of ARPA dollars to make up for revenue losses is appropriate, but will be watching to see how the city tackles rising costs next year.

As for the 2021 plan, the federation said “use of economic savings from a debt refinancing to pay retroactive costs on the new police contract prudently matches one-time revenues to a one-time expense. However, taking savings upfront, as the city plans to do, still creates gaps in future years’ budgets that will need to be filled.”

2022
Looking ahead, the city’s projected $733 million 2022 gap — with general fund revenues at $4.2 billion and expenses at $4.95 billion — is due to growing fiscal demands totaling $913 million while the city expects revenue growth of $180 million. The $180 million marks an improvement over 2021, but revenues are still suffering the lingering pandemic effects.

The city is eyeing further use of its remaining ARPA funds, management efficiencies, financial reforms and is “exploring new revenue sources” to close the future hole, according to forecast documents.

Lightfoot tamped down concerns of another property tax hike. City council members pushed back hard against a $94 million hike last year, but in the end a narrow majority swallowed it.

“It’s our hope that we will not raise taxes” beyond a scheduled increase tied to inflation, Lightfoot said specifically referencing the property tax.

City council members agreed as part of the $94 million hike last year to include an annual levy adjustment based on the consumer price index. The city expects that scheduled increase to be around $20 million.

The city will lay out how it intends to use the remainder of its ARPA funds along with the budget proposal but Lightfoot said the city will tread cautiously to avoid creating a deeper hole to deal with in future years.

The next budget will mark the first year all four city pension funds reach an actuarially based contribution. The police and firefighters finished a ramping-up period to an ARC in the 2020 budget and the municipal and laborers will jump to an ARC next year.

Total contributions jump to $2.28 billion in 2022 from $1.8 billion this year. Most is due to the jump to an ARC for muni and laborers. Payments totaled just $1 billion in 2017 underscoring the rising burden being absorbed by the city under an overhaul approved under former Mayor Rahm Emanuel to move the funds to a 90% funded ratio between 2055 and 2058.

Despite the increases, the funds remain frail. The city’s collective net pension liabilities stand at $32.96 billion and the funded ratios range from a low of 18.97% for firefighters to a high of 44.42% for the laborers fund with the municipal fund at 22.96% and police at 22.21%.

Bennett said the city remains on track to reach structural balance in 2023. That target was previously pushed off a year from 2022 to 2023 as the pandemic set back fiscal goals. “We believe we will be able to hit that target,” Bennett said, citing structural changes on both revenues and expenses in recent years and an expected economic recovery.

Moody’s Investors Service — the sole rating agency that has the city GOs at a junk level — recently raised the outlook to stable from negative in recognition of its recovering fiscal picture. S&P Global Ratings which rates the city at BBB-plus last year moved the outlook to negative, but in a recent report said it would hold off on restoring it to stable as it looks to the city to reach structural balance in 2023.