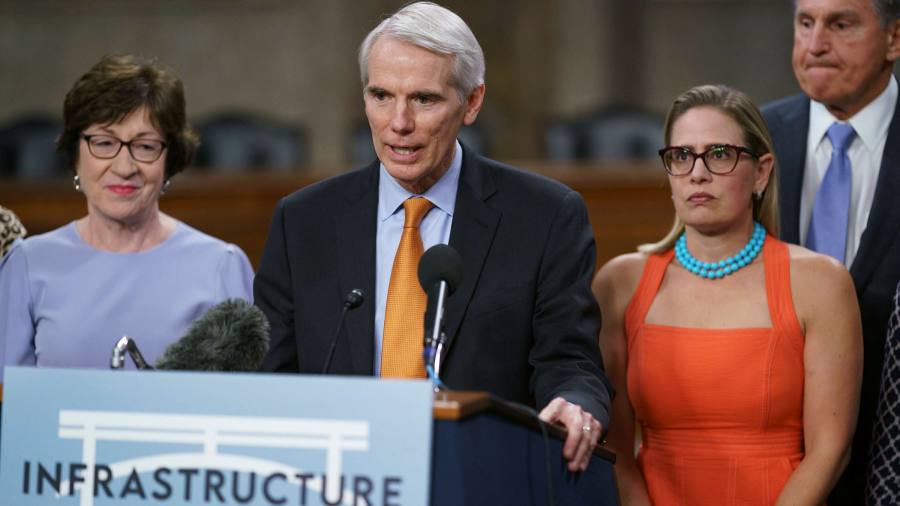 The US Senate is set to pass a $1tn package to invest in America’s crumbling infrastructure with significant Republican support, a bipartisan vote that will be seen as a major legislative achievement of Joe Biden’s young presidency.

Senators voted 68-29 late on Sunday to end the debate on the infrastructure bill, setting up a final vote for either late on Monday or early on Tuesday. Eighteen Republicans joined with Democrats in clearing the procedural hurdle, a rare cross-aisle display in a Senate that is sharply divided, 50-50, between the two major US political parties.

A similar number of Senate Republicans are likely to back the final passage of the bill, which focuses on so-called hard infrastructure, including $110bn for roads, bridges and other major building projects, along with $66bn in passenger and freight rail and $39bn in other forms of public transport.

Once the bill is passed by the Senate, it will need to be approved by the Democrat-controlled House of Representatives before Biden signs it into law.

When asked on Monday how close senators were to the “finish line”, Rob Portman, the Republican senator from Ohio who helped broker the deal, said: “It is right around the corner.”

Portman, who spearheaded the agreement along with Arizona Democrat Kyrsten Sinema, told CNBC: “Based on the test votes in the last four or five days, it appears as though we will have about 18 or 20 Republicans joining most every Democrat to pass it . . . it will be a big bipartisan victory.”

The Senate has already considered dozens of amendments to the 2,700-page infrastructure bill, slowing down its passage. One of the sticking points over the weekend was language surrounding the taxation and regulation of cryptocurrency transactions, which the White House wants reported to the Internal Revenue Service as part of wider efforts to beef up tax compliance.

Lawmakers appeared to strike a deal on the crypto provisions on Monday, after a small group of Republicans and Democrats said they had worked with the US Treasury to “clarify the underlying text and ensure that those who are not acting as brokers will not be subject to the bill’s reporting requirements”.

Biden, a Democrat who spent more than three decades in the Senate, campaigned for the White House on a promise to work across the political divide. But his early efforts to craft a sweeping infrastructure package with Republican support hit a roadblock earlier this year when White House talks with a group of Republican senators led by West Virginia’s Shelley Moore Capito collapsed.

The fortunes reversed, however, when a group of 10 lawmakers — five Democrats and five Republicans, including Portman and Sinema — hashed out an agreement in June that they said would garner the support of at least 10 Republicans required to clear the Senate’s 60-vote filibuster threshold. Their deal was endorsed by the White House, which has worked in recent weeks to galvanise public support for the proposals.

Republican support for the bill has grown despite attempts by Donald Trump to derail the legislation, one of the first signs the former president’s hold on the party may be weakening.

Trump, who repeatedly promised to push through aggressive infrastructure investment during his four years in the White House but failed to make any specific proposals, has sought to exert influence in his party ahead of next year’s midterm elections, when control of the Senate and House will be up for grabs.

The former president threatened on Saturday to withhold endorsements for any Republican who he said was “foolish enough to vote in favour of this deal”. But that did not stop more than a dozen Republicans from voting to advance the legislation late on Sunday.

Republicans remain united, however, in their opposition to a second major spending bill put forward by Biden and his Democratic allies. Congressional Democrats on Monday separately published details of their plans for a $3.5tn budget that they intend to pass without Republican support using a Senate procedure called reconciliation.

The budget includes many progressive priorities that were left out of the bipartisan infrastructure plan, such as an expansion of paid medical leave benefits and school programmes for children younger than kindergarten age. It also includes a tax increase for American families making more than $400,000 a year.

One thing the budget proposal lacks is a provision to raise the debt ceiling, the maximum amount the US government can borrow by issuing bonds. That could set up a fresh battle later this year between Democrats and Republicans, who have said they are opposed to an increase in government borrowing.