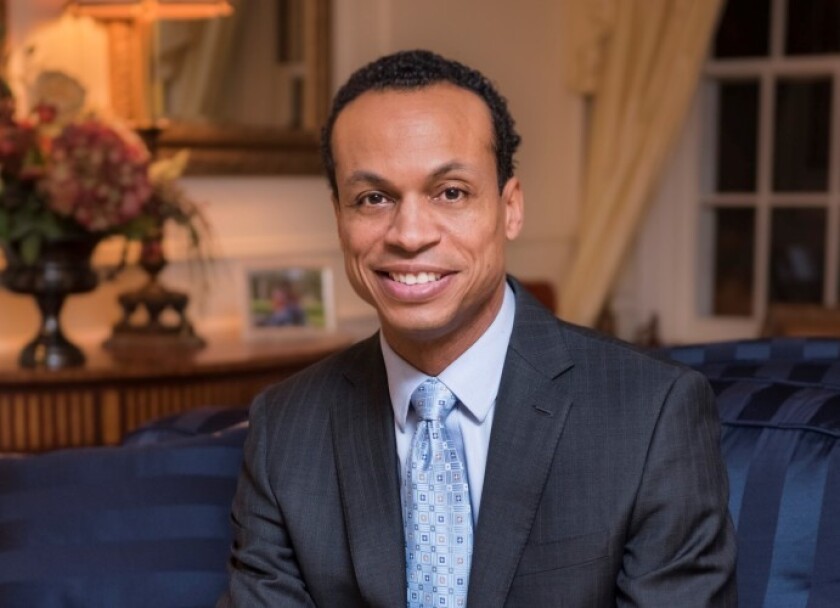 “I know how the cycle of poverty helped push people back,” he said.

That helped shape his push for his “passion project” for the past legislative session — CT Baby Bonds. The program, which Wooden calls first in the nation, took effect June 30 after Gov. Ned Lamont signed the measure.

Children born into poverty whose births are covered by Husky, Connecticut’s Medicaid program, are eligible for the program. The state is funding the baby bonds through its general obligation bonds, with $50 million per year authorized over 12 years, or $600 million.

Blumenthal has filed a bill that would establish a federal version. Co-sponsors of the American Opportunity Accounts Act include Rep. Rosa DeLauro and Rep. John Larson, both Connecticut Democrats.

“We must push for baby bonds in every corner of the country,” Blumenthal said.

New York City announced such a program one in June as part of Mayor Bill de Blasio’s “Juneteenth Economic Justice Plan.” The Juneteenth holiday commemorates the end of slavery in the U.S. The city will grant $100 baby bonds to every public-school kindergartner beginning next school year.

Lilliam Barrios-Paoli, an advisor to the president at Hunter College and a former New York deputy mayor, recommended baby bonds as one of 250 ideas to revive the city’s economy in a report by think tank Center for an Urban Future, released Thursday.

The city already has a model for the bonds in the NYC Kids Rise Save for College program, which sets up kindergartners with $100 in Section 529 tax-advantaged college savings accounts. “But the baby bonds program can be even more impactful by starting at birth, applying to all families below a certain income, higher seed funding, and even matching funds for family contributions,” she said.

The city plans to earmark $15 million annually through 2025.

De Blasio launched the 529 program in a Queens school district in 2016. Children in this district now have more than $6 million for college and career training.

In Connecticut, the treasurer’s office will manage the accounts and upon each child’s birth, set aside funds in a trust.

When a beneficiary is between ages 18 and 30 and completes a financial education requirement, funds will be available for targeted eligible purposes consistent with research to close the racial wealth gap, including educational expenses, an in-state home purchase or a contribution toward retirement savings.

“The interesting thing to me about the Connecticut baby bond program is that it is structured to address the concerns that many have about these programs,” said Joseph Krist, publisher of Muni Credit News.

“By linking enrollment to being on Medicaid at birth, it becomes more of an objectively structured program. By using Medicaid as the primary qualification, it takes race and ethnicity out of the program even though it is actually targeted at babies of color.

“Helping out some 15,000 plus children annually is a hard thing to argue against if it’s based on poverty and income rather than more subjective criteria.”

While the future birth rate for those who would be eligible is a variable, the average birth rate of individuals Husky covered from 2012-2019 is 15,861. If Treasury officials use this estimation, the allocation for each beneficiary would be roughly $3,200.

If Treasury assumes a 6.9% rate of return, each account would grow to about $10,635 after 18 years, the earliest a beneficiary could receive the funds.

“It goes into an interest-bearing account,” Blumenthal said. “It has to stay there. They can’t touch it. You want to take a vacation? No. You want to buy a car? No.”

Connecticut has long been a study in contrasts. While research firm CreditSights pegged its per-capita personal income at 134% of the nation’s in 2020, its cities have long struggled.

Capital Hartford, for instance, had to strike a deal in 2018 for the state to assume its debt payments, up to $40 million annually stretched out over two decades.

In a positive development for the state’s cities, Moody’s Investors Service revised its outlook on 146,000-population Bridgeport’s Baa1 rating to positive from stable in advance of its planned $59.6 million general obligation bond sale on July 20.

In addition, a new state bill will boost funding for cities under a payment in lieu of taxes, or PILOT, program that establishes a tiered method for determining the annual state grant for tax-exempt property.

Lamont on June 23 signed the $46.3 billion biennial budget bill for fiscal 2022 and 2023, which relies on about $2.283 billion from the federal government through the American Rescue Plan COVID-19 relief package. Lawmakers have yet to allocate $400 million of the aid.

“Connecticut baby bonds is an anti-generational poverty bill, a racial equity bill and an economic growth bill all in one,” said Wooden, treasurer since January 2019 and a former Hartford City Council president.

The advocacy group Connecticut Voices for Children found that the state’s racial income gap is the greatest been since the 1980s, with racial wealth disparities are even worse.

A report by the organization in April found that more than half the state’s households with children reported an income drop the pandemic began.

According to Washington University in St. Louis, parents of newborns with child development accounts respond by deepening their commitment to the child’s higher education and their own efforts to save for that education.

Consulting firm McKinsey & Co. said the failure to close the racial wealth gap will cost the U.S. economy between $1 and $1.5 trillion, or 4% to 6% of the gross domestic product.

“The widening racial wealth gap disadvantages Black families, individuals, and communities and limits Black citizens’ economic power and prospects, and the effects are cyclical,” McKinsey said. “Such a gap contributes to intergenerational economic precariousness: almost 70% of middle-class Black children are likely to fall out of the middle class as adults.”

In addition, a report by Citi said not closing racial gaps has cost the U.S. economy up to $16 trillion over the past 20 years.

Pennsylvania’s new treasurer, Stacy Garrity, has used Groundhog Day, Valentine’s Day and Independence Day to reunite state residents with unclaimed money. And on Twitter, she has promoted “Made in PA Mondays” to promote Pennsylvania-based artists, businesses and manufacturers.

“We all live in Hartford, which I represent, or Bridgeport and New Haven. We live in eastern Connecticut. We live in the Naugatuck Valley,” he said. “The reason this had bipartisan support, folks: poverty doesn’t know a ZIP code. Poverty exists across the state.