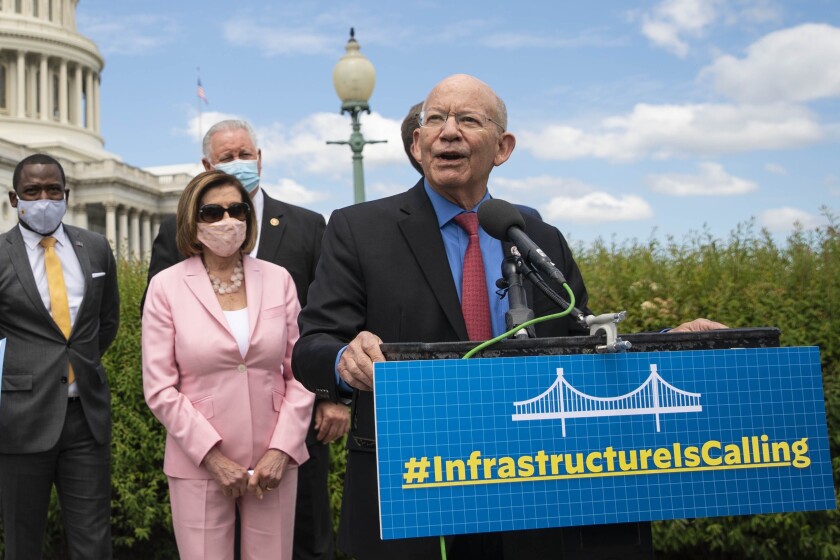 The House Transportation and Infrastructure Committee approved 38-26 a $547 billion surface transportation bill early Thursday with the support of only two Republicans.

Ways and Means also has jurisdiction over tax law changes that involve tax-exempt debt financing such as advance refunding and private activity bonds as well as taxable direct-pay bonds.

The committee-approved bill is expected to be folded into a larger infrastructure package but could be amended and passed as standalone legislation if President Biden is successful in negotiating a deal with Senate Republicans.

Biden earlier this week broke off talks with Republican Sen. Shelley Moore Capito of West Virginia who was representing her chamber’s Republican leadership.

Biden is now negotiating with a bipartisan group of Senate moderates who include Republican Sen. Bill Cassidy of Louisiana, one of his party’s leading advocates for tax-exempt bond financing for infrastructure projects.

Should those negotiations fail, House and Senate Democrats are expected to pursue their own infrastructure legislation using a parliamentary procedure known as budget reconciliation. Reconciliation would allow the package to pass in the Senate with a simple majority that potentially would include a tie breaking vote by Vice President Kamala Harris.

The House surface transportation bill, known as the Invest in America Act, includes numerous bipartisan amendments approved during a marathon markup that began Wednesday morning and ended around 5 a.m. Thursday.

Transportation and Infrastructure Committee Chairman Peter DeFazio, D-Ore., is lobbying the House Democratic leadership to bring a floor vote under regular order and not under the reconciliation process.

DeFazio said his goal is to have a House-Senate bipartisan conference committee decide on the final bill.

The House bill includes $343 billion for roads, bridges and safety, another $109 billion for transit and $95 billion for freight and passenger rail.

The Senate Environment and Public Works Committee last month unanimously approved the Surface Transportation Reauthorization Act of 2021, S. 1931, for roads, bridges and safety that totals $304.5 billion. The Senate bill does not include transit, passenger rail or rail freight because they are in the jurisdiction of other committees that have not yet acted.

The full Senate has, however, passed by 89-2 the $35 billion Drinking Water and Wastewater Infrastructure Act of 2021.

The House version of the water bill is for $50 billion and passed the House Transportation and Infrastructure Committee in the early part of the 19-hour markup.

Many Republicans objected to the $50 billion proposal as too expensive, but it passed the committee by 42-25 with a handful of Republicans in support.

The Water Quality Protection and Job Creation Act of 2021includes $40 billion for the Clean Water State Revolving Fund, which Congress has not reauthorized since 1987.

Democrats on the committee pointed out that the water bill is supported by more than 110 organizations ranging from environmental organizations to labor groups and the U.S. Chamber of Commerce.

DeFazio said the water bill addresses climate change and will help sewer plants reduce the emission of methane, which he described as “CO2 on steroids.”

The chairman pointed to one New Jersey community where methane from a sewer plant is being converted into electricity that not only powers that plant but is also sold to a utility.

“It’s time that we have 21st Century solutions to 21st Century problems,” DeFazio said. “And wastewater is a huge problem.”

The surface transportation piece approved by the House committee involves a reauthorization of the 2015 Fixing America’s Surface Transportation Act.

The five-year FAST Act, as it is known, was given a one-year extension through Sept. 30 of this year when the Trump administration failed last year to deliver on its promise of major infrastructure legislation.