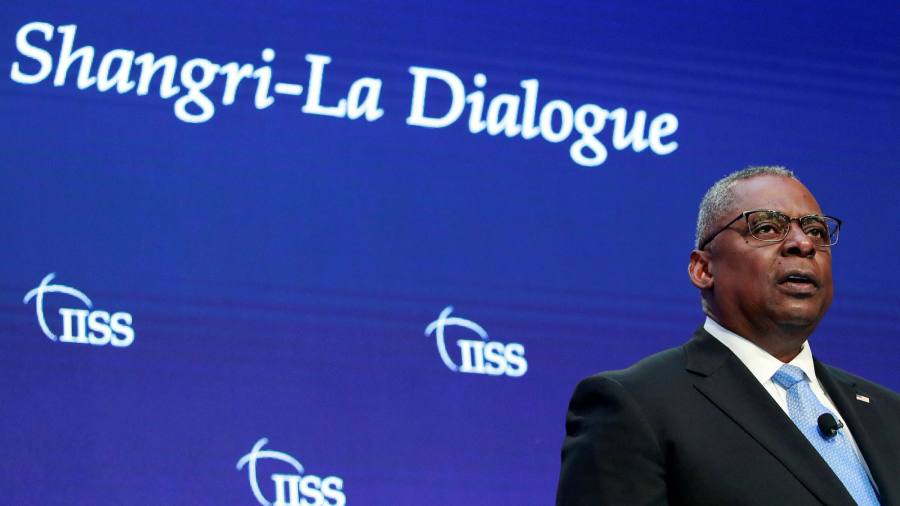 US defence secretary Lloyd Austin accused China of stepping up coercive behaviour towards Taiwan as he stressed that Washington would maintain its military capacity to resist any force that threatened the country.

Speaking at the IISS Shangri-La Dialogue defence forum in Singapore, Austin said China was engaging in provocative behaviour across the Indo-Pacific region that ranged from dangerous naval and aerial manoeuvres to increasingly assertive military activity around Taiwan.

“We’ve witnessed a steady increase in provocative and destabilising military activity near Taiwan,” Austin said on Saturday. “That includes PLA aircraft flying near Taiwan in record numbers in recent months.

Addressing an audience that included General Wei Fenghe, China’s defence minister, Austin said there had been an “alarming increase” in unsafe aerial intercepts and confrontations at sea by Chinese military ships and aircraft.

Austin referred to recent incidents in which Chinese air force fighter jets conducted “dangerous intercepts” in the South China Sea and East China Sea of aircraft flown by US allies — in a reference to Australia and Canada.

Speaking several weeks after President Joe Biden said in Tokyo that the US would intervene militarily to defend Taiwan from any Chinese attack, Austin said Washington would adhere to the Taiwan Relations Act by ensuring that Taiwan maintained a sufficient defence capability.

“And it means maintaining our own capacity to resist any use of force or other forms of coercion that would jeopardise the security or the social or economic system of the people of Taiwan,” he added.

Austin stressed that US policy towards Taiwan had not changed and that the administration remained opposed to any unilateral changes to the status quo across the Taiwan Strait — from Taipei or Beijing.

His comments came as US officials have grown increasingly worried about the Chinese threat to Taiwan, over which China claims sovereignty.

Austin used his speech to highlight the Biden administration’s efforts to boost co-operation with allies, including the Quad — a security group that includes the US, Japan, Australia and India — and the Aukus security pact agreed by the US, UK and Australia last year.

Paul Haenle, director of Carnegie China, a think-tank, said Austin’s speech “struck the right balance”, noting that the US defence secretary said US policy towards Taiwan had not changed while “stressing that key components of that policy are helping Taiwan maintain a sufficient self-defence capability and maintain a robust US capacity to resist any Chinese use of force”.

Austin spoke one day after meeting Wei, in what was the first senior-level meeting between the militaries since Biden assumed office.

Despite putting a positive spin on the meeting between the defence chiefs, China launched a blistering riposte to Austin’s speech.

“The US has already messed up Europe and the Middle East, do they now also want to mess up Asia? We will absolutely not allow that,” said Lieutenant General Zhang Zhenzhong, deputy chief of the Joint Staff Department of China’s Central Military Commission.

In what the Chinese delegation called Beijing’s official response to Austin, Zhang rejected the US defence secretary’s pledge that Washington was not seeking a new cold war, an Asian Nato or a region split into hostile blocs.

“Their words do not match their deeds,” Zhang said. “The true intention of the US is to use this to maintain their hegemonic system. They are trying to create small circles by roping in some countries.” He added that the US Indo-Pacific strategy was one of geopolitical rivalry and bloc competition.

Pointing to the Global Security Initiative, a still-vague security concept proposed by President Xi Jinping in April, Zhang said China was a “sustained contributor to and firm supporter of regional peace” and a provider of public goods, in contrast with the US, which he called the “biggest source of instability” and a “backstage manipulator”.

Zhang also warned Washington against further support for Taiwan. The US had “seriously hollowed out and undermined” its pledge to stick to a one-China policy, he said, pointing to Washington’s approval on Wednesday of the sale of $120mn worth of spare parts for warships to Taipei.

Steps taken by the US in the past year were a reminder that Taiwan was the one issue with the biggest potential to lead the geopolitical rivals into conflict, Zhang said, adding: “This is extremely dangerous.”

Wei is scheduled to address the Shangri-La Dialogue on Sunday morning.

Major General Guo Ruobing, commander of the National Security College at the National Defence University, sharply dismissed Austin’s criticism of Chinese intercepts of Australian and Canadian military aircraft. “They are the ones disturbing stability,” he said, adding that “the US always says one thing but does another”. Washington has repeatedly rejected such Chinese criticism by pointing out that its aircraft fly in international airspace.

Austin outlined three areas where the US was working more closely with allies, including sharing research and development to ensure they had the right capabilities to deter aggression and stepping up exercises and training.

He added that the US Coast Guard was boosting its presence in the Indo-Pacific, a shift illustrated by the fact that Admiral Linda Fagan was the first Coast Guard commandant to attend the Shangri-La Dialogue.