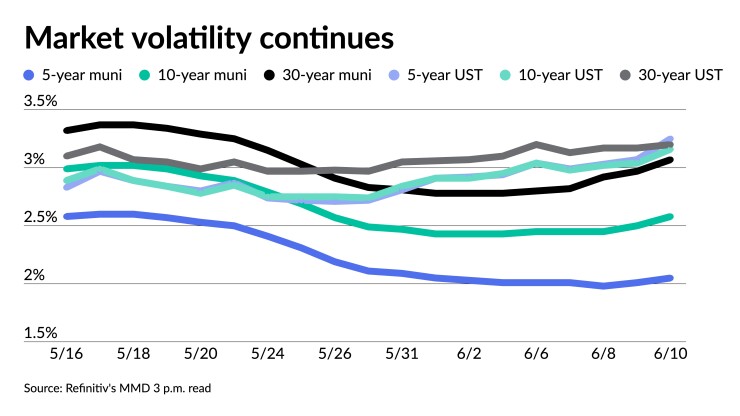 Municipals saw yields rise across the curve, with the largest losses out long to end the week, while a higher-than-expected inflation report led to a massive U.S. Treasury selloff on the front of the curve and sent equities tumbling.

With Friday’s Consumer Price Index report, the “prospects for a quick slowdown in the rate of inflation have faded,” said Gary Pzegeo, head of fixed income at CIBC Private Wealth US.

He said the Fed will likely hike interest rates by 50 basis points and “provide forward guidance for a more rapid move toward and above neutral than previously expected.”

“Persistent inflation in the services sector could lead the Fed to anticipate a need for a higher endpoint in the policy rate,” Pzegeo said. “Markets have already moved to discount a 3% Fed Funds rate by the end of 2022 and the Fed will likely show a similar sentiment in their updated Dot Plot.”

USTs saw the two-year climb quarter point to close at 3.062%, the highest since 2008, and the CPI news moved the three-, five- and seven-year well above the 10- and the 30-year. Municipal secondary trading showed weaker prints with a heavy concentration of trading on the short end, but triple-A yields were cut four to 10 basis points two years and out with the larger moves higher out long.

After Friday’s “surprisingly strong CPI print,” which saw inflation hit a 40-year high, investor focus will shift to next week’s FOMC meeting, according to Barclays PLC.

Coupled with last week’s robust payrolls, Barclays strategists Mikhail Foux, Clare Pickering and Mayur Patel said, “it is fair to assume that the Fed will remain quite aggressive on its tightening path as the labor market is cooling off a bit and inflation remains stubbornly high.”

On the muni-front, tax-exempts “have finally caught up to the UST selloff and their rally lost its steam, with profit-takers emerging in droves,” they noted.

“Muni ratios have been steadily moving up over the course of the week” and could go even higher, they said. While “recent wides in both ratio and yield terms are unlikely to be re-tested near-term,” they are cautious at this point.

Yield curves, Barclays strategists noted, “have been steepening, with the 20-30y part of the curve underperforming the most.”

“Aside from the COVID-19 selloff in 2020 and the subsequent market recovery,” they said, “the current slope of the 10s30s curve is at the steepest point since late 2014.”

By the end of the summer or early fall, they expect “the 10s30s curves should be much flatter than now.”

High-yield names have also underperformed their high-grade counterparts, “with the stars of the rally,” such as Puerto Rico, tobacco and other liquid high-yield benchmarks, “fading and giving back some of their recent gains,” they said.

Investors will be greeted Monday with a drop in supply with the new-issue calendar estimated at $2.880 billion in $2.028 billion of negotiated deals and $852.6 million of competitive loans.

Treasuries sold off on the front end.

“We are being told the economy is great, there’s tons of jobs and the inflation is only in food and gas (spoiler alert it is not) there appears to be a disconnect between what every day people are seeing and what is being put out officially,” he said. “Until the Fed gets more serious (and it will have to more aggressive, the longer this goes because it just keeps getting worse) and without effective policy measures from Washington as in a 180 degree change in energy policy this will just continue.”

“The numbers are catastrophically bad for Americans and the policymakers in Washington,” said Nancy Tengler, CEO and CIO at Laffer Tengler Investments. “So many expected the year-over-year CPI to decline instead we can in at 8.6% versus expectations of 8.3%,” she said.

“As we have been arguing this is sticky, persistent inflation that will take years to work out of the system,” she added.

And while food and energy play a large role in keeping CPI elevated here, Hugh Nickola, head of fixed income at GenTrust concurs that “inflation is proving more sticky than the market expected.”

However, he said this number doesn’t change his view that core inflation will drop meaningfully over the remainder of the year. He noted that the market is pricing in “a slightly more aggressive Fed based on this print, however, longer-term rates are moving slightly lower.”

“If the Fed had any doubt about the need for additional substantial rate hikes, they should be dispelled by this report,” said Ron Temple, head of U.S. equities at Lazard Asset Management.

“Accelerating shelter inflation, in particular, should raise a bright red flag. Housing is the single largest expense for consumers … and as home purchase prices have rocketed, renters have little choice other than to accept steep rent increases. Consumers know these cost increases will not reverse, fueling demands for higher wages to make ends meet,” he said.

“With labor markets the tightest in decades, employers have little choice other than to raise compensation, which in turn contributes to increasing services inflation,” Temple added. “The Fed faces a mighty challenge breaking this potential wage-price spiral.”

Despite this, Tengler believes “the consumer is still in decent shape though excess savings are being depleted.”

“People are working. Wages have risen though real DPI has declined close to the pandemic lows but still above 2019. The consumer cannot stay resilient forever obviously,” she said. ”But they were strong going into this debacle and we think will continue to surprise some with their resilience.”