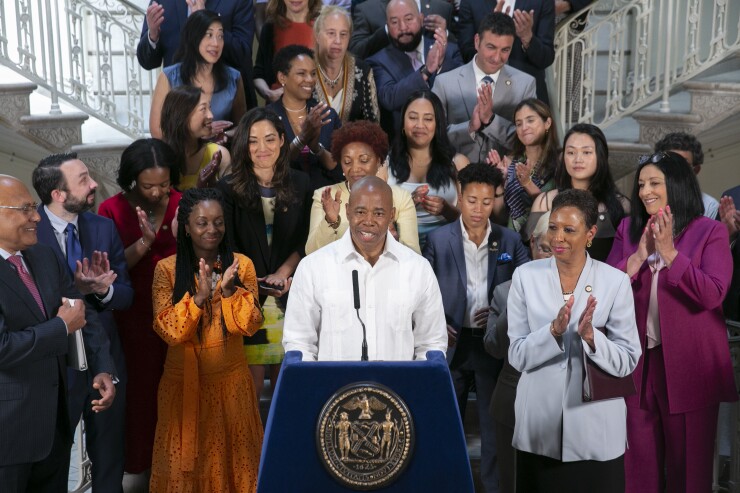 New York City has an early budget for the new fiscal year, one that totals a record high $101 billion for fiscal 2023 and includes a record level of $8.3 billion in reserves.

At a City Hall press conference Friday afternoon, Mayor Eric Adams, Council Speaker Adrienne Adams and Council Finance Chair Justin Brannan announced the “handshake agreement” on the balanced budget that was due before the start of the city’s fiscal year on July 1. The full City Council will vote on the deal in the next few days.

“So we are able to announce an early budget,” the mayor said. “This was something that we were able to do early because we came to the table with the idea of how to we get to ‘Yes’ not at how do we stay at ‘No.’ We focused on the basics — building reserves, responsible planning and cautious management.”

“At the same time, we are protecting New Yorkers from the unexpected and building on the fiscally responsible approach our administration has taken throughout the budget process by increasing reserves to the highest level in city history.”

A record level of Wall Street activity has driven up personal income taxes to higher-than-expected levels, allowing the city to revise its forecast up from the executive budget’s estimate by about $3 billion for fiscal 2022 and around $1.5 billion for fiscal 2023. These added revenues allowed the city to increase reserves while decreasing the fiscal 2023 budget gap by prepaying expenses.

Separately, nearly $3 billion was added to the Labor Reserve over the financial plan in anticipation of negotiating labor agreements with the entire union-represented workforce. In total, the Labor Reserve has been replenished by about $4.7 billion in the budget cycle.

“Reserves will be critical to maintaining ratings as equity markets continue to be negative and recession is more probable,” John Hallacy, founder of John Hallacy Consulting LLC, told The Bond Buyer. “Quarterly modifications may be more necessary than ever. The spending priorities may come under pressure. In the meantime, the economy is steady but not immune.”

“This budget takes some good steps forward, but of course much work remains,” City Comptroller Brad Lander said in a statement. “The mayor and the Council are depositing an additional $1.5 billion in the city’s long-term reserves (the Revenue Stabilization Fund and Retiree Health Benefits Trust), below the $1.8 billion we recommended, but still a substantial amount,” he said.

Lander noted the city has started to see some signs of recovery, including increased subway ridership and a rebounding tourism sector, But he stressed there were also reasons for caution.

“We must be adequately prepared to protect essential services and the most vulnerable in an economic storm,” he said. “Going forward, the city should adopt a set formula to guarantee annual deposits and establish rules for withdrawals to guard against devastating cuts in a potential recession, which could be on the horizon sooner than we would hope.”

“The city should consider how it funds reserves on an ongoing basis, so it continues to set aside funds in good times in preparation for more difficult years,” DiNapoli said. “My office will release a review of the fiscal 2023 adopted budget and the accompanying financial plan in the coming weeks.”

New York City is one of the biggest issuers of municipal bonds in the nation. As of the first quarter of fiscal 2022, the city had about $38.13 billion of general obligation bonds outstanding.

In May, Fitch Ratings revised the outlook on the city’s AA-minus rated GOs to positive from stable, citing improved revenue performance as the city sees a recovery from the COVID-19 pandemic.

The city’s GOs were also affirmed in May at Aa2 by Moody’s Investors Service, AA by S&P Global Ratings and AA-plus by Kroll Bond Rating Agency. They all assign stable outlooks to the credit.

The administration and Council was also able to secure the first expansion of the New York City and State Earned Income Tax Credit in 20 years, with $250 million in fiscal 2023, and provided 600,000 residents with a $90 million property tax rebate.