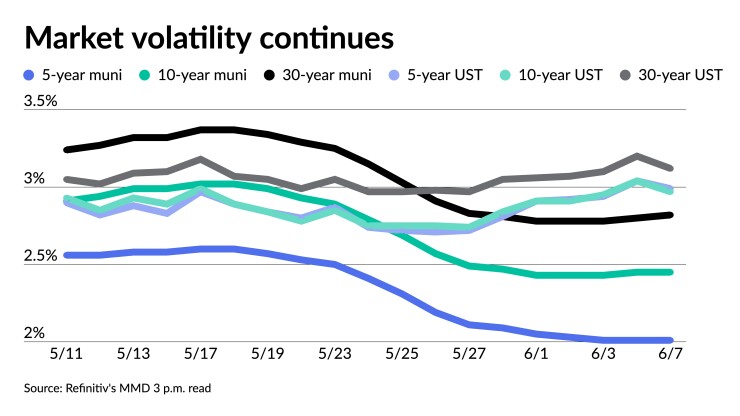 Municipals again saw a stronger short end of the yield curve and some pressure out long in light trading Tuesday as U.S. Treasuries were better and equities ended in the black.

Munis are relatively cheap versus USTs and on an absolute basis.

“Most important, supply and demand is expected to show a negative imbalance of -$33 billion for the summer, they said. “Reinvestment money is historically outsized during summer months, while new issuance is typically undersized.”

They noted that for 10-year triple-A munis have more than doubled from one year ago, and it seems that USTs may be settling into a new range after reaching as high as 110% in mid-May.

“Elevated ratios are often short-lived, but can offer compelling relative and absolute value,” they said. “We have seen that rebound recently, with ratios now at approximately 90%. Municipal yields also dropped by almost 40 basis points on average in May, suggesting that this window may be closing.”

Muni-UST ratios are around 20 ratios lower in the last two weeks, “reversing almost all of prior 2022 underperformance,” said Matt Fabian, a partner at Municipal Market Analytics.

“The nominal spread between 10-year muni taxable, which will more closely track Treasuries, and tax-exempt offered-side benchmarks is now its widest at +141 basis points in at least four years,” he said.

In large part, this is due to the “product scarcity amid two weeks of strong June reinvestment buying and last week’s mutual fund inflows,” he said.

He noted that “net supply dropped to $6.5 billion or roughly half its weekly average since March 1.”

“Secondary net supply will be even worse as the main supplier of such this year — the mutual funds raising cash for outflows — are now a buyer, which suggests that, at least for now, secondary supply will either be via very short-term gains takers or scarce,” he said.

Looking ahead, he said, “positive momentum is considerable and scarcity still reigns: two large reinvestment months lie ahead and both new-money and refunding issuance are apt to underwhelm.”

The state is also set to sell $303.040 million of general obligation bonds state and local facilities loan of 2022, First Series A Bidding Group 3, at 11 a.m. Wednesday.

The state is additionally set to sell is set to sell $261.780 million of general obligation bonds state and local facilities loan of 2022, First Series A Bidding Group 2, at 10:30 a.m Wednesday.

The state is set to sell $150 million of taxable general obligation bonds state and local facilities loan of 2022, First Series B, at 11:30 a.m. eastern Wednesday, as well.

Robots could surpass workers at Amazon by 2030, Cathie Wood says
MSRB discusses transparency proposals at quarterly meeting
Mortgage rates drop to the 5% range for the first time since September
Hackers take over Azuki’s Twitter account, steal over $750K in less than 30 minutes
Nashville Estate Loved By Country Music Celebrities Is Up For Absolute Auction