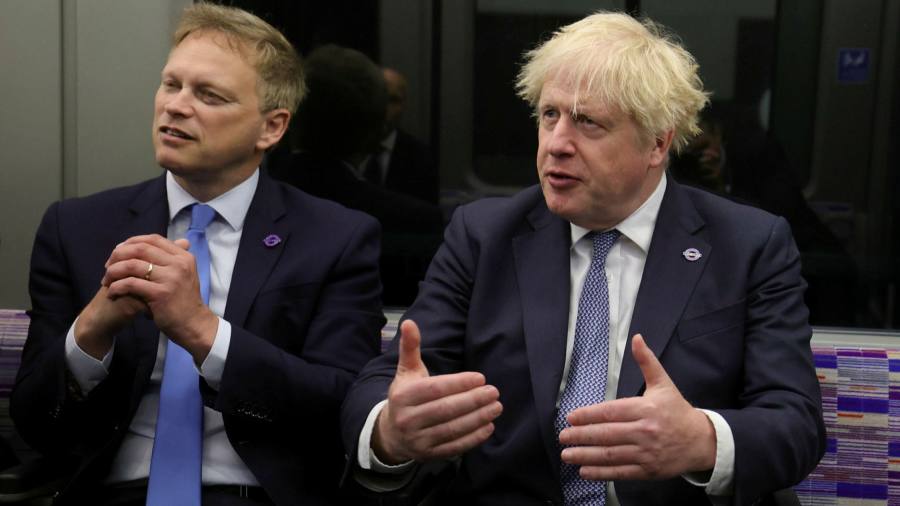 Boris Johnson’s key allies are preparing to defend him in a challenge to his leadership, as they conceded it was increasingly likely that rebel Conservative MPs had reached the key threshold needed to trigger a vote of no confidence in the UK prime minister this week.

For such a vote to take place, Sir Graham Brady, chair of the influential 1922 committee of backbench Tory MPs, must receive 54 letters calling for Johnson to go.

Allies of the prime minister said the threshold may have been reached following claims by a number of rebels on Sunday they had enough support to trigger a ballot.

One close ministerial ally of Johnson dismissed a report in the Sunday Times that the figure was as high as 67. “I’m confident it’s not 67. But whether it’s over 54 is another matter,” he said.

One leading critic of Johnson predicted there was a 55 per cent chance of a confidence vote this week. “He is on the skids,” the MP said.

Tory MPs have been taking soundings from their constituents and local party associations about Johnson’s future over the long Jubilee bank holiday.

“I think Brady will announce tomorrow and if he doesn’t, others will put letters in. It’s past the point of no return,” another influential Conservative MP predicted on Sunday. He noted that some Tories want to physically hand a letter in instead of using email or WhatsApp.

Brady, who declined to comment, is the only person who knows exactly how many MPs have submitted no-confidence letters.

But Grant Shapps, transport secretary and one of Johnson’s key parliamentary organisers, told the BBC he did not believe there was enough support in his party for a ballot on Johnson’s leadership to be called in the coming days.

Shapps, who was instrumental in aiding Johnson’s campaign for the Tory party leadership in 2019 and helped shore up his faltering position earlier this year, said he was also confident that the prime minister could survive any vote. When asked if he would win any ballot, Shapps replied: “Yes he will.”

At least 30 Tory MPs have publicly called on Johnson to quit as discontent has grown over the partygate scandal following the publication of a highly critical report by senior civil servant Sue Gray in which she questioned his leadership.

But some ministers close to Johnson think that the number of rebels have been exaggerated. One ally predicted “an entire week of mea culpa” following reports of an imminent no-confidence vote. Another said, “I’ve heard the wolf cry too many times.”

Should Johnson avoid a vote in the coming days, the focus will switch to the results of two crucial by-elections on June 23. The rebels believe that losing both would make a no-confidence vote inevitable.

Johnson’s challenge in Wakefield was highlighted by a new poll that suggested the Labour party was on course to take back the seat, which went Conservative for the first time at the last election since 1931. On Sunday, JL Partners put Labour 20 points ahead of the Tories.

In Tiverton and Honiton, a Tory stronghold with a 24,239 majority, the bookmakers have installed the Liberal Democrats as odds-on favourites to win.

The prime minister will attempt to shift the focus on to domestic policy with a speech on Tuesday on housing, including plans to extend the right to buy to housing association tenants. Johnson will also continue work on a growth strategy ahead of a joint speech on the economy with chancellor Rishi Sunak.

Meanwhile Jeremy Hunt, former foreign secretary, is being urged by his supporters to announce that he will stand for the Conservative party leadership if Johnson loses a leadership ballot or is forced out.