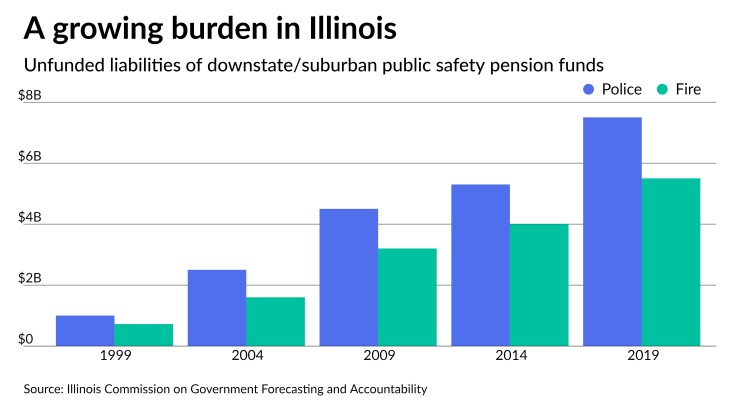 The increased willingness to abide by the 2019 law comes after Kane County Circuit Court Robert K. Villa rejected arguments that the consolidation of more than 600 local government police and firefighter funds outside Chicago violated the state’s pension clause that protects benefits from being diminished or impaired.

The case is facing its next legal test as the group of local police funds behind the 2021 lawsuit filed an appeal of Villa’s decision Wednesday, although no arguments have yet been laid out. The losing side was expected to appeal, and the case is expected to eventually land before the Illinois Supreme Court.

“While the case plays out in court, the staff of the Illinois Police Officers’ Pension Investment (IPOPIF) continues to work with local Article 3 pension plans to move their assets to the consolidated fund,” the fund said in a statement Thursday. “In fact, since the ruling in favor of the defendants, we have been fielding numerous inquiries from local plans who now wish to start the process of transferring investment assets.”

“We expect those numbers to more than double by the end of June,” the fund said. Nearly $10 billion of assets are managed by local police funds that eventually would be subject to the consolidation laid out in Public Act 101-0610.

In contrast, the new Firefighters’ Pension Investment Fund reports 90% of local funds have completed the transfer process. The firefighters’ fund had more widespread support among local systems when the legislation was being debated while some police funds and pension associations opposed it.

The fire fund said it had hoped Villa’s ruling would put the challenge to rest as it carries some cost.

“Although FPIF has been able to manage a cost-effective, efficient transition process, the litigation has resulted in unexpected costs to FPIF, which will ultimately be borne by the local pension funds,” the fund said in a statement. The fund expects more than $25 million in annual fee savings alone from the consolidation.

Gov. J.B. Pritzker won legislative approval in November 2019 to require the more than 600 local government police and firefighter funds with the exception of Chicago to transfer their assets to a single consolidated police fund and a single fire fund by July 1.

The plan has modest fiscal goals such as reducing administrative costs and raising investment returns, but rating agencies considered it a positive credit step because municipal budgets are strained by rising payment demands that have forced some to raise taxes, cut services, issue pension obligation bonds, and sell off assets. It also represented one of the rare actions taken by the state to help local governments on the pension front.

While benefits would continue to be managed by local boards, some police funds and their advocacy organizations resisted the change and a group of police funds early last year sued, arguing the mandated consolidation equates to a benefit cut.

In Arlington Heights Police Pension Fund et al v. Jay Robert Pritzker et al, the plaintiffs represented by Konicek & Dillon argued that benefits are damaged because the law “strips plaintiffs of their autonomy and their authority.”

The court sided with the state in his long-awaited opinion distributed last Wednesday.

“In this case, the court finds that it cannot extend the term ‘benefits’ beyond the reach of prior Illinois Supreme Court cases (that this Court is aware of) to find the challenged legislation unconstitutional against the Pension Clause’s protections,” Villa wrote.

Villa said prior high court opinions have considered “benefits” as those that “directly affect the value of a plaintiff’s pension benefit.”

The lawsuit also had argued that the legislation violates the constitution’s takings clause by taking or damaging plaintiff’s property without just compensation because the transition costs are being covered by loans through the Illinois Finance Authority which must be repaid by the consolidated funds. Villa also rejected that argument saying “there are no allegations or evidence presented that plaintiffs currently drawing their pension benefit have suffered a present or will suffer a future loss in benefit payment.”

“We’re pleased with the Circuit Court’s ruling, and we’ll continue to defend the statute on appeal,” AG spokeswoman Jamey Dunn-Thomason said in an email Friday.

While the police fund will miss the deadline, it’s a symbolic marker as there are no punitive actions levied.

The unfunded liabilities of Illinois’ suburban and downstate public safety pensions rose to $13 billion in the last year of compiled results reported to the state, soaring over a 29-year climb that underscores the deep strains on local government budgets.

Police accounted for $7.5 billion of the total and firefighters for $5.5 billion, according to the most recent report from the state legislature’s Commission on Government Forecasting and Accountability.