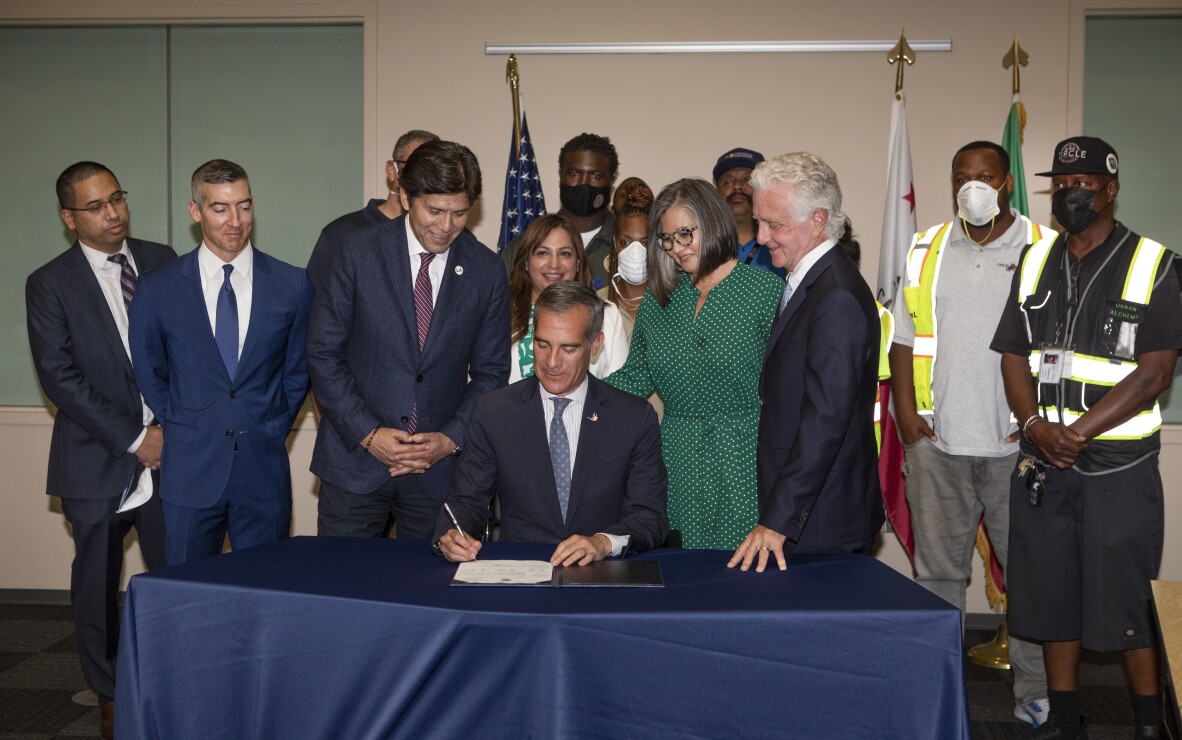 Caruso was leading with 24% of likely voters’ support, trailed by Bass with 23% and City Councilmember Kevin de Leon at a distant third with 6%, in a poll released in April that was conducted by the University of California, Berkeley Institute of Government Studies for the Los Angeles Times. The top two vote-getters proceed to a November general election, unless a candidate wins an outright majority.

This year’s budget signing — with reserves at $452.19 million or 6.03% of 2021-22 general fund revenues and revenues through April coming in $2.1 million ahead of expectations – was anti-climactic, when compared to the early pandemic era budget of 2020 when Garcetti reported that April of a stark drop-off in revenues.

“This budget is both prudent and progressive; bold, but balanced,” said the termed-out Garcetti. “As mayor, I’ve always tried to make decisions that keep an eye toward the future, and this budget is proof that we can make historic investments today, while creating our most fiscally responsible budget yet.”

Garcetti highlighted during the signing ceremony plans to spend $415 million from Proposition HHH, a $1.2 billion bond measure approved by voters in 2016 to build more housing to alleviate the homelessness crisis. The $1.16 billion fiscal 2022-23 budget allocates $200 million from the general fund for homelessness and the Proposition HHH funds are expected to help construct and develop 98 projects with 6,194 units. It will also tap $255 million in state Project Homekey funding for 928 units.

The city plans to issue $389 million of general obligation bonds in the fall that will include Proposition HHH taxable and tax exempt GOs authorized by the city’s 2004 Proposition O clean water bond measure, according to the city administrative officer’s bond calendar. The amounts for each haven’t been set.

“As chair of the Homelessness & Poverty Committee, I’m very proud that this budget includes significant investments on homelessness, which will keep us on a path to getting Angelenos permanently housed,” said de Leon.

City Administrative Officer Matt Szabo did warn in the year-end financial status report released Friday that though the “city continues to regain its financial footing” it has diminished flexibility and there could be potential future challenges related to inflation. He also cautioned city leaders from continuing to draw down reserves to support critical city programs, though the levels are currently above the city’s 5% reserve fund policy.

“We continue to recommend that the city take a cautious approach to using the reserve fund and refrain from using it to fund new programs, program expansions and service restorations at this time,” Szabo wrote.

As for the mayor’s race, Bass, who was said to be on the short list to be President Joe Biden’s vice president, saw a substantial early lead in the race last year eroded by Caruso.

Scandals that have rocked city hall have aided Caruso’s rise to top of the heap. They included an investigation into City Attorney Feuer’s handling of litigation from the Department of Water and Power’s billing fiasco. Paul Paradis, outside counsel hired in the case, pleaded guilty to bribery in a kickback scheme with opposing counsel. Though Feuer wasn’t directly linked, it raised questions about his management of outside counsel.

Meanwhile, Garcetti’s appointment as ambassador to India, which had been expected to send him to New Delhi before his term ends in December, has been held up as Republicans on the confirmation committee investigate what the mayor knew about his former chief of staff’s sexual harassment of city employees.