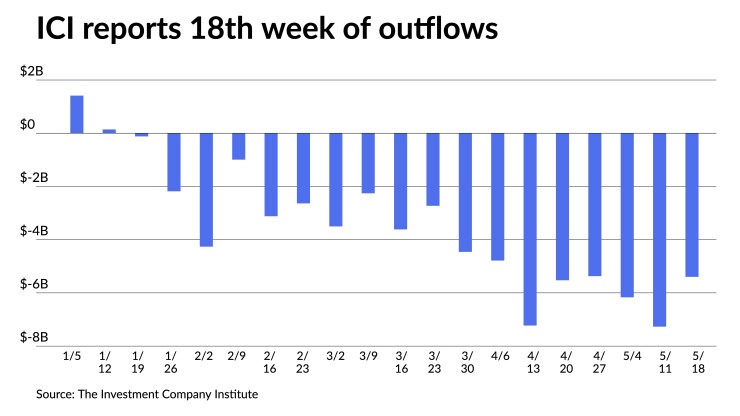 The Investment Company Institute reporting investors pulled $5.398 billion from muni bond mutual funds in the week ending May 18, down from $7.270 billion of outflows in the previous week, but marking the 18th consecutive week bringing ICI’s 2022 total figure to $70.1 billion. Refinitiv Lipper, which reports Thursday, has the total outflows for the year at $36.5 billion.

Exchange-traded funds saw another round of inflows at $901 million versus $1.756 billion of inflows the week prior, per ICI data.

“The combination of a risk-off theme giving new support to fixed-income and upcoming favorable seasonals for munis has given the market a new outlook,” she said. “Forthcoming fund flow data will shed light on exactly how deep the turnaround may be — a drop in outflow figures would add incentives for a wider rally.”

Muni spot yields, Olsan said, “have been held to a much tighter trading range than their UST counterparts.” Trading in the 5-year triple-A spot “has brought a range of 21 basis points,” which is “50% less active than the 5-year UST,” according to Olsan. The 10-year spot is in a similar pattern, “with the triple-A yield trading in range of 26 basis points.” In 20 years, she said, “the triple-A has matched UST trading within a 30 basis-point range.”

Muni-to-UST ratios “are often a driver to increasing demand among a broader buyer base,” Olsan noted. Short-term ratios this month are well above January’s sub-50% range at 80% and 90%. Intermediate high grades are also higher from the start of the year, with current levels above 100% (and with attractive requisite yields).

“The longer end of the curve brings a more nuanced advantage with a greater variety in coupon float,” Olsan said. “Long 4s have reached relative value over 125%/UST this month, while long-term 5s are trading with ratios around 110% (up from 75% in January).”

Buyer preferences, she noted, “appear to be shifting along the curve in recent sessions given the jump in yield and ratios.” In mid-May, “maturities inside eight years captured 35% of all secondary volume,” but after several firmer sessions, “this range has seen flows curtailed to around 25% of all trades,” Olsan said.

“In the 10-year range, trade flows have held steady over the last week, accounting for 20% of all volume,” she said. “Improving relative value and higher yields further out the curve have attracted more flows, where the share of volume increased in the secondary market to 56% from the prior week.”

The average seven-day simple yield for all tax-free and municipal money-market funds rose 0.06% to 0.42%.

No surprises in FOMC minutes
Federal Open Market Committee meeting minutes confirmed what officials have been saying: they expect half-point rate hikes at the next couple of meetings and they believe their communication has been effective.

“Many participants assessed that the Committee’s previous communications had been helpful in shifting market expectations regarding the policy outlook into better alignment with the Committee’s assessment and had contributed to the tightening of financial conditions,” the minutes said.

Balance-sheet reduction also had the support of members, the minutes noted. After balance sheet runoff is “well under way,” member said “it would be appropriate for the Committee to consider sales of agency [mortgage-backed securities] to enable suitable progress toward a longer-run SOMA portfolio composed primarily of Treasury securities.”

The economic outlook was termed “highly uncertain” by the FOMC and the minutes said “policy decisions should be data-dependent and focused on returning inflation to the Committee’s 2% goal while sustaining strong labor market conditions.”

Many panelists believe “expediting the removal of policy accommodation would leave the Committee well positioned later this year to assess the effects of policy firming and the extent to which economic developments warranted policy adjustments,” the minutes said.

Some members mentioned the difficulties caused by high inflation on consumers and that it “could impede the achievement of maximum employment on a sustained basis.”

Noting the meeting was three weeks ago, Ed Moya, senior market analyst at OANDA, said, the minutes “did give a glimmer of hope that they could adjust their policy tightening stance later in the year.”

The half-point hikes are necessary since “they are behind the curve with fighting inflation,” he said. “The Fed is optimistic about the economy, but they are growing concerned with markets for Treasuries and commodities.”

Saying the minutes were “as expected,” John Farawell, managing director of municipal underwriting at Roosevelt & Cross, said, “with inflation worries, supply chain issues and financial assets’ shaky performance it will be quite interesting to watch next month’s central bank’s move.”

Slowing growth and high inflation, he said, “obviously can signal a recession. Our Treasury market is now reinforcing this with a strong performance in the last week.”

The Fed offered no clues on the possibility of slower tightening or a higher terminal rate, said Ed Al-Hussainy, senior interest rates strategist at Columbia Threadneedle Investments. “I suspect we will have to wait until the Jackson Hole/September FOMC window for a more significant pivot, either towards a slower pace of tightening/pause or towards a higher terminal rate target.”

Markets are pricing in a 60% probability of a slowing to a quarter-point Fed hike in September, he noted, and a terminal rate near 3%, to be reached in the first quarter of next year. “This is an optimistic outlook that puts a lot of weight on the labor market and inflation slowing into yearend 2022,” Al-Hussainy said. “It is now relatively cheap to take the other side of this bet.”