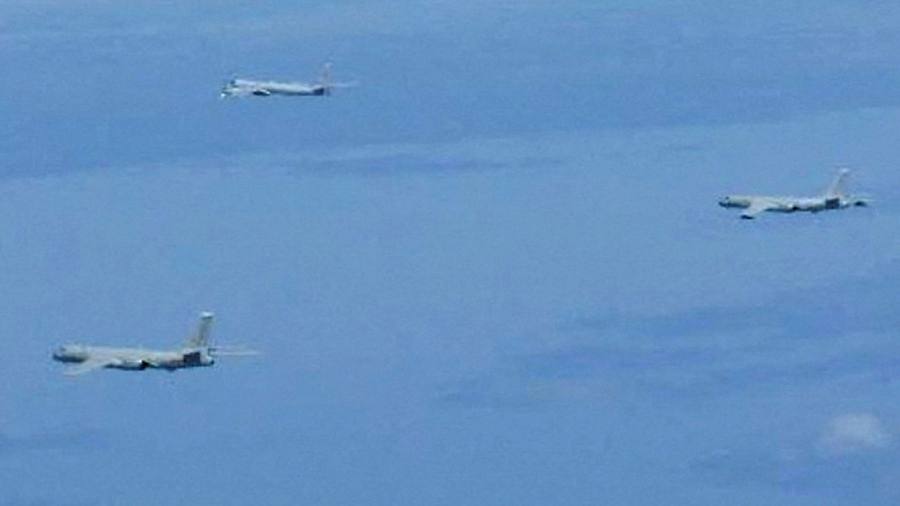 Chinese and Russian strategic bombers flew over the Sea of Japan as Joe Biden attended a Quad summit in Tokyo, in a joint exercise the Japanese government denounced as “unacceptable”.

The nuclear-capable bombers conducted a joint flight on Tuesday that began over the Sea of Japan as the US president was meeting his counterparts from Japan, Australia and India, Japanese and US officials said.

Moscow said the 13-hour flight was carried out “strictly in accordance with the provisions of international law” and was not directed against third countries. But Nobuo Kishi, Japan’s defence minister, condemned the exercise as “provocative” and “unacceptable”.

A US official said the exercise showed China was continuing military co-operation with Russia in the Indo-Pacific “even as Russia brutalises Ukraine”.

“It also shows that Russia will stand with China in the East and South China Seas, not with other Indo-Pacific states,” the official said.

Russia and China conducted joint nuclear bomber exercises over the Sea of Japan in 2019, 2020 and 2021, but Tuesday’s flight was the first time such a manoeuvre occurred with a US president in the region.

The exercises were held on the final day of Biden’s trip to Asia as he participated in a summit of the Quad — the security group of the US, Japan, Australia and India that China has criticised as an Asian “Nato”.

Chinese analysts have previously cited one purpose of the joint bomber patrols with Russia as warning the US against “stirring up trouble” with initiatives such as the Quad.

“The aircraft of both countries acted strictly in accordance with the provisions of international law,” the Russian ministry said. “There were no violations of the airspace of foreign states.”

The exercises were conducted as tensions mount over Taiwan, a democratic country over which China claims sovereignty. Over the past year, China has flown increasing large sorties of fighter jets and bombers close to Taiwan, in what US defence secretary Lloyd Austin has described as rehearsals for military action against the island.

Biden on Monday vowed to use military force to intervene if China attacked Taiwan. His comment appeared to overturn the US policy of “strategic ambiguity” in which Washington does not specify whether it would come to Taiwan’s defence.

Asked on Tuesday if his comments meant that “strategic ambiguity” was defunct, Biden said that “the policy has not changed at all”.

In another illustration of the rising concern about Taiwan, particularly in the wake of the war in Ukraine, Admiral Michael Studeman, the top intelligence officer at US Indo-Pacific Command, is visiting Taipei, where he met senior security officials, according to one person familiar with the situation.

Admiral John Aquilino, head of US Indo-Pacific Command, recently told the Financial Times that the invasion of Ukraine should be a reminder to not be complacent about Taiwan.

The joint Russian-Chinese bomber sortie is part of military co-operation that analysts said approached the level between allies, although both countries insist their relationship is not an alliance.

The US has become more vigilant about China-Russia relations since Xi Jinping and Vladimir Putin described their friendship as having “no limits” in February.

The US official said the latest exercises underscored the link between European and Indo-Pacific security and reinforced the need to bolster alliances and propel a vision for freedom shared by like-minded nations.

“The joint statement Putin and Xi released . . . advocated a world where, whether in eastern Europe or the western Pacific, China and Russia would have their own spheres of influence where it would be natural and acceptable to wield their power against their neighbours,” the official added. “They are working together to advance that vision.”

China’s foreign ministry did not immediately respond to a request for comment.

Video: Will China and the US go to war over Taiwan?
This article was originally published by Www.ft.com. Read the original article here.