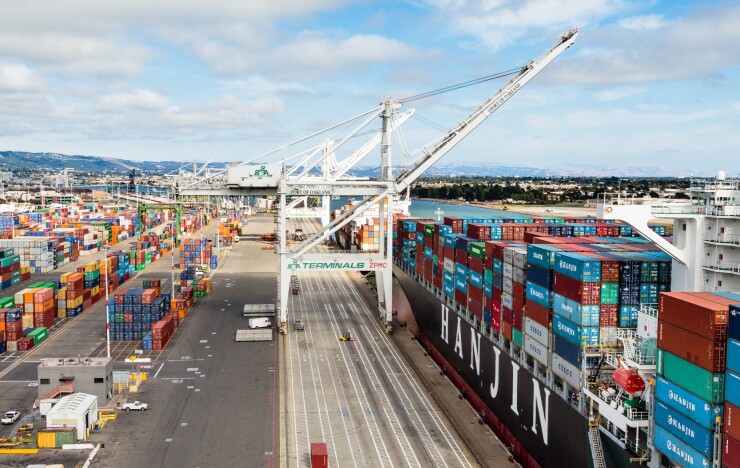 Factory and port shutdowns in China, the Port of Oakland’s largest trading partner, were a leading factor in a double-digit drop in cargo volume in April, port officials said.

“U.S. exports have been hampered by vessel schedules thrown into disarray in China,” Port of Oakland Maritime Director Bryan Brandes said in a statement. “Most of Oakland’s business depends on the Asia-U.S. trade route.”

In Oakland, cargo volume for the year through April fell by 7%, but the month experienced a much steeper year-over-year decline with containerized imports dropping 17% and exports falling 18% compared to the same month in 2021.

Other factors in the traffic decline cited by the port included supply chain issues that have resulted in a drop in the number of ships stopping in Oakland; importers taking their time retrieving shipments, crowding container yards and slowing discharge from ships; and a container shortage, which has made it harder to load export shipments.

On the plus side, congestion at the northern California port has cleared up significantly. During the peak of port congestion in 2021, as many as 30 ships were waiting to enter an Oakland berth. Today, the port said, container ships number from one to a few waiting to do business at the Port of Oakland.

The Oakland port expects traffic to accelerate, the port said, as Shanghai cargo activity has recently picked up.

In contrast, the Port of Los Angeles notched one of its busiest Aprils in history, according to POLA Executive Director Gene Seroka.

Traffic at the Los Angeles port was up 1% in April to 3.5 million twenty-foot equivalent units, or TEUs, compared to last year.

Ships are diverting away from Shanghai to other nearby ports such as Yangshan and Ningbo to keep goods flowing, Seroka said.

The Port of Long Beach, which saw traffic increase in April, is preparing for the possibility of a summertime surge as China recovers from the extended COVID-19 shutdown, Executive Director Mario Cordero said in a statement.