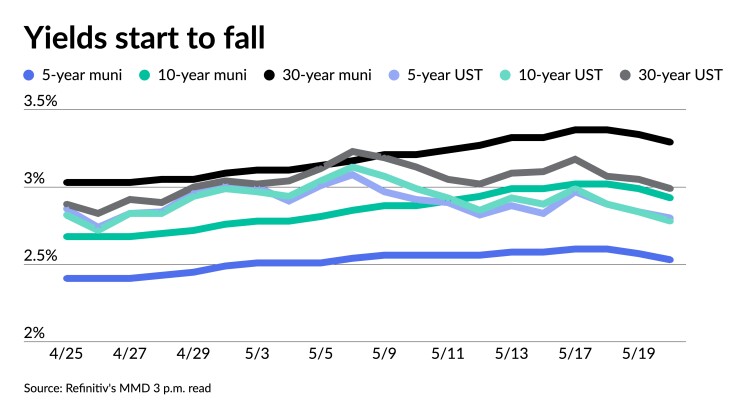 Municipals were better Friday after catching a bid in the secondary, finally following U.S. Treasuries in a flight-to-quality, while still underperforming, keeping valuations above 100% on the 10- and 30-year. Equities pared back earlier losses to end mixed after the S&P 500 dipped into bear market territory earlier in the session.

“The correlation between stocks and U.S. Treasuries is finally starting to normalize,” noted Barclays PLC in a weekly report. “Whereas the two were selling off or rebounding in sync amid higher inflation expectations and a hawkish Fed, over the past several weeks, the relationship has reverted to historical averages, with equities selling off in a risk-off environment while Treasuries rallied.”

Given that the volatility of risk assets looks set to remain high, “if the focus on the flight-to-safety increases, rates might remain in check, and all fixed-income assets could benefit as a result, including municipals,” Barclays strategists said.

Investors will be greeted Monday with a decrease in supply with the new-issue calendar estimated at $5.763 billion in $4.192 billion of negotiated deals and $1.570 billion of competitive loans.

The primary calendar is led by $1.075 billion of general obligation bonds from Connecticut. Other notable deals include $268 million from Katy Independent School District, Texas; $225 million from Tarrant County, Texas; and $209 million from the Metropolitan Washington Airports.

Gilt-edged Loudoun County, Virginia, is expected to sell $157 million to lead the competitive calendar, along with Fort Worth, Texas, with $150 million.

As Treasuries rallied, tax-exempts mostly moved in the opposite direction this week, with the exception of Friday. The intermediate sector and long end underperformed, Barclays PLC said in a weekly report.

The 30-year municipal to UST ratio touched 110%, which is the highest of the year and a level last reached in late October 2020 and August 2015 before that, Barclays strategists said.

Barclays said that judging from the most recent market episode that is reminiscent of the current market environment — the Taper Tantrum of 2013 — even if rates stabilize, outflows may continue for quite some time. They noted that for the Taper Tantrum, from March 2013 to January 2014, outflows continued, but muni ratios reached their highest level against Treasuries and started to recover well before that.

“If rates indeed start to stabilize, another near-term support for the muni market is summer redemptions,” they said. This year’s redemptions are slightly below the usual pace (by about $10 billion year-to-date); however, starting in June, “they should become one of the main driving forces.”

Spread widening for all credits was very mild in the first quarter of the year, but there was an observable acceleration in April and May, they said. High-yield munis also have seen significant spread widening since April, they said.

They noted that “spread risk cannot be ignored any more as high inflation and an unrelenting Fed are bound to cause more damage to the economy.”

“At this point, it is hard to envision how this credit widening will end as the Fed is trying hard to engineer a soft landing in its determined fight against inflation,” they said.

“Even for the short end of the curve, where new purchase activities have concentrated, index total returns matched those in the first quarter of 2020,” according to BofA strategists.

These milestones, they said, could “indicate an important shift in the market for the remainder of the year; that is, from rates-driven to largely credit spread-driven moves.”

“More specifically, rates moves may have peaked while credit spread widening becomes the main risk for the remainder of the year,” Li and Rogow said. “As such, investors should stay with high-grade munis in our view.”

Despite these challenges, “timing is everything and there has not been a better time to buy municipal bonds in almost a decade,” said Jeff Timlin, managing partner and head of munis at Sage Advisory Services.

For one, he noted, “yields are at or near decade highs, and muni yields are attractive compared to other fixed-income markets.”

Additionally, muni valuations are attractive. “The worst drawdowns in munis over the last 20 years have been short-lived and painful, with an average drawdown of 8%; however, these periods have consistently been followed by strong rebounds of nearly 9%,” he said.

“A strong seasonal technical environment is setting up munis for high demand,” Timlin said. May and June, which can be weaker months, provide a good entry point to what is usually the strongest period for munis. June and July is a “heavy period of maturing bonds and coupon payments,” leading “to strong flows and favorable technical into late summer,” he said.

Li and Rogow noted, muni market buying has been concentrated in the front end of the curve.

It makes sense, given very high muni-UST ratios, “the ability to capture more of the curve’s yield shorter down the curve (an investor can capture 70% of the curve’s max yield at the three-year currently … but also given its relative attractiveness to other parts of the curve when interest rate risk is taken into account),” they said.

All the same, “it is important to note that even the short end of the curve’s total returns for the year-to-date are negative,” they added.

“While March 2020 returns had its rationale in a liquidity crisis as the economy fell off a cliff,” they said, “today’s high ratio in very short maturities seems to have liquidity and credit implication as well.”

“These implications are hard to justify, since by and large the Fed approach to rate hikes is still gradual in nature despite multiple 50 basis point hikes,” they said. “The Fed would have enough time and room to adjust its posture.”