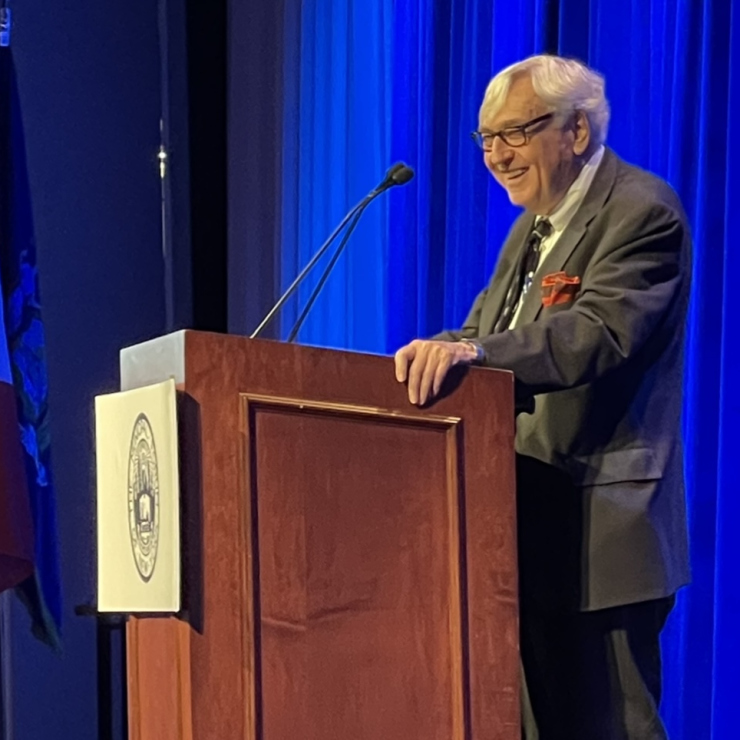 The Municipal Forum of New York honored three industry leaders and awarded a scholarship to an Urban Leadership Fellows at its annual dinner on Thursday.

The three “have dedicated themselves to public finance and public service, people who really make a difference,” said Mary Francoeur, the Forum’s president and managing director at PFM Financial Advisors.

The three were honored at the awards dinner at the Marriott Marquis in Manhattan, the first held in-person since 2019.

Prescott Ulrey, general counsel of the NYC Office of Management and Budget, presented Schaaf the Forum’s Lifetime Achievement Award, and noted his lifelong dedication to the city.

“I hope you realize how much he has contributed to the city that he loves. I cannot even calculate the amount of money that Homer has raised for city roads, bridges, schools, cultural institutions,” Ulrey said. “I can’t imagine any public space in this city that hasn’t benefited from his work.”.

After thanking his family, Schaaf shared his love for New York City, the center of finance and public service.

“Most people come to New York for opportunity. That’s not going to change,” Schaaf said. “The people in this room and many others, we all have the ways and means. The rest of you will continue to provide the opportunity, people will come here from all over.”

New York City Comptroller Brad Lander, who presented Fine the award, said despite some political differences, he never hesitated to reach out and ask for her help throughout their overlapping careers in New York politics. Fine always delivered, Lander said.

“Your wisdom, your guidance, your fairness, the way that you see public service is an extraordinary credit, and that’s why I was so thrilled that you’re getting this Public Service Award,” Lander said.

Fine said she couldn’t help but be humbled by her distinction and often avoids the spotlight.

“This is a little bit of a challenge for me tonight, but a welcome one,” she said. “This is truly an honor, and I congratulate all my co-awardees and [I have] so much great appreciation to the Municipal Forum for this honor.”

Nathaniel Singer, senior managing director of Swap Financial Group, presented Arnone the award and told younger members of the audience to seek out leaders at their firms.

“It’s critical to our industry that we have a strong dealer community that can service our clients. It’s the rare banker that understands how to thread that needle to both meet the needs of the clients and the internal needs of the firm,” Singer said. “Try to find the Kym Arnone in your firm that understands that dynamic and works to strengthen our industry every day.”

Arnone compared her past 30-plus years in the industry to football. “Hard work matters. Preparation really matters. But in the end of the day is about blocking and tackling and a team effort. So thank you to my team. You guys always make me look good,” she said.

Arnone won the 2014 Northeast Women in Public Finance’s Freda Johnson Award, for women who are trailblazers, leaders, innovators and mentors in the industry.

The Koenen award is in honor of Austin Koenen, a former industry leader and outspoken proponent of municipal market overhaul. He died in 1998 at age 56. He was in the municipal market for 24 years, the last eight of which he was the head of — or a managing director in — public finance at Morgan Stanley.

Koenen, a former chairman of the Public Securities Association, pushed for curbs on pay-to-play practices and for increased disclosure.

The dinner also honored former Deputy Director for Financing Policy and Coordination within the mayor’s Office of Management and Budget,Alan Anders, who was also the 2020 Lifetime Achievement Award winner. Anders died in May 2020.

The Forum also paid tribute to Richard Froelich, former chief operating officer and first executive vice president at the New York City Housing Development Corp., who died in 2021. Both were former Forum Board of Governors..

Additionally, the Forum also announced the 2022 winner of the Carey Gabay Scholarship, established in the honor of Gabay, who was an assistant counsel for Gov. Andrew Cuomo in 2011 and served as first deputy counsel for the Empire State Development Corp. He was slain in 2015 at age 43.

The Carey Gabay Excellence Award is a scholarship in the amount of $2,500 awarded annually to a former Urban Leadership Fellows intern.

The 2022 winner is Sahara Majumder. She is a rising senior at Baruch College majoring in Finance. She participated in the 2019 Urban Leadership Fellows Program, working at Public Resources Advisory Group. She is now on track to join BlackRock’s 2022 summer analyst class under the retirement group, something that wouldn’t have been possible with ULF.

“When I first began the Urban Leadership Fellows program, I knew nothing about the financial services industry and only had a slight interest in pursuing a career in this field,” she said. “But because of ULF, I declared myself a finance major in college, and I’ve taken advantage of every related opportunity.”

Created in 1992, the Urban Leadership Fellows program aims to introduce high schooler students to municipal finance and encourage them to pursue jobs in the sector.

It offers paid summer internships to graduating seniors from city high schools with and interest in finance, government, public policy or law. Through the ULF program, 808 students have completed internships, with $1.175 million in college scholarships provided.