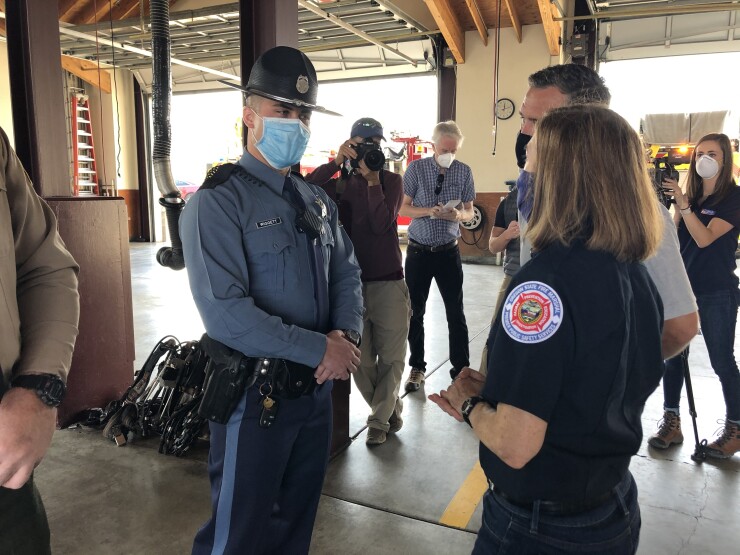 “Already this year, I have had to declare drought emergencies in 15 counties,” said Brown, who terms out this year. “That is the most I have ever had to declare by this time of year, of any, as your governor.”

The normally energetic Brown had a dour expression on her face during the Monday press briefing that came after last week’s emergency drought declaration in three more counties.

“While many regions have experienced rain, in many parts of the state, we are seeing mega drought,” Brown said.

Extreme drought conditions throughout the west, mean that coordinated national efforts to share firefighters and other resources could be stretched thin this year, said Mike Shaw, Oregon Department of Forestry Fire Chief.

The southwest has been wracked by wildfires this spring.

Firefighters in New Mexico are battling the state’s largest in history at the national forest east of Santa Fe. The blaze, which has been burning for a month, had burned 299,656 acres by Tuesday and was 26% contained, according to a Santa Fe National Forest incident report.

Drought, increasing temperatures, overgrown forests and increased development near forests have resulted in more frequent and severe wildfires across much of the west.

Nearly a quarter of the U.S., mostly in the west, is at moderate to very high risk of severe wildfires, according to the U.S. Forest Service. This comes on top of several years of fires that have burned millions of acres in Oregon and California.

The situation had become so bad in California that S&P Global Ratings analysts said in a report last year the state no longer has a “fire season, because it’s become a year-round phenomenon.”

California has experienced the seven largest fires in state history within the past four years. By mid-July in 2021, nearly 450,000 acres had burned in nine fires spread across Oregon, including Bootleg, the fourth-largest in the state’s history.

Increasing interest in ESG-labeled municipal bonds coupled with apparent growth in climate-change related disasters has resulted in more modeling that tracks the impact on the muni industry, among those is risQ, part of ICE’s Sustainable Finance business. An estimated $240 billion of the $3.9 trillion outstanding muni debt is exposed to significant wildfire risk, according to risQ.

“I am really grateful we have committed federal partners with President Biden and Vice President Harris,” Brown said. “We have had meetings with the governors, president and vice president about how we can collaborate.”

The Department of the Interior has been a good neighbor helping to mitigate fires on federal lands and Biden is making sure we have resources on the ground, Brown said.

The bill provides funding for home hardening projects, forest management projects to prevent fires and more money to help fight fires. It was a response to last year’s fires that burned more than 1 million acres in the state.

Utilities are required to develop wildfire mitigation plans that must be approved by state regulators. It also funds a youth corps to work on community preparedness.