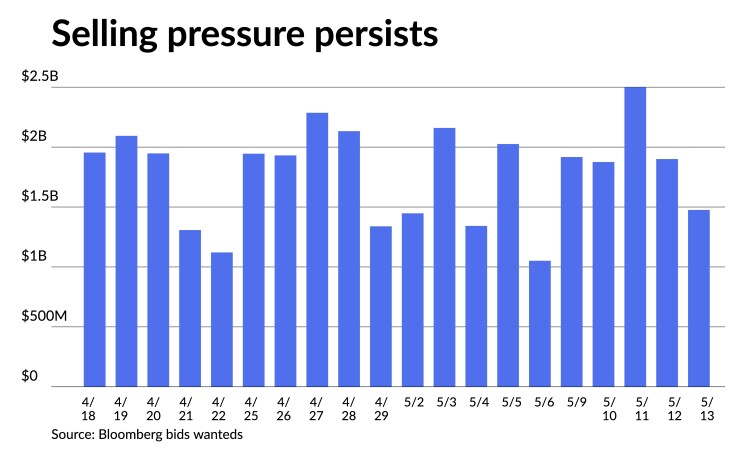 Municipals were little changed and U.S. Treasuries were mixed in what amounted to a relatively quiet day for fixed-income markets, while equities were mixed to end the day.

Municipals took more of a wait-and-see approach ahead of a calendar filled with general obligation bonds from credits across the spectrum.

Deep-in-the-red municipal returns are not helping assuage investor concerns, creating a negative feedback loop that has yet to see a pause.

“The constant barrage of bids-wanteds is a new source of supply into the market, competing with the new-issue calendar for investors’ attention and dealers’ capital,” according to CreditSights’ weekly report.

Year-to-date, $114.35 billion of bonds have been put out for the bid, an average of more than $1.24 billion per day, according to Bloomberg.

“The avalanche of bonds being sold on waning investor demand has resulted in woeful underperformance YTD, including last week when tax-exempts underperformed across the board, notably by +11.3 ratios in 10 years (102.4%) and +9.6 ratios in 30 years (107.8%),” said Peter Block, managing director of credit strategy at Ramirez & Co., in his weekly municipal report.

Municipal to UST levels are cheap and “obviously a solid value, although it appears that cheapness — no matter how measured — in and of itself isn’t a panacea in this unprecedented market environment,” Block said. “We’re afraid that tax-exempts, especially in the 10- to 30-year part of the curve, are likely to get even cheaper before they get richer, at least until there is clarity on inflation.”

The more than 10% losses so far is “the largest loss municipals have had and the third losing year since 2000, when the two others had lost just about 2.5%,” noted Jason Wong, vice president of municipals at AmeriVet Securities Inc.

“Even though ratios are at their highest in nearly 20 months, we still have not reached the bottom as this should continue until the Fed gets a hold on inflation and bring inflation back down to 2%,” Wong said. “With the Fed expected to raise rates a few more times, we can be in for the wild ride for the rest of 2022.”

Miller joins others who have noted that because of current interest rates and ratios, municipals are an attractive fixed-income option. “For those with a long-term fundamental view and cash on hand, this may be an attractive entry point for municipal credit risk,” he said.

“Outsized reinvestment money” is expected in the next few months “that should keep municipal bonds well bid”, Miller said, noting the$44 billion coming on June 1 and the $48 billion on July 1.

Block noted this summer is a critical period as reinvestment peaks June through August.

“The market is likely to see another leg down if weakness persists during this period as reinvestment falls off a cliff in September,” Block said.

The underperformance of munis, relative to the corporate bond market, they said, means that “banks, insurance companies and other taxable investors subject to the 21% federal corporate income tax rate can now buy tax-exempt municipals at yields higher than the after-tax yields on comparably rated corporate bonds.”

While the yields are attractive, they don’t expect those investors to be indiscriminate buyers.

CreditSights strategists said the $61 billion of net mutual fund redemptions “has not only contributed to the supply of secondary market selling,” but has also “reduced demand for the new-issue market.”

They said municipal bond redemptions have picked up in May and will peak in June, helping to stimulate demand.

“Reduced demand in the new-issue market has allowed investors with money to invest to be more selective about which issues to consider and what prices they are willing to pay,” CreditSights strategists said.

They noted that bond structure, especially couponing, is becoming a much more important factor in valuing bonds.

“With 3% and 4% coupon bonds underperforming and often flirting with trading below their market discount cutoff prices, there is an opportunity for investors subject to the 21% federal income tax to consider bonds that are priced using an expected 37% tax rate on the market discount,” they said.

They added that relative values are compelling, as “tax-exempt yields are now competitive with comparably rated corporate bonds.”

“Heightened volatility and extreme changes in spreads are generally a function of market technicals and not of variations in issuer credit conditions,” they said, though there are exceptions.

They see “the mutual fund outflows as the primary catalyst for muni market underperformance” and anticipate that “when net redemptions finally slow down, tax-exempt prices and spreads could react quickly.”