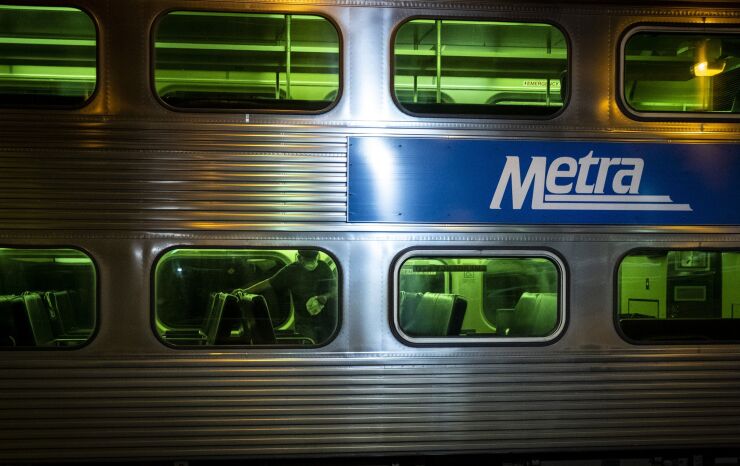 Earlier this month, Moody’s Investors Service upgraded the Illinois Regional Transportation Authority’s $1.7 billion of general obligation bonds to Aa3 from A1 due the “resiliency in the authority’s tax base following a rapid rebound in taxes after the drop in 2020” and “the expectation that state funding will remain stable and timely given improved fiscal conditions of the State of Illinois.” The outlook remains stable.

The state’s past budget woes drove lengthy delays in the transfer of aid forcing the agency to issue short-term notes to manage cash flow.

“The state is currently making distributions in a timely manner,” Moody’s said. “The stable outlook reflects the expectation of revenue stability over the coming one to two years.”

The upgrade is all the more notable as it comes amid public transit’s ongoing ridership struggles. The RTA’s service boards suffered deep fiscal losses as ridership plummeted early in the COVID-19 pandemic. The CTA maintained service levels while the others scaled back some services.

Federal relief totaling $3.37 billion has covered the losses and it’s expected to smooth operations through the third quarter of 2025. The agency also will benefit from the federal infrastructure package.

“This is a critical time for our region’s transit system,” RTA Board Chairman Kirk Dillard said in a statement. “This rating upgrade reflects the RTA’s commitment to strong financial oversight and diligence in working toward improving the system while balancing fiscal realities as we continue to recover from the pandemic.”

Moody’s also raised the CTA’s $2.1 billion of sales tax backed bonds to A1 with a stable outlook from A2 and its $52 million of public building commission bonds to A2 from A3. Moody’s cited the state’s healthier fiscal condition in part for the building commission upgrade but the sales tax upgrade stems from the “resiliency in the tax base supporting the bonds following a rapid rebound in taxes after the drop in 2020.”

Early this week, S&P Global Ratings handed out either a positive outlook or rating upgrades for six seven of the state’s nine public universities it rates. Four are in investment grade territory, three are speculative grade.

The universities have about $1.9 billion of outstanding debt with the flagship accounting for $1.5 billion. Most of it is rated, S&P analyst Jessica Wood said.

“While the state of Illinois has had an inconsistent experience with its budget and performance, higher education appropriations have stabilized in the past couple of years, with funding distributed consistently,” Wood said. “We believe that the state’s improved budget position mitigates the risk of reduced appropriations for Illinois public universities. Instead, we expect to see stable-to-increasing appropriations and therefore, potentially improved financial performance for universities.”

The state’s new $46.5 billion general fund budget raised higher education appropriations by 5% or $248.5 million for universities and community colleges. The higher education budget totaled $2.24 billion with the 5% increase that the Pritzker administration said was the largest annual hike in two decades.

Illinois State University and the flagship University of Illinois are the only schools among the seven with ratings higher than the state’s BBB-plus rating.

The lower-rated campuses continue to struggle with enrollment after several years of declines due to weakened demographics and decisions by potential students to go to out-of-state schools, although S&P said some are bouncing back.

S&P bumped the outlook on the University of Illinois’ A-plus rating to positive from stable.

Southern Illinois University was upgraded two notches to BBB-plus from BBB-minus and assigned a stable outlook based on the state’s improved fiscal picture and SIU’s stabilizing enrollment trend and the university’s solid operations despite the COVID-19 pandemic.