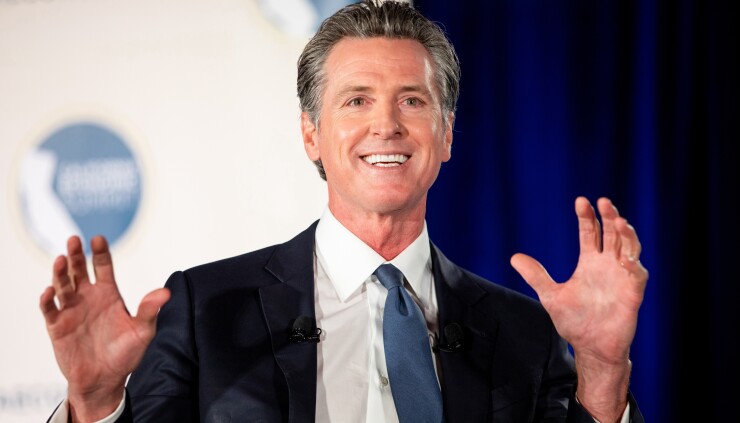 California Gov. Gavin Newsom rolled out an $18 billion inflation-relief package during his May budget revision that included $400 rebates to car owners as well as expanded rental assistance and help covering past-due utility bills.

The state budget boasts a $97.5 billion surplus, according to the governor’s estimates, but lawmakers also face spending restrictions from the 1979 Gann spending limit that requires surplus money be returned to taxpayers if revenues exceed a set ceiling.

“No other state in American history has ever experienced a surplus as large as this,” Newsom said.

The revision includes a $14 billion increase from what Newsom proposed in January for $300.6 billion in total spending. The governor noted the budget is $2.6 billion below the Gann limit.

The state’s budget process gathers speed after the governor’s May revise, culminating in a July 1 budget signing.

In addition to the relief plan to help alleviate inflation expected to exceed 7% in 2021-22, the governor budgeted billions of dollars to alleviate drought and wildfire and suggested the highest per-pupil school funding in the state’s history. The budget dedicates $6.2 billion to reducing long-term debt obligations by pre-paying $2.5 billion in mainly variable-rate general obligation debt and will shift $2.7 billion in capital projects expected to be funded by lease revenue bonds to cash, for a $1.7 billion savings, Newsom said.

It also adds $150 million for Homekey projects to house the homeless and $500 million for interim housing to the $2 billion proposed in January. This comes on top of $12 billion in the fiscal 2021-22 budget dedicated to creating more affordable housing and for homeless programs, Newsom said.

The focus on gas tax rebates could bring more dickering with his fellow Democrats, who want direct relief for everyone, not just car owners, and Republicans who pushed for a gas tax vacation that failed to gain traction.

“We enacted the most comprehensive economic stimulus program in the nation last year, getting billions in immediate relief to millions of Californians,” Newsom said. “But many folks are still struggling, especially with high costs due to inflation, so we’re leveraging this historic surplus to get money back into the pockets of Californians.”

Senate Democrats had proposed a plan for $8 billion of the surplus to go to taxpayer rebates, based on income, as well as grants to low-income residents who don’t file taxes. Newsom proposed an $11 billion package giving rebates to car owners with vehicles under a certain value, though the ceiling hasn’t been determined.

Newsom “rejected the notion,” that legislative leaders are opposed to his gas tax rebate proposal, claiming they wanted to see the extent of the surplus and size of his revised budget before returning to the table on the issue.

Newsom’s plan would provide an $750 million grant to transit agencies so that people could ride public transit for free and lowers the diesel sales tax to 9% from 13% for 12 months.

The governor also proposed sending $1,000 checks to healthcare workers at hospitals and senior facilities that could be matched with a $500 bonus from the facilities, which have faced worker shortages.

“The relief program is the centerpiece of the governor’s May revision, because it provides relief directly to the people,” Keely Bosler, director of the Department of Finance, said in a Thursday media preview.

The gas tax rebates would target people who did not benefit from previous Golden State stimulus checks because they don’t file taxes, like disabled people, by releasing the money based on Department of Motor Vehicle car ownership, Newsom said. Previous checks came through the Franchise Tax Board, which Newsom said is also overwhelmed this time of year handling tax returns. Under the governor’s plan, a third-party vendor would handle the rebates.

The revision also adds $2.1 billion in rent relief for applications received by May 31 and $1.4 billion in additional utility relief for residents who fell behind on bills during pandemic closures in 2021. The utility relief helps all residents, Bosler said, because it staves off rate increases from utilities to cover non-payments.

The nonpartisan Legislative Analyst’s Office released a report Thursday penned by Analyst Frank Jimenez that advises lawmakers to choose a relief plan that: targets relief to the groups it wants to prioritize, can be implemented quickly and efficiently, aligns with its other policy and budget priorities, and helps the state meet its state appropriations limit (SAL) requirements.

The LAO’s guidance leaned away from the governor’s gas rebate proposal in favor of further tax refunds, because they are both broad- and income-based and could be “issued relatively quickly and efficiently given that the state has experience providing such payments through the Golden State Stimulus Program and annual refunds to taxpayers.”

The governor’s proposal would involve hiring a third-party vendor, likely in a no-bid contract to speed the process, to issue gas rebate checks based off of data from the Department of Motor Vehicles, Bosler said.