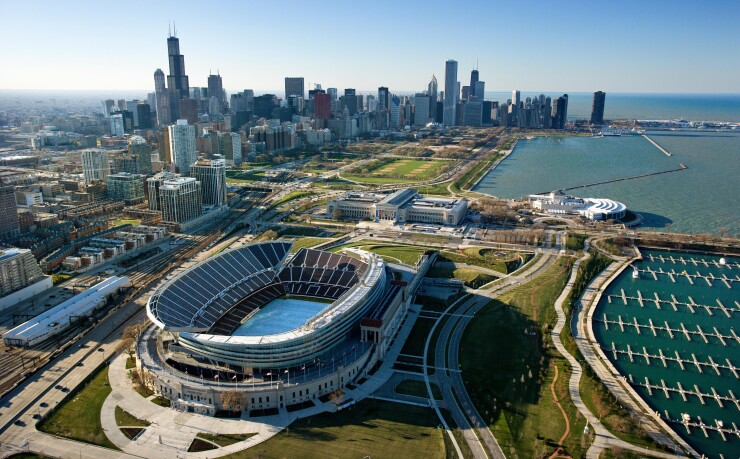 S&P Global Ratings lifted the Illinois Sports Facilities Authority out from junk territory, upgrading the authority to BBB-minus from BB-plus.

The hotel taxes that repay its Soldier Field bonds are on the mend and the agency is no longer putting efforts to spare Chicago’s city government from covering gaps between its tax revenue and debt service.

Hotel taxes still lag the pre-COVID-19 pandemic era and aren’t expected to fully recover until at least 2024, but they are rising and the agency is recommending to its board for a second year in a row that its annual state hotel tax advance — formally known as the “chairman’s certificate” — fully cover debt service on $415 million of outstanding bonds.

The public agency opted not to request the full amount in 2020 to shield the city from making up an expected shortfall that instead was covered with reserves. In July that year, S&P knocked the rating down to BB-plus from BBB.

In addition to plummeting tax collections, S&P viewed the board’s 2020 decision so negatively because it was taken “at the behest of the city and in the aiding of another entity that weakened the security to bondholders,” Buswick said.

The authority’s board is expected to vote on the “chairman certificate” request at its May board meeting later this month.

“We’ve been working with our bond counsel as well as the state and city and our team to get through the tough situation that COVID has put all of us in over the last couple years so we are very happy with the upgrade that recognizes our management through this,” said ISFA Executive Director Frank Bilecki.

In 2020 and 2021, the authority dipped into its own $39 million special reserve and pushed off debt service through a $19 million scoop-and-toss restructuring in order to spare Chicago from having to cover the gap.

As the agency earlier this year projected another shortfall totaling $28 million, board members voiced concerns over the impact any further use of reserves or additional restructuring would have on the agency’s fiscal health. The agency also adheres to an additional bonds test requirement tied to hotel tax collections complicating refinancings.

The agency opted against any further debt actions this year such as taking out a loan or restructuring to cover the gap so the city must cover it.

“We have tapped into reserves. We have refinanced debt. This year we were looking to avoid adding additional debt. That was the concern of our board,” Bilecki said.

The state will withdraw the $28 million from the city’s share of income taxes that are doled out through the Local Government Distributive Fund.

A potential $18 million gap looms for fiscal 2023 and it’s not yet clear whether that again will fall on Chicago to cover next year. “We will talk to our city and state stakeholders and our bond counsel and look at our options,” Bilecki said. “We don’t want to do anything that causes our credit worthiness to deteriorate.”

The authority has $12 million in reserves but must maintain some level under agreements with the White Sox, the Major League Baseball tenant in the authority’s Guaranteed Rate Field.

Under the original 2001 deal Mayor Richard M. Daley struck to renovate the Chicago Park District-owned stadium that is home to the National Football League’s Chicago Bears, the city is on the hook should the authority’s hotel tax and the city and state subsidies fall short of what it needs to eventually repay an “advance” of state hotel taxes pledged to bondholders.

Under the complex structure a “state advance” of up to 60% of a 5% statewide hotel tax is pledged to the bonds but the agency must repay most of that advance at the June 30 fiscal year end. The authority’s revenues come from a local 2% hotel tax, a $5 million annual state subsidy and a $5 million city subsidy. The state can automatically withdraw the amount needed from the city’s share of income tax revenues to cover any gap.

The only past deficiency in the ISFA hotel tax occurred in 2011 when the city had to cover a $185,000 shortfall.

Chicago Chief Financial Officer Jennie Huang Bennett would like a long-term fix and that could come in 2024. The authority’s 2014 bonds become callable then and the state budget package signed last year by Gov. J.B. Pritzker gives the authority room to extend debt to 2033 from the current cap of 2032 by keeping the state “advance” in place a year longer.

The additional one year doesn’t provide too much breathing room but it’s tied to when Bears’ lease expires. The team is eyeing a move to the suburbs, but state legislation could still extend the state advance pledge beyond 2033 and that would allow the agency to further push out the maturity and smooth debt service demands that currently require steady growth.

Whether Pritzker and lawmakers would be amenable to such action is unclear. The state provided $20 million in the fiscal 2022 and 2023 budgets as a backup in case state hotel taxes fell short of what was needed to make the state advance payment pledged to bondholders. That funding was not needed and can’t be used elsewhere to make up for the gap in authority hotel taxes that will fall on the city to cover.

S&P warned the agency it could fall back to junk should the agency fail to request the full chairman’s certificate to fully cover debt service or if it takes actions that provide fiscal relief to Chicago’s government that causes ISFA’s creditworthiness to deteriorate, draws further on reserves without a plan to replenish them, or if coronavirus variants strain tax collections.

Buswick said future scoop-and-toss restructuring isn’t a triggering factor on its own and analysts would have to review the plan to see how it fits into the overall credit profile.

The agency faces a tough balancing act with board members divided between city appointments and state appointments while also being charged with protecting ISFA’s interests and those of its bondholders.

“We do view the board makeup as aiding in the independence needed to do what’s appropriate for the authority and bondholders,” Buswick said.

Most of the authority’s outstanding debt is tied to the Soldier Field renovations. Much of the debt issued in 1989 for Guaranteed Rate Field has been retired.

“Should the team opt to leave early or not renew, ISFA bonds currently mature in 2032, and are not dependent upon activity in stadium,” S&P said.

S&P caps the rating at one notch above the state – rated BBB-plus following an upgrade last week — under its priority lien criteria that takes into account the credit quality of the obligor where taxes are distributed and/or collected and the strength of the security pledged.

Fitch Ratings rates ISFA BB-plus with a stable outlook and has not taken action since upgrading Illinois by two notches last week to BBB-plus. It caps ISFA’s rating one notch below the state’s.

“While there is a cap on the ISFA rating at the state’s appropriation risk rating, we evaluate the ISFA credit’s standalone credit quality and then apply the cap if relevant,” said analyst Eric Kim.