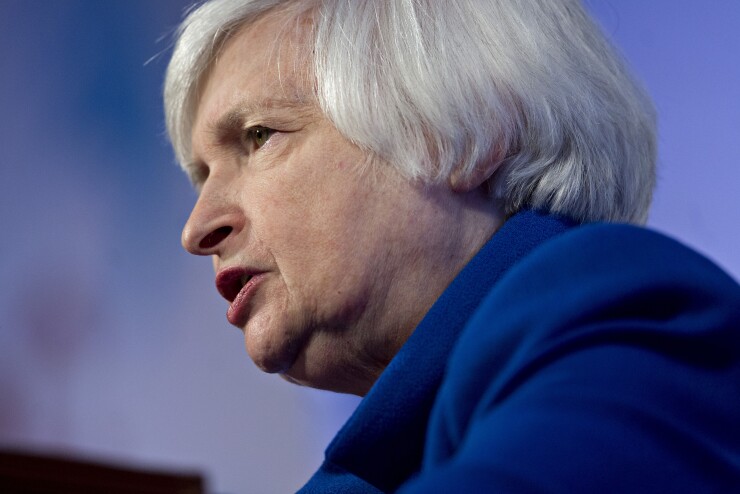 Treasury Secretary Janet Yellen Tuesday defended the use of big pandemic aid packages from accusations that they contribute to inflation, telling lawmakers on the Senate Banking Committee that the stimulus helped avoid what could have been another Great Depression.

Yellen also said the stalled Build Back Better bill would not spark higher inflation – which she and others have identified as a top risk to U.S. financial stability – and added that the federal deficit is expected to decline by $1.5 trillion this year.

Yellen’s testimony focused on the Financial Stability Oversight Council’s annual report. The FSOC was set up in the wake of the 2008 financial crisis to monitor the nation’s financial system, identify its top risks and make recommendations to minimize the risks. Yellen is scheduled to testify Thursday before the House Financial Services Committee.

Inflation, which is at a 40-year high, is expected to be a chief factor in the upcoming midterm elections and the Biden Administration is facing pressure to cool it off. The White House Tuesday released a fact sheet that highlights previously announced measures, including releasing oil from reserves, ahead of new consumer price figures coming out Wednesday.

Senators from both sides of the aisle lamented the rising prices Tuesday, with Republicans blaming it on the Biden Administration’s policies and Democrats pointing to supply chain disruptions and Russia’s war in Ukraine.

Sen. Tim Scott, R-S.C., said the pandemic aid packages led to “an overheating of our economy” and asked Yellen to justify spending more money in the Build Back Better package.

“The American Rescue Plan was a large package that was targeted to the needs particularly of those most severely affected by the pandemic, and if you look at the state of the labor market, the fact that it is so strong, maybe overly hot, is a sign of the success of that program and mitigating what could have been another Great Depression, a risk we should not have been willing to take,” Yellen said.

Build Back Better is “fully paid for through higher tax collections,” she added.

Yellen noted that some analysts have predicted that inflation has peaked, though she said the outlook remains uncertain.

“Inflation is absolutely a problem and it’s critical to address it, but at the same time we should recognize how successful that [ARPA] program was,” she said.

Rising interest rates pose their own threat to some financial institutions, she said.

“In an environment of rising interest rates with high inflation there certainly are risks to banks and to borrowers who are indebted,” she said, adding that although many companies have high debt burdens their debt service costs have remained relatively low.

Leveraged firms like insurance companies or hedge funds “could be vulnerable in a rising interest rate environment,” she said.

Yellen also defended the FOSC’s emphasis on climate change from skeptical GOP senators who said it does not pose an immediate systemic financial risk.

“We need private sector actors including financial institutions to be taking the long view,” Yellen said.

“I’m very supportive of the SEC proposal to require climate related risk” disclosure by firms, she said. “Without this kind of disclosure of climate-related risks, we’re not providing the investor community with the information they need to allocate capital properly.”

Separately, the Federal Reserve Monday released a financial stability report that complements the FSOC’s report, highlighting the risks that inflation, the war in Ukraine and the pandemic pose to the U.S. financial system.

Binance stablecoin BUSD sees a sharp market cap drop amid solvency and mismanagement worries
US and Germany to send main battle tanks to Ukraine
Rent prices have dropped the most in these 5 U.S. metro areas. Why it’s cheaper to rent in many markets
A Luxury Lodge Beckons Along The Unspoiled New Zealand Coastline
Yellen says raising debt limit is only solution to avoid fiscal crisis