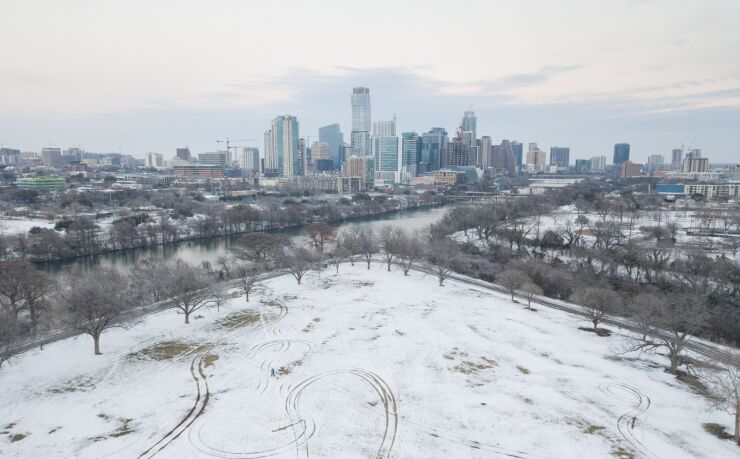 The Texas Natural Gas Securitization Finance Corporation on Friday picked Jefferies to lead a team of underwriters for its upcoming $3.4 billion bond issue for utilities that were hit with high costs during 2021’s Winter Storm Uri.

A few members of that team — Morgan Stanley, one of the deal’s co-senior managers, along with co-managers Barclays and UBS — were selected despite the fact their eligibility to enter into a contract is under review.

The corporation’s selection process, which was launched last month, included state law restrictions on contracts with banks that have policies deemed to be harmful against the firearm and fossil fuel industries.

The Texas Attorney General’s Office revealed in late April that the eligibility of investment banks to enter into contracts to underwrite state debt was under review if they were among 158 U.S. and foreign financial companies that were asked by the state comptroller earlier this year to clarify their fossil fuel investment policies and procedures.

Texas Comptroller Glenn Hegar is tasked with reviewing companies for compliance with a law that prohibits state agencies from investing in entities that “boycott” energy businesses. Texas laws enacted last year also require companies, including investment banks that underwrite muni bonds, to verify they do not boycott energy companies or “discriminate” against the firearms industry as a requirement for contracts valued at $100,000 or more with Texas governmental entities.

JP Morgan Chase, which was contacted by the comptroller and which has been inactive in the Texas market since the laws took effect Sept. 1,  was among the 41 firms vying for a spot on the deal.

The attorney general’s office has advised that contracts for future pricings should allow the issuer, without penalty, to find a replacement should a bank in its deal end up on the comptroller’s list of boycotters.

Deviney declined to comment on whether that provision would be in the corporation’s contracts with underwriters.

The pricing of the natural gas securitization bonds is targeted for mid-August, well beyond the 60-day deadline companies were given to respond to the comptroller’s request or be presumed to be boycotting energy businesses.

Meanwhile, the National Shooting Sports Foundation has objected to the participation in a bond deal in Texas by Citigroup, which was among the banks targeted last year by sponsors of firearms legislation.

Citigroup, which announced a U.S. commercial firearms policy in 2018, has been active in the Texas muni market and was the senior manager for a $1.19 billion Dallas Fort Worth International Airport bond sale this year.

For the upcoming deal, the Public Finance Authority formed the nonprofit corporation to issue the taxable customer rate relief bonds, which will be paid off with charges imposed on customers by eight natural gas utility local distribution companies.

During the storm, those companies, which are authorized to directly pass on gas costs without a markup to customers, incurred huge expenses for the commodity needed to heat homes and businesses.

The Texas Legislature passed a series of bills in response to the storm. For natural gas providers, House Bill 1520 authorized securitization financing to provide customers with rate relief by extending the period over which they will pay the extraordinarily high gas costs.