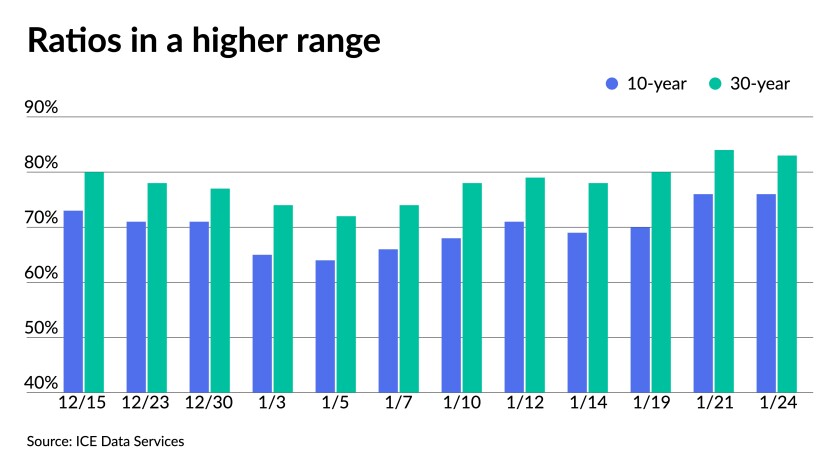 Selling pressure on the short end continued on Monday and triple-A benchmark yields were cut by as much as five basis points there while U.S. Treasuries pared back earlier gains and equities rebounded from a large selloff earlier in the day.

The muni selloff is not a surprise, Nuveen said in a Monday market note. Tax-exempt rates have been rich relative to Treasury bonds and this decline puts tax-exempt rates closer to fair value.

Not only are rates rising, but volatility is also high — it’s at its highest level since the first quarter of 2021 — making investors warier about the municipal market, according to Barclays strategists.

Higher rates have led a majority of U.S. fixed income asset classes to underperform on a total return basis this year, and munis have been no exception, with tax-exempt indices down 1.38% and taxable indices down 2.6% year-to-date.

“We are continuing to watch muni flows, with outflows typically correlated with large rate spikes,” they said. “Not only ratios have started moving higher, but spreads have also begun decompressing, with high-beta names — mainly triple-Bs and some single-As — underperforming.”

“Mutual funds remain cash rich, but appear patient and selective as yields have drifted higher,” Nuveen said. “However, yields and credit spreads are wider than they have been for months. This has gone a long way to resolve the reinvestment risk for persistent cash balances, which bodes well for fund earnings going forward.”

Barclays said that while taxables munis have been outperforming corporates, historically large corporate spread swings have been predecessors to taxable munis’ widening, with the most recent instance being in October. Due to the recent aggressive widening of corporate spreads, muni taxables are anticipated to come under pressure in the near future, they said.

“We expect much more attractive yields and valuations compared with Treasuries, which in the long term should reward patient investors, in our view,” they said.

According to Ramirez & Co., tax-exempts generated negative total returns and underperformed Treasuries for the third week in a row due to market volatility, nascent muni fund outflows and increased secondary market activity.

Tax-exempts are cheaper on a one-year average and moving into the fairly valued range on a three-year basis, Ramirez said. Spreads remain tight, however, as base rates account for most of the yield widening of late. Tax-exempts underperformed last week, led by the two- and 10-year spots.

Munis are expected to underperform for another few weeks as markets remain fragile and investors reevaluate allocations, according to Ramirez. Moreover, U.S. Treasury and muni yields are certain to rise in 2022, although the firm expects flattening of Treasury curves, which together with continued good demand for tax-exempts should translate into outperformance on the long-end of triple-A yield curves.

This week, supply returns to a modest $6.1 billion, of which $4.8 billion, or 78.3% is tax-exempt, led by issues from the Brightline West Passenger Rail Project, the Airport Commission of the City and County of San Francisco and Black Belt Energy Gas District.

Treasuries pared back earlier gains and equities rallied in the late afternoon.

Could Fed raise rates 50 bps in March?
While nearly all economists expect the Federal Open Market Committee to liftoff in March, some analysts believe a 50-basis-point move could be considered.

“Is there a real chance of a 50-basis point hike in March?” asked Christian Scherrmann, U.S. Economist at DWS. “Right now, we don’t think so. But inflation may force the Fed’s hand. If the January and February readings push the annual rate up even higher, the Fed might be under huge pressure to respond with more than a 25-basis point increase in rates.”

Should the Fed decide a larger hike will be needed in March, Greg McBride, Bankrate chief financial analyst, said, “this is the meeting where the Fed needs to begin prepping markets for that possibility.”

It would be reasonable for the Fed to end asset purchases now, he added. “That would better align the Fed with the hawkish inflation stance and better position them to actually let bonds begin rolling off their balance sheet as soon as March.”

But Ed Al-Hussainy, senior interest rate strategist at Columbia Threadneedle Investments, disagreed. “I don’t expect an immediate end to the Fed’s bond buying program as they don’t have much to gain from doing this,” he said. “In March, I expect they’ll extend the pace.”

While the Fed must feel pressure to react to high inflation, officials have pivoted from their position six months ago, he noted. “Is the situation extraordinary enough for them to act right now? No. Remember, the Fed can act at any time, not just at meetings.”

While a March rate increase is expected, followed by two or three more later this year, Al-Hussainy asked whether “100 or 150 basis points is going to slow the economy enough to take inflation out of the system. I don’t buy into the view that we have to sacrifice significant employment to take out inflation, and there’s no evidence that the Fed is trying to do this.”

Standing in the way of any definitive proclamations by the Fed is the Omicron variant, according to Gary Schlossberg, global market strategist at Wells Fargo Investment Institute. “The Fed likely will be taking a cautious view toward telegraphing the pace of rate increases beyond March in the face of Omicron’s threat to first-quarter growth,” he said.

While it appears the number of infections is nearing a peak, which will allow the economy to rebound in the spring, Schlossberg said, “the Fed will be inclined to move cautiously until the extent of the slowdown becomes clearer.”

Additionally, the complicated economic and financial situation makes the Fed “vulnerable to policy errors,” especially, he said, with “housing and financial assets boosted by years of low inflation and subdued interest rates.”

As a result, policymakers “will have to walk a fine line between reining in elevated inflation and moving cautiously enough not to upend the financial market in a way that produces the sort of ‘disorderly market conditions’ requiring an abrupt policy reversal,” Schlossberg added.

And don’t expect any 50 basis point moves, he said. “First, Omicron has made the immediate growth outlook more fragile. Second, price pressures are expected to ease (albeit gradually) during the latter part of the year, lessening fears of runaway inflation. And third, outsized increases of 50 or more basis points often have had an unsettling effect on the financial markets, encouraging their use only when the Fed truly needs to shore up its inflation fighting credentials.”

But Grant Thornton Chief Economist Diane Swonk said, “Dissents pushing the Fed to act more aggressively on rate hikes cannot be ruled out, even as the Fed begins the process of raising rates.”

Federal Reserve Bank of St. Louis President James Bullard, who rotates in as a voter this year, “will be pushing to taper asset purchases even sooner than the Fed decided and could dissent as soon as his first meeting, arguing that the Fed should end asset purchases in February instead of March,” she said.

In less than two months. Swonk said, “the Fed has pivoted from being patient to panicked on inflation.” The voters rotating in “tend to be among the most outspoken on rate hikes,” she said. “Brace for dissents as debate about the pace of rate hikes intensifies.”

But Omicron may stunt economic growth, leaving first quarter GDP “with a 1-handle, but” keeps the Fed on track for a March liftoff, according to a Morgan Stanley research report. “The growth trajectory beyond this quarter will help to shape the path of policy tightening.”

‘Extreme fear’ grips Bitcoin price, but analysts point to signs of a potential reversal
Bill Gates: Crypto Has No Valuable Output — It’s Not Adding to Society Like Other Investments
Moody’s upgrades Louisiana to Aa2
Terra’s meltdown highlights benefits of CEX risk-management systems
Why is Ethereum used for NFTs?