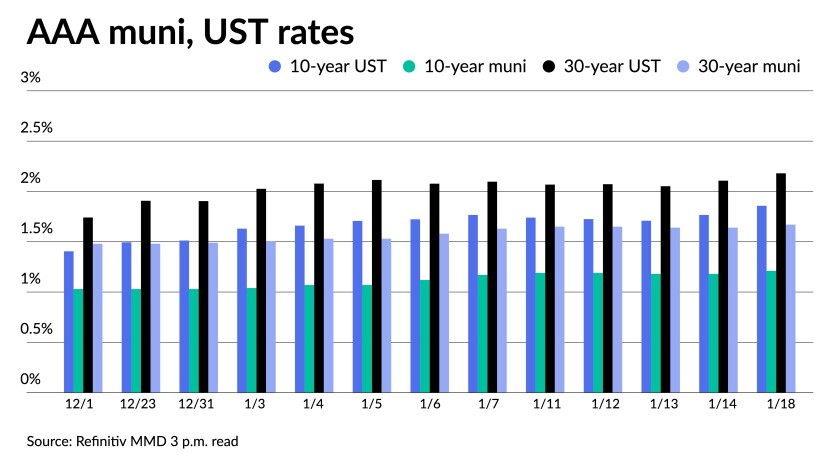 Municipals outperformed another large selloff in U.S. Treasuries that pushed that market to the highest yields since before the pandemic began while equities also saw massive losses as the markets fully digest an expected March rate hike.

As short-term rates climb faster than longer-term rates, the UST curve is projected to flatten even more, said Eric Kazatsky of Bloomberg Intelligence, adding that if inflationary pressures remain, the longer end of the curve may even fall.

“The question for investors then becomes, what have munis done during Fed tightening cycles? The answer: They’ve outperformed,” Kazatsky said.

Municipal ratios have tended to drop during rate hike periods over the last several decades, implying that municipal bond values are richer than similar-duration taxables like U.S. Treasuries. In 2022, this tendency may favor tax-exempts, he said.

With a backdrop of net negative supply, muni reinvestment demands are expected to outnumber available bonds in the remainder of the month, said Jeffrey Lipton, managing director of credit research at Oppenheimer Inc.

“There are still enough days in January to temper the bloodletting, yet admittedly, it would be challenging to finish the month in the green,” he said.

Long-dated muni rates have returned to the zip code of early November 2021, with the 30-year benchmark up as much as 20 basis points on some triple-A scales since the beginning of the year, as U.S. Treasury yields hit levels not seen since pre-pandemic, accompanied by a broad flattening of the Treasury yield curve, according to Lipton

“We are now experiencing the type of market selloff that should offer more compelling entry points for muni investors,” Lipton said. “We are also expanding market exposure to shifting fund flow dynamics with the potential for decelerating inflows and even episodic outflows.”

When it comes to fixed-income performance, Lipton said the move to higher rates has positioned the muni asset class to outperform. Munis tend to outperform Treasuries in weakening markets because of less susceptibility to interest rate changes compared to corporate bonds and better taxable equivalent yields. Other — albeit diluted — variables, such as technicals and even bets on increased taxes, are likely to be help limit the losses in the municipal bond market, he said.

Refinitiv Lipper recorded the first outflow of high-yield muni money since October 2021 last week, although total muni fund flows were positive for the week after 45 weeks of inflows.

“With the tightness of investment grade muni spreads, high-yield would likely demonstrate front-line withdrawals as negative performance ensues for the broader muni market, and investor anxiety emerges within the high-yield space,” Lipton said. “Security selection across the high-yield spectrum should become even more critical to the investment thesis throughout 2022.”

The rise in interest rates will dictate issuer mood in the coming months, and if rates climb quicker than expected, it might have an impact on taxable volume, potentially shelving a number of taxable advance refunding issuances, Lipton said.

Treasuries and equities sold off.

Omicron impact?
The manufacturing sector in New York took a hit apparently as a result of Omicron, and while this may suggest weak gross domestic product in the first quarter, the economy should rebound quickly, which should the Federal Reserve to liftoff in March, analysts said.

The Empire State manufacturing survey’s general business condition index plunged into contractionary territory, falling to -0.7 in January (its first negative reading since June 2020) from 31.9 in December. Economists polled by IFR Markets expected a drop to 25.0.

The surprise declines “presumably” resulted from “the uncertainty and disruption generated by the Omicron variant,” said ING Chief International Economist James Knightley. “New York bore the brunt earlier than other parts of the country.”

But, he noted, the report suggests “obvious downside risks for this week’s Richmond, Chicago and Philly Fed survey,” and given “the weak December retail sales figure and the sharp declines in mobility data, [it] indicates a pretty hefty contraction in economic activity at the turn of the year.”

While Omicron is expected to dissipate quickly, Knightley said, “we think we should see much better activity data from mid-Feb onwards, but it looks as though it will be touch and go as to whether we get a positive or negative U.S. GDP reading for Q1.”

But by next quarter, he expects “very strong” readings as long as “COVID case numbers fall meaningfully.”

While the “case for peak inflation in December … is somewhat supported by this awful report,” she said, it suggests “growth will be slowing in 2022.”

The report showed shorter delivery times and increasing inventories, as they did in the ISM manufacturing PMI, which supports “our view that the supply chain might be clearing modestly just as demand for goods shifts to services,” Tengler said. “Unexpected that unfilled orders fell as hours worked fell as well but that is likely support for our thesis.”

And while the hope is that this is just one report and it’s skewed by Omicron impacts, she said, it raises the question, “if we are slowing and we know emerging and developed economies around the globe are slowing — how aggressive can the Fed be?”

Also released Tuesday, the National Association of Home Builders said builder confidence dipped in January, with its housing market index slipping to 83 from 84 a month earlier.

Economists expected the level to hold.

The index is based on data from the first half of January, noted NAHB Chief Economist Robert Dietz, and therefore “do not fully reflect the recent jump in mortgage interest rates.”

While demand for homes is “solid,” the industry faces lean inventory of homes for sale, he said, while rising building material costs, labor shortages “and higher mortgage rates point to declines for housing affordability in 2022.”