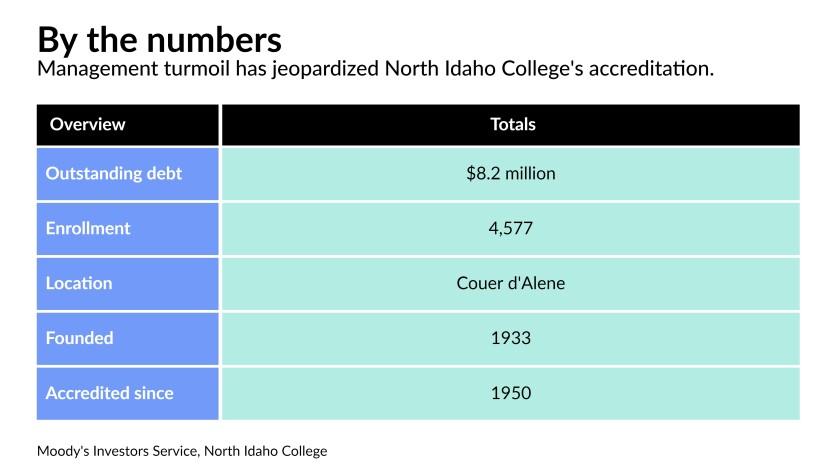 North Idaho College had its outlook revised to negative by Moody’s after management turmoil, including the firing of its president, put the accreditation of the two-year college at risk.

If the two-year college loses accreditation, credits students received for completed classes would not be eligible to transfer to a university. Loss of accreditation could put federal funding at risk and cause enrollment to decline.

Moody’s warned in a December report the turmoil or loss of accreditation could affect enrollment.

The community college, located in Coeur d’Alene, is a feeder school for the University of Idaho in Moscow. The college generated nearly $68 million in operating revenue in fiscal 2021 and had 4,577 students enrolled in fall 2021, Moody’s analysts wrote.

Moody’s revised the outlook to negative from stable and affirmed the college’s A1 issuer and A2 revenue bond ratings.

The college had $8.2 million of debt outstanding as of June 30, 2021, according to Moody’s. The bonds, issued by the Housing Commission of North Idaho College, have a final maturity of 2045.

The revised outlook “primarily reflects governance credibility and board structure risks,” Moody’s analysts wrote. “These risks are highlighted by board dysfunction, with a small group of publicly elected board members and significant turnover at key senior leadership positions.”

Rick MacLennan, who has served as president since 2016, was fired in September without cause, according to the Spokesman Review.

The president’s dismissal came at the hands of Board Chair Todd Banducci, vice chair Greg McKenzie and trustee Michael Barnes in a 3-2 vote after he instituted a mask mandate to protect students against COVID-19 following a surge of cases at northern Idaho hospitals, the Spokesman Review reported.

Three vice presidents resigned after the president was fired.

Michael Sebaaly, who coached wrestling at the college, was selected by the board to serve as interim president until the board could conduct a national search for a replacement.

The “disputes between board members and with college leaders have been public, including the dismissal of the college’s former president and complaints against actions of the board,” Moody’s analysts wrote.

The Northwest Commission on Colleges and Universities, in charge of the school’s accreditation, is planning a visit to assess these governance concerns.

Affirmation of the college’s A1 issuer rating reflects “the college’s important regional role as a provider of two-year education in northern Idaho, healthy operating performance, growing wealth, and manageable leverage. For fiscal 2021, total cash and investments of $69.5 million cover debt and expenses, a strong 8.5 times and 1.2 times, respectively, while unrestricted monthly liquidity of nearly $26 million provides an adequate 167 monthly days cash on hand.”

Those financial strengths, in addition to institutional aid from the federal government provide the college with some stability as it seeks to maintain enrollment amid ongoing governance issues, Moody’s analysts wrote.

Idaho State Board of Education President Kurt Liebich sent a letter to the college’s board and Gov. Brad Little in early December outlining potential repercussions of losing accreditation that asked the school to respond to the accrediting body queries immediately.

“In short, action or inaction by the College’s Board of Trustees that places accreditation at risk would result in long-term injury to the very students you were elected to serve,” Liebich wrote. “It would also significantly impair the College’s ability to recruit and retain students, faculty and staff. Indeed, the very viability of the College itself could hang in the balance. We respectfully request that you set aside parochial or partisan interests, and urgently focus on the best interests of students and the College before both are irreparably harmed.”

Stocks could build on gains in the week ahead as investors await Friday’s jobs report
Stock futures rise following Tuesday’s losses in the Nasdaq
Why is Ethereum used for NFTs?
Puerto Rico Oversight Board adopts revised PRASA fiscal plan
Munis on a tear, yields plummet 45 bps in a week